A new Titanic, and other travel items 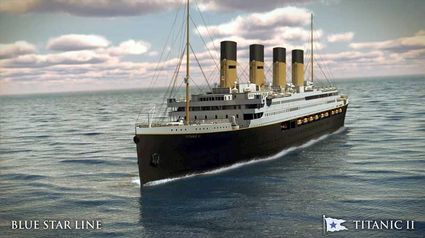 Blue Star Line plans to launch the Titanic II, pictured here in an artist's rendition, in 2016. Company officials promise the vessel will be "every bit as luxurious as her namesake."

Yep, you read that right. In the not-too-distant future a luxurious cruiseship Titanic may once again sail on her maiden voyage from Southampton, England to New York City.

Well, not the original Titanic, of course. That tragic and much-storied vessel remains on the floor of the Atlantic Ocean, having sunk on her maiden voyage to New York after an iceberg opened a gaping hole in the ship’s hull. But you may be able to book passage on a new, modern, luxurious Titanic II sometime in the not-too-distant future. Much of the design and decor will harken back to the original ship which, in her time, was considered one of the most beautiful (and safest) ships in the world.

Things are presently still in the design stage but Blue Star Line Asian Operations Director Raymond Tam has said that Titanic II is scheduled to sail on her maiden passenger voyage from Southampton to New York sometime in 2016.

“Design is well underway on the Titanic II,” said Tam, who stated the vessel will be “every bit as luxurious as her namesake.”

Stay tuned. You may have the opportunity to book passage on one of the most historic voyages of modern times.

Five wise travel tips from a gal who knows her stuff

The following travel advice came to Senior Voice in a news release touting travel for single women, as suggested by travel writer Ruth Yunker. Happily a major portion of the release was equally useful for us male types and for senior couples.

If you have dreamed of taking off on an African safari, jaunting across Europe or sampling fried seahorses in Beijing, Yunker offers valuable advice, including these suggestions I haven’t seen (or have rarely seen) from other writers:

“1. So you want to travel. You are dying to travel. You have a list of 10 favorite places you’re going to get to … one day. Buy the airline ticket six months in advance. A non-refundable ticket. Don’t fret. Don’t get stopped by all the details. Just do it. There. You’ve taken the first step. You can, and will, worry about all the other details later. But baby, with this ticket, you are now on your way.

2. Bring a few creature comforts from home. I bring my own pillowcase for the airline pillows, my ragged at-home comfy wear instead of new sleepware for the hotel or apartment, and a clipboard for working crossword puzzles.

3. Pack only clothes you currently actually wear. Do not buy a ton of new clothes for the trip. A suitcase packed with new clothes is a trip doomed to tears, trust me. The old clothes fit you now. You know without thinking how to look pulled together. The new clothes are uncomfortable. They don’t go with anything yet. And they scream brand new traveler.

4. Bring some currency from your destination country with you. Do it. Everyone will tell you otherwise. They’ll say it’s so much cheaper to change your money once you get there. Maybe. But in the mayhem of the airport, suitcases going in every direction, do you really want to be finding the currency exchange? Just getting to the hotel/apartment will be job enough. So do arrive with Euros or whatever currency you need. It doesn’t have to be a huge sum, just enough to ease your arrival.

5. Once at the hotel, unpack your toilet articles and arrange them in the bathroom in the same order you do at home. It makes things so much easier. It’s so nice to be able to leave the hotel/apartment without having had a meltdown looking for misplaced mascara.

There are, of course, numerous other valuable tips that other writers and travelers might add, including this suggestion from me:

6. Never leave your hotel without a simple map of the city you are visiting. You may think you “know” London like an Englander but you probably don’t. Marilyn and I got hopelessly disoriented in downtown London on one visit and stayed that way for a seemingly endless time. Seemed like at least an hour or more. Then a plump and jolly native of the city came to our rescue and got us oriented.

I’m embarrassed to say we’d been wandering in a daze just three blocks from our hotel.

About Ruth Yunker: She is an author, humorist, columnist, blogger and diehard world traveler. Her peripatetic childhood led to an adulthood always on the move; she has lived all over the United States, from Boston to Los Angeles plus Brussels, Belgium and, for a short time, Paris. Her first book, “Me, Myself and Paris,” recounts her first experiences as a single woman living alone in Paris for three six-week stints. Her newest book, “Paris, I’ve Grown Accustomed to Your Ways,” continues the saga from a more City of Light-experienced perspective.

Princess Cruises relates the company is “delighted” to announce that their new vessel, Royal Princess (3,600 guests!) will be officially named by Her Royal Highness the Duchess of Cambridge.

The ceremony will take place in Southampton, England on June 13. Said a company spokesperson: “We can think of no better way to celebrate our company’s British heritage than by having The Duchess – admired around the world for her style and grace – serve as Godmother to our newest ship.”

Royal Princess will arrive at Ocean Terminal in Southampton, England on Friday, June 7 for a week of festivities before the official inauguration ceremony. After two short preview cruises, Royal Princess will embark on a maiden voyage June 16, followed by Grand Mediterranean cruises throughout the summer and Eastern Caribbean cruises beginning in the fall.

In case you’e curious, I don’t anticipate the vessel will be assigned to Alaska cruising anytime soon.

You can learn more about Royal Princess and Princess Cruises’ other vessels and sailings at Princess.com.

Senior Voice travel correspondent Mike Miller lives in Juneau on the shores of Gastineau Channel where he and wife Marilyn view the comings and goings of big and little cruiseships in the Alaska cruise trade. He and oldest son Kevin publish the comprehensive Web site http://www.AlaskaCruisingReport.com.