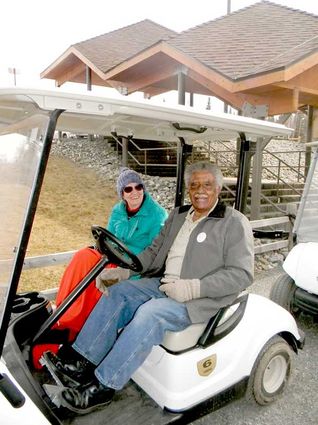 Jessie Davis and Ron Givens prepare to tour the Alaska Zoo during a special Access Day event in May.

It was a caravan of carts, full of givers and receivers, and they were all having fun. The givers were a group of senior volunteers, members of AARP Sourdough Chapter 533. The receivers were people with disabilities. They were all taking part in Access Day, May 15, at the Alaska Zoo in Anchorage. The afternoon may have been breezy, cloudy and cool, but there were warm smiles all around.

Volunteers were driving a fleet of a dozen golf carts provided by the Anchorage Golf Course, just down O’Malley Road from the Alaska Zoo.

The zoo itself had done much to see that this Access Day could happen. Staff put up signage, arrows showing the route for the carts, ambling over the winding trails. Gates normally closed at a back area, beyond the sheep’s rocky hill, had been opened to provide the best access for the golf carts. The zoo was giving out coffee and hot chocolate to warm up the volunteers.

Access Days have been planned at the zoo for the second and third Wednesdays of both May and September for several years, providing the opportunity for people who are unable to walk the trails to travel around the grounds in the carts.

Jessie Davis was one of about 48 people May 15, happy to be in the cart caravan. Bundled up but grinning widely, she commented, “I’ve enjoyed every bit of this ride. It’s been a real good time. I was injured some time ago, and hadn’t been able to tour the zoo and see the animals until now. I loved it.”

Another cart driver, Richard Mitchell, looked particularly jolly seated in his cart, waiting to take on a passenger.

“I like seeing smiles on peoples’ faces,” he explained. He’s an experienced joy-bringer, having been the Nordstrom Santa this past December.

“This lets me be a kind of Santa, a kind of gift-giver at a different time of year.”

No one is exactly sure when these Access Days, began. But it is agreed that the originator of the project was Peg Stout, about 15 years ago.

Peg was on hand May 15, greeting the busloads of people coming to the zoo from six different agencies. Recently widowed and the mother of Iditarod musher, DeeDee Jonrowe, Peg explained that she’s always been a doer and someone in need of a project.

“I lost my husband Ken just two weeks ago. I feel I’m entering another realm and should decide what projects to give up, but I can’t give up Ushering in the Arts, volunteering for Visit Anchorage or the Anchorage Museum, and I love people and animals so this project at the Zoo is so self-satisfying. I love this. I’m 84, and I can’t give this up.

Then she’s off to say hello to another group arriving to ride the carts.

There is potential for chaos as the busloads come in, many individuals using wheelchairs and walkers or canes, mixing with buses full of jubilant school kids coming for end-of-the year visits to the zoo, along with the fleet of golf carts coming and going from the Access Day tours.

Pat Lampi, executive director of the Alaska Zoo, says that the school district has been advised of the Access Days and has been very cooperative in encouraging teachers not to plan their field trips on these days. But the inevitable does happen, and the kids are there.

So how does everything seem to happen so smoothly? Heads turn to one couple, Diane and Dennis Allen, for the answer. Seemingly unruffled and constantly pleased by the whole experience, they have become the organizers of this project for several years.

“We love it,” Diane states, joining the chorus of joyful comments coming from the other volunteers. “The zoo is wonderful to work with, the Anchorage Golf Course is super, even donating the gas for the carts. We have the same drivers jumping to come back for each Access Day. We have a blast.”

Diane begins calling senior centers and other agencies weeks before each Access Day, carefully scheduling them for crowd control. But this day, when she pulled into the zoo parking lot, there was a busload of 19 seniors from one center, waiting there, unexpected, unscheduled.

And soon she had them headed off on the carts.

Pat Lampi takes pride in making the Alaska Zoo as accessible as possible, every day, not just on Access Days.

“We are generally ADA compliant, following the Americans with Disabilities Act,” he comments. “Of course, that’s not the easiest thing with the seasonal changes, frost heaves, the mud, the creek and hillside topography. It’s a shifting terrain. We try to keep accessibility a focus and make changes to accommodate people. The trails, bridges and ramps are wide, but the whole process is ongoing. We put gravel down for the ice and snow, then have to pick it up for the warmer months. We keep two golf carts, owned by the zoo, and if people give us lead time, call ahead, we can usually arrange for them to be available, on call, along with a volunteer driver.”

Diane and Dennis are often the recipients of that request for a volunteer driver – spring, summer and fall. Both are well into their 70s, it’s what they like to do. They are happy givers, volunteers making access to the trails and animals at the zoo possible. 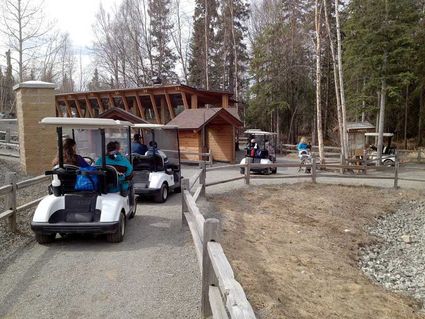 The caravan of golf carts makes its way along wide zoo trails.

On the receiving end are the many people experiencing disabilities, people who might otherwise be unable to enjoy all that the zoo has to offer. Smiles all around!