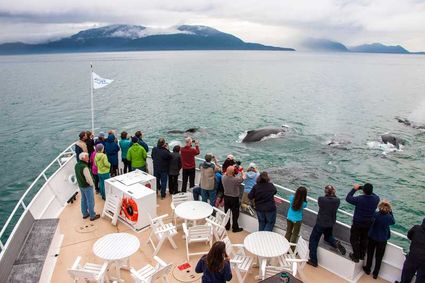 Humpback whales put on a show for guests on board the Wilderness Explorer in Alaska.

A few issues back I described the Hawaii tour that Un-Cruise Adventures has scheduled for 2014. Here’s more information about more adventures that the cruiseline with the funny (but descriptive) name has on tap for their  “Active,” “Luxury” and “Heritage” sailings in 2014.

Newly announced is an all-Washington itinerary, the addition of an eighth vessel to sail year-round in Mexico, and new Heritage Adventures in Alaska and on the Columbia and Snake Rivers.

Wife Marilyn and I have traveled with the company several times, starting decades ago on a newly acquired vessel called Obsession, sailing a then-newly developed cruise through northern Southeast Alaska. On that trip and others we’ve never failed to enjoy ourselves immensely.

Next year’s offerings promise more of the same quality. Joining the fleet in December 2013, the renovated 64-guest Safari Voyager will initiate Luxury Adventures tours year-round in Mexico’s Sea of Cortés on four different itineraries – all new.  They include:

• A weeklong “Cousteau’s Aquarium of the World” cruise that sails roundtrip from San José del Cabo and visits two ports—Loreto and La Paz—with an emphasis on encountering whale sharks.

Multiple days exploring inside Glacier Bay National Park is a highlight of many itineraries.

To book or to request additional information, contact a travel agent or Un-Cruise Adventures at 888-862-8881 or sales@un-cruise.com.

New realities on the ferry front

Well I got a real scare the other day. I was listening to a radio newscast (with, as they say, just half an ear) when I heard what seemed to be an announcement that some programs of vital importance to seniors were on the chopping block as a result of $3.5 million in ferry operation reductions by the just-adjourned state legislature.

Being a senior as well as a travel writer my thoughts raced immediately to the question of the ferry travel discount currently allowed for senior travel.

Later I even heard that food service as we now know it on the ferries was being suspended. Instead, travelers would have to make do with food dispensed by machines. Ugh! And how could you ever access a dry martini in the bar from a drop-down dispenser? Happily that rumor is apparently not quite true. But food service could change dramatically. (Keep reading.)

Also rumored to be on the chopping block was the entire vehicle driver-rides-free program.

Here’s the situation as communicated to me by a DOTPF spokesperson:

“Alaska Marine Highway System (AMHS) is suspending the ‘30 percent round trip’ travel special for the winter schedule. The ‘Round Trip Driver Goes Free’ travel special during the 2014 summer will also be discontinued; which will not go into effect until the Summer 2014 schedule is released this fall.

“AMHS will continue to offer the ‘Driver Goes Free’ travel special for the winter schedule as well as the year-round discounted fares for senior citizens and children. The disabled veteran and disabled traveler passes will also remain unchanged.

“Also, the food service offered on AMHS ferries is not slated for any changes at this time. It has been up for discussion on how to offer food service aboard the new Day Boat Alaska Class Ferries. At this time it’s more likely that food service on the new ferries will be similar to what is available on the fast ferries Fairweather and Chenega. However, it’s too early to provide exact details.”

Children (read: your younger grandkids) under the age of six travel free on the AMHS. Children between the ages of 6-11 travel for approximately half price and children 12 and older travel at adult fares.

Cunard Line’s flagship Queen Mary 2 will mark a major milestone on her 6 July 2013 voyage from New York to Southampton, achieving her 200th trans-Atlantic crossing in her ninth season since entering service in 2004. The milestone will be commemorated with various activities and special speakers and performers on board to add to the celebratory mood.

“Sailing a trans-Atlantic crossing aboard our flagship Queen Mary 2 is a luxury travel experience like no other,” said Peter Shanks, president of Cunard Line. “And now with 200 crossings under her belt, the grandest ocean liner in the world has proven to be the icon of the new golden age of ocean travel across the Atlantic.”

Adding to the festivities will be 16 musicians, plus a band leader and vocalist, from the world-renowned Juilliard School of Dance, Drama and Music. The group will perform as a jazz orchestra providing a selection of big band, swing and Glenn Miller style music and smaller ensemble pieces. Other Juilliard performances will include an evening event in the Royal Court Theatre with full orchestra and vocalist, an afternoon tea dance, lunch time jam sessions featuring an ensemble in the Chart Room, and a late evening ensemble in Illuminations. The band leader and members of the orchestra will also give two jazz master class lectures and a live Q&A.

Queen Mary 2 is still the largest, longest, tallest, widest and most expensive ocean liner ever built. She is also the fastest passenger ship in the world.

In total, Queen Mary 2 has served 22.4 million meals and sailed over 600,000 nautical miles during her first 200 crossings. These figures do not take into account her annual World Cruise or her sailings to the Canaries, fjords, Iceland, Belgium, the Netherlands, Luxembourg, around Britain, up to Montreal and Quebec in Canada, or among the Caribbean islands.

Special promotional fares for the 200th trans-Atlantic crossing start from $1,399 per person.

Time to brag a little. Again.

The Milepost’s new 2013 issue (a whopping 8.5 by 11.5  inches in width and depth, with no fewer than 760 travel-information-crammed pages) is once again on newsstands nationwide. Even for long-term knowledgeable Alaskans the book is a treasure trove of travel information about our state.

I’m happy to say the Milepost editor has once again enlisted me to provide a rundown of cruises and cruiseships in the 2013 Alaska cruise trade.

Especially if you have relatives or friends planning a visit this year you might consider recommending the publication.

Mike Miller has lived in Alaska since 1954 when he and his wife Marilyn arrived in Ketchikan. Mike and his oldest son Kevin publish an Alaska cruising Web site, http://www.AlaskaCruisingReport.com.