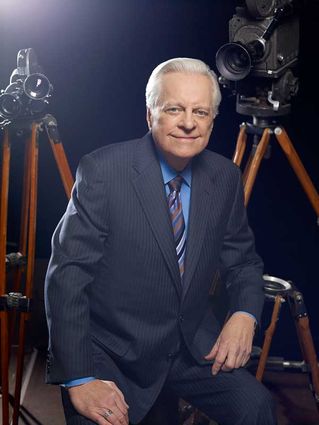 Anyone who watches Robert Osborne’s Turner Classic Movies film introductions has probably heard him say a hundred times ‘this is one of my favorite films...’ But if stranded on a desert island with only one film to watch over and over again, which would he choose?

Long-time Turner Classic Movies host Robert Osborne has interviewed just about every Hollywood star imaginable over the past 60 years – a dream job that any classic movie fan would envy. Although he dabbled briefly in acting, including the 1962 pilot episode of “The Beverly Hillbillies,” he became a journalist for the Hollywood Reporter. After accepting an offer as temporary host for an entertainment segment on CBS in New York, he fell in love with the city and television, and remained in both ever since.

Robert’s movie knowledge and relaxed interview style has made him the “rock star” of classic film audiences.

“I like to think they are more conversations,” he said of his approach to interviewing, when we met recently. “I do my research before an interview, and will have one or two questions to get started. Then I let it flow from there. For example, when I interviewed Peter O’Toole for a TCM Film Festival, he really led the conversation with his interesting stories and even talked about his time in the navy, which he said he had never spoken about before.”

He’s also not surprised with the continued popularity of classic films.

“The world seems so full of chaos these days and we’re constantly bombarded with depressing news. TCM has come to be an oasis for its viewers because many of the movies are from an era where films left you with a positive feeling. Even in dramas, the good guy would usually win.”

Good guys and villains, Robert has known most. But was there someone he desperately wanted to interview but never did?

“I got to most of them,” he answered. “But I’d love to have interviewed the Robert Taylors and Tyrone Powers of the world. I never met Greta Garbo, and am actually glad because I was afraid if I did the illusion about her would have been lost.”

What about the most difficult interview?

“That was Robert Mitchum,” he answered without much hesitation. “We had him do a Private Screenings interview, and at lunchtime he was quite chatty – a great raconteur and talker. But as soon as we went on camera, he’d clam up! I asked him ‘When you first met Jane Russell, what was your impression of her?’ He said, ‘Don’t remember.’ I asked ‘Which of your movies would be the best representative of your work?’ He answered, ‘You decide.’ He was deliberately being a scoundrel.”

Anyone who watches Robert’s TCM film introductions has probably heard him say a hundred times “this is one of my favorite films….” But if stranded on a desert island with only one film to watch over and over again, which would he choose?

“Probably ‘Singin’ in the Rain,’” he said after a brief pause. “Because the music would cheer me up, with one great number after another, it’s funny, and wonderfully entertaining.”

Not surprisingly, with his connection to film, Robert is also a bit of a collector.

“I collect movie posters, but now really have pretty much everything I want.”

And he has some interesting memorabilia.

So is an autobiography in the works to document his many celebrity encounters?

“I’m not thinking about a book and the main reason is because I’m still writing so much for TCM. If I had any free time, spending it behind a computer would not be very appealing right now. However, I did write ‘80 Years of the Oscar’ in 2008 and I’ve been thinking it’s about time to do an update.”

Meeting Robert in person also confirmed what his fans have long suspected: he really seems to be that genuine, soft-spoken, and modest host we see on screen each week.

“I’m flattered that people enjoy what I do and it’s amazing how many people are so passionate about the classics.”

Nick Thomas’ features and columns have appeared in more than 300 magazines and newspapers, and he is the author of “Raised by the Stars,” published by McFarland. He can be reached at his blog: http://getnickt.blogspot.com.