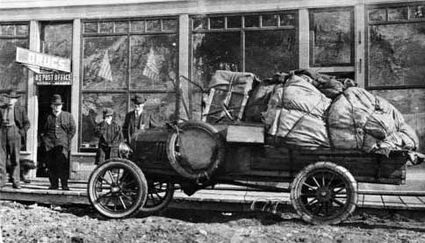 In 1913, Robert E. Sheldon became the first person to drive a car between Fairbanks and Valdez. It was a Model T, like this one loaded with mail at Chitina in 1918.

One of Alaska’s trailblazers made history 100 years ago this month. Robert E. “Bobby” Sheldon made the first automobile trip over the wagon trail from Fairbanks to Valdez in July 1913.

Sheldon had another first before that feat. He built the first automobile in Alaska.

Sheldon and his father arrived in Skagway from Snohomish, Wash., in 1883, on their way to the Klondike gold fields. However, Sheldon’s father died and left him to fend for himself at the age of 14. The boy survived by selling newspapers, and in his spare time, he read everything he could lay his hands on and took correspondence courses. He was a natural mechanic and got work in the engine rooms of the small steamers operating between Skagway, Dyea and Juneau.

Sheldon also worked on the Bracket wagon road and the White Pass and Yukon Railroad, besides working on boats. So it was natural that his imagination would be caught by the new-fangled mode of transportation in the early 1900s.

“There was this beautiful girl there in Skagway,” Sheldon said later, “and I was trying to beat another fellow’s time. He was the son of a banker and had the use of his father’s horse and buggy, which was a luxury in Skagway in those days. I didn’t have a horse and buggy, and had no immediate prospects of getting either. One night I had the idea of building one of those new gasoline engine-powered buggies I had been reading about.”

His funds were limited, but he finally located four buggy wheels and built a frame on them. He then salvaged an old marine engine from a deserted boat, put some gears on it and made a chain drive. When his project was complete, Sheldon’s creation could carry two passengers at the dizzying speed of 15 mph.

Sheldon left Skagway in 1908 and landed in Fairbanks, where he became manager of the Fairbanks Northern Commercial Power Plant. He also brought his interest in automobiles to the interior city.

After studying various models through catalogs, he ordered a four-passenger Model-T Ford convertible touring car. The Detroit price was $390. But by the time it was shipped by rail to Seattle, by boat to St. Michael, by riverboat up the Yukon, Tanana and Chena rivers to Fairbanks, the cost came to $1,297.

Within two weeks of the car’s arrival, he recovered that sum and more by whizzing up and down dirt wagon roads with passengers giving him gold for the rides.

When friends asked him to drive them 120 miles down the Richardson Trail to Donnelley Roadhouse for a fee of $100, Sheldon didn’t hesitate. The Model T made the trip in seven hours – it took five days by horse and wagon. That experience sold Sheldon on the lucrative possibilities of commercial automobile transportation in Alaska.

He quit his job at Northern Commercial and set out on July 29, 1913, to try the impossible – an automobile trip over the wagon trail to Valdez. He and his three passengers jolted over washouts, plowed through slides and mud and forded unbridged steams. One passenger bailed out at Donnelley, but the other two continued the journey, arriving in Valdez at 11 p.m. Aug. 2. The car had made the 370-mile trip in 59 hours actual driving time.

After completing the first automobile trip to Valdez, Sheldon sold the Model T for $1,300 and pedaled back to Fairbanks on a bicycle. That gave him the distinction of becoming the first person to ride a bike from Valdez to Fairbanks.

This column features tidbits found among the writings of the late Alaska historian, Phyllis Downing Carlson. Her niece, Laurel Downing Bill, is turning many of Carlson’s stories into a series of books titled “Aunt Phil’s Trunk.” Volumes 1-4 are available at bookstores and gift shops throughout Alaska, as well as online at http://www.auntphilstrunk.com.