Will one of these New Mexico sites become an Eighth Wonder of the World?

Taos Pueblo has been named one of Budget Travel’s “top 10 places every American should see.” Most recently, CNN Travel called a visit there one of the top 10 “classic American experiences” that the U.S. has to offer.

New Mexico sites an Eighth Wonder of the World?

Years ago (make that at least a half century ago) when Marilyn and I were in our twenties and newly married we traveled with her parents to New Mexico. I’d been there before but that didn’t count. I was only a two-year-old at the time and after a year our family moved to Kansas. Obviously I had no memory of New Mexico, and the trip with Marilyn’s mom and dad was a happy eye-opener.

In terms of travel attractions, New Mexico may well contain some of America’s best kept cultural and scenic secrets. And certainly not least of these are the Taos Pueblo in Taos and Bandelier National Monument in Los Alamos.

Both are in contention with more than 200 other sites worldwide to win the honor of becoming the  “Eighth Wonder of the World” – as determined in a voting contest sponsored by a website named VirtualTourist.com.

Truth to tell, I’m not at all sure who or what agency even has the worldwide authority to “officially” determine the “Eighth Wonder of the World.” But somehow the website above has assumed that mantle and these two New Mexico entities are in contention. I’ve got to say, they both are indeed “world class.” I wish each of them well in the balloting.

Public voting for the Eighth Wonder has already begun and continues through Sept. 30, 2013 at http://www.virtualtourist.com/8thwonder. There are hundreds of nominees at the site, with picture and brief description of each.

Giampiero Ambrosi, General Manager, notes that “members and visitors to our site have been to almost every country in the world. We are eager to see which landmark they will choose to be crowned “Eighth Wonder of the World.”

About Taos Pueblo: Taos Pueblo is already the only living Native American community to be designated both a World Heritage Site by UNESCO and also a National Historic Landmark. Taos Pueblo also has been named as one of Budget Travel’s “top 10 places every American should see.” Most recently CNN Travel called a visit there one of the top 10 “Classic American Experiences” that the U.S. has to offer.

The marvel of the community is that Taos Pueblo’s awesome multi-storied adobe homes (see photo) have been continuously – repeat continuously –  inhabited for more than 1,000 years. Which gives visitors a sense that time, in many respects, stands still thereabouts.

Visitors truly are able to glimpse into the past in San Geronimo (or St. Jerome) Chapel, which is named for the patron saint of Taos Pueblo. The structure dates back to its construction at its present site since 1850 when it replaced the original church destroyed in the Mexican-American War of 1847.

Like their ancient local counterparts, Taos Pueblo artists use clay from the Sangre de Cristo mountains for their micaceous pottery, and local dirt to mud their adobe pueblos.

Throughout the year Taos Pueblo has several ceremonial feast days that celebrate Catholic patron saints. Most are open to the public. (Traditional dances and religious ceremonies are sacred, and may not be photographed.)

About Bandelier National Monument: Los Alamos, New Mexico, was recently dubbed by Smithsonian Magazine as one of the top 10 “Best Small Towns to Visit in 2013.” A big reason for the nomination was because of Bandelier National Monument. This national parkland protects over 33,000 acres of rugged but gorgeously beautiful canyon and mesa country – as well as evidence of a human presence that goes back over 11,000 years.

Petroglyphs, dwellings carved into the soft rock cliffs, and standing masonry walls pay tribute to the early days of a culture that still survives in the surrounding communities.

With 70 miles of trails in the officially designated wilderness areas, visitors may take a long or short hike along trails that provide easy access to dwellings  – including Alcove House and Tsankawi Ruin built between 1400 and 1600 AD. Guided hikes and moonlit hikes, evening ranger programs, cultural demonstrations, and interpretive programs are available throughout the summer.

Visitor center hours at Bandelier are from 9 a.m. to 4:30 p.m. year round. Call or visit Bandelier’s site for entry fees. Camping is also available at Juniper Campground and Ponderosa Campground. Visit http://www.nps.gov/band/index.htm for complete details, prices, events and more. Or call (505) 672-3861, extension 517.

Behold these other Wonders

As long as we’re talking about “Seven Wonders” can you name any or all of the varied Seven Wonder listings? Here’s the expansive answer I got when I queried Google on my computer:

Seven Wonders of the Ancient World: Great Pyramid of Giza; Hanging Gardens of Babylon; Statue of Zeus at Olympia; Temple of Artemis at Ephesus; Mausoleum of Maussollos at Halicarnassus; Colossus of Rhodes; Lighthouse of Alexandria.

The New Seven Wonders of the World: The Taj Mahal in Agra, India; Chichen Itza in Yucatán, Mexico; The Great Wall of China, China; The Christ Reedemeer in Rio, Brazil; Petra in Jordan; Machu Picchu in Cuzco, Peru; Colosseum in Rome, Italy.

Travel really is going to the dogs

There are two ways a pet owner can take a vacation: With, or without, Fido (or Sport, Tiger, Jezebel or whatever you call your “best friend”). In our family during the child-rearing years of two girls and one boy we always took our canines along on our auto-camping trips. Sure, they required a little bit more effort, but who really cared?

And sometimes our pets provided the most memorable moments of a trip. Like one very early morning on a camping adventure along Alaska’s portion of the Alaska Highway when we awoke to hear frantic growls, barks, scraping of tiny feet and violent gnashing of teeth.

“Must be a bear in camp,” I whispered in reply. I then oh-so-quietly and carefully opened the flap of our tent and oh-so-slightly I peered outside. There, just below me and backed up to the tent was Angel, our gentle pet Shetland Sheep Dog-turned-ferocious watchdog, barking as loud as her squeaky little voice permitted. Then, opening the tent flap further so that Marilyn and the kids could also see, we spotted the source of Angel’s concern and obvious anger.

But first, a little background: The night before this episode Marilyn had strung a clothesline of sorts between two trees close by our tent and then draped over it, for airing out, a blanket we always packed along on our camping forays.

There, in the center of the blanket, was pictured a great big black grinning pussy cat – teeth exposed and grinning in obvious pleasure at the commotion it might cause! To make the scene seem even more “threatening”, little gusts of wind were causing the blanket to flap gently, giving life-like motion to the cat.

We were a long time in calming down our poor Angel but treats and lots of attention finally convinced her we could take down the blanket and get on with our vacationing.

Why do I tell you this story?  Well, it’s a lead-in to inform you of a website devoted to the 60 percent of U.S. travelers who (the website claims) bring their pooches along on vacations.

Called “The Uncommon Dog,” the site offers virtually everything a well-traveled pet could need or want.

Among hundreds of items listed and pictured at the site: A doggie car seat, crash-tested to the same standards as a child safety system; Buddy Bed® Memory Foam Folding Travel Beds that eliminate the vibration and bumps of car travel; The DoggyRide Novel10 Dog Bike Trailer from Dutch Dog Designs; and for pets needing a little help in and out of a vehicle, owners can try the Solvit Deluxe Telescoping Pet Ramp.

This is embarrassing: Two months ago, in the April issue, I devoted this entire column to the then-upcoming Yakutat Tern Festival –  describing scheduled events, guest speakers, field trips, tours and other fun and educational events. Turns out, however, the events I described as planned for 2013 were actually from last year’s festival, labeled as such and reported by the sponsors to show the good times had by all last year. 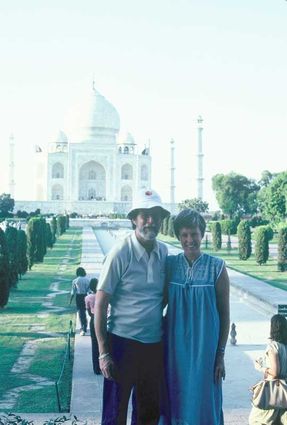 Recognize the couple in this 1978 photo? The guy in the hat is Senior Voice’s then travel-correspondent-to-be Mike Miller and the smiling young lady is his wife Marilyn. Mike was (and remains) a member of the Society of American Travel Writers and the organization’s convention site that year was India. Pictured behind them is the Taj Mahal, recognized as one of the “new” Seven Wonders of the World.

Apologies to the good folk who planned and delivered an outstanding-as-usual event this year and will no doubt do so again in 2014.

I promise, I’ll get the dates right next time.

Mike Miller lives in Juneau where he reports on Alaska and world-wide travel. With oldest son Kevin Miller he also publishes a popular website, http://www.AlaskaCruisingReport.com.