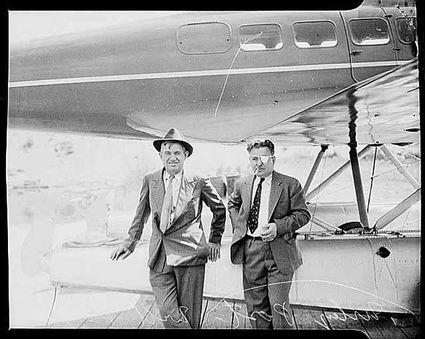 Will Rogers, left, and Wiley Post, seen here prior to taking off from Renton Field near Seattle, died after their Lockheed Orion-Explorer crashed near Point Barrow on Aug. 15, 1935.

When rescuers arrived on the scene of an airplane crash near Point Barrow on Aug. 15, 1935, they found humorist Will Rogers dead. A typewriter recovered in the wreckage had Rogers’ unfinished last “piece for the papers,” and the final word he’d typed was “death.”

But Rogers didn’t seem to have had a premonition that his trip to Alaska would end in disaster. In an interview in Portland, Ore., a short time before the tragedy, he was asked, “When are you going to write a book on your life?”

Aviator Wiley Post had invited him to fly to Alaska. Post had been here before and wanted to come back and see if it would be feasible to start a mail and passenger route between Alaska and Russia.

“I have never been to that Alaska,” Rogers had written once. “I am crazy to go up there sometime.”

Their plans were vague when they took off from Seattle for the “Roof of the World,” Point Barrow. Rogers was paying the expenses, and they had half-formed plans of flying around the world by way of Siberia, China, Ethiopia, Europe and Greenland.

“No danger with old Wiley,” Rogers was heard to say. “He’s the most careful pilot I know. Amelia Earhart told me she considered him the greatest flyer in the world!”

During their Alaska adventure, the pair landed in Palmer for a visit with the Matanuska Valley colonists. Rogers was in high spirits, and even before he was out of the plane, there was a crowd around him, standing in weeds almost knee high. They wanted to laugh and Rogers never disappointed an audience.

Rogers and Post next traveled to Fairbanks, spending time with aviator Joe Crossen, and then decided to head north, although the weather reports from Barrow were unpromising. Stanley Morgan, in charge of the weather station there, warned that the fog was impossible, but Post finally made the decision.

They took off and headed north, but something went horribly wrong. After clearing through the mountains, they eventually got lost in the fog.

Natives tending reindeer about 90 miles from Barrow heard the sound of a plane flying about as though lost over the tundra. A trapper reported hearing the plane, too, but was unable to see it. And a similar report came from a man who had heard the plane above Point Tangent.

Post landed on a small lagoon at Walakpa, learned they were only a few miles away from Barrow, and took off again. They crashed back into the lagoon.

The cause of the crash has been debated from running out of gas, to loss of control after sudden engine failure due to nose-heaviness, to taxiing down the lagoon and getting the pontoons caught on a submerged sandbar.

A black fog descended on Alaska and spread to the rest of America as the bodies were flown back to the Lower 48.

Irish-born American tenor John McCormack expressed the mood of the country – and much of the world – when he said: “A smile has disappeared from the lips of America and her eyes are suffused with tears.”

This column features tidbits found among the writings of the late Alaska historian, Phyllis Downing Carlson. Her niece, Laurel Downing Bill, is turning many of Carlson’s stories into a series of books titled “Aunt Phil’s Trunk.” Volumes 1-4 are available at bookstores and gift shops throughout Alaska, as well as online at http://www.auntphilstrunk.com.