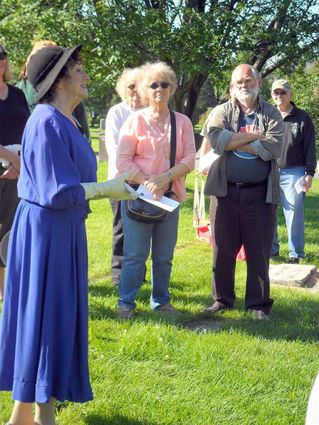 Attendees listen as Audrey Kelly, left, performs the role of Mae Beaton during a “Stories of the Cemetery” event at the Anchorage Memorial Park Cemetery in July. Audrey and her husband Bruce Kelly are organizing the events in collaboration with Linda Benson and cemetery director Bob Jones. Live actors perform the part of historic Alaskans now buried in the cemetery. The event will take place again on Aug. 11.

History will come to life at the Anchorage Memorial Park Cemetery on Sunday, Aug. 11, when the “Stories of the Cemetery” returns, featuring costumed actors telling the true stories of people who are buried in the cemetery.

The philosophy of these programs is to offer a greater awareness of Anchorage’s rich history. In addition, the presentations are carefully prepared with the intent to honor and respect the people whose stories are being told. The actors’ monologues are based on public records or known facts. They are compiled through research in newspapers, books, public records and, where possible, conversations with surviving family members.

The event is a collaboration between Bruce and Audrey Kelly, who research the subjects and portray two of the characters; Linda Benson, who is the theatrical director and also an actor; and Rob Jones, Memorial Park Cemetery director.

Although the Kellys believe that ‘everyone at our cemetery has a story to tell,’ this is a volunteer project for them and for Linda Benson. Actors who match the personality of the characters are recruited and they work for free. There is no entrance fee, but donations for the actors are appreciated.

The program begins at 6 p.m. and will be presented in one location. At a similar program in July, the monologues were performed several times at individual gravesites over a two hour period. Audience members walked throughout the cemetery choosing the performances and the order in which they wished to hear them. While the same stories as those presented in July will be in the August 11 program, the use of one location is planned, for the convenience of visitors with limited ability to move throughout the cemetery grounds. Audience members may bring their own chairs.

The stories are rich in information about life in Alaska and the names of many well-known people are woven throughout – even in situations where the name of the dead is not necessarily known to more than a few. Here are some of them:

A.B. Cummings played by Mark Robokoff. Cummings came to Alaska in 1916 and was asked by President Wilson to manage the McKinley Park Hotel, which was run by the Alaska Railroad, at that time owned by the federal government.

Nearly 20 years later, he bought an interest in the Anchorage Hotel. Anchorage had grown and the idea of expanding it was very appealing. Gold enters into this story – as it does in many others – with the rumor that there might be gold on the property.

Martha White played by Linda Benson. Martha White’s first marriage ended in divorce in the 1880s. By 1892 she and her second husband had moved to Gray’s Harbor, Wash., where she gained public attention by saving the lives of three men from a ship wreck. In 1894 she and her family moved to the west side of Cook Inlet where her daughter was the first white child born there. After the death of her second husband she moved to Anchorage and opened a restaurant and lodging house. By 1915 her reputation was such that she was invited to play a role in ceremonial creation of the railroad.

Pickney McMahill played by Dick Reichman. The recruiter in Illinois said McMahill was too young to sign up for the Civil War. He didn’t have that problem in Kansas and joined under the command of a Captain Anthony, the brother of a woman named Susan, who he heard speak about women’s suffrage. McMahill was another person lured west by gold fever – 1872 in California and 1903 in Nome. Although he never struck gold, by all accounts he had a good life and is the only Civil War veteran buried in the cemetery.

Otto Mikkola played by Ron Holmstrom. Mikkola’s story is that of a coal mine disaster near Sutton. Jobs were hard to find in 1937 and everyone knew it was dangerous work. His grave is surrounded by those of his co-workers who came from places like Finland, Czechoslovakia, Italy, Norway and Russia.

Helen Malcolm played by Rachel Gregory. Helen Malcolm was born in 1900 in Unalaska and died in 1988. Her mother was Aleut and her father a seaman from Sweden. She describes eloquently the rigors of growing up in the Jesse Lee Home, where she learned to wash, iron, clean, mend and do needle work. Men seeking wives visited the home and Malcom met her first husband that way. 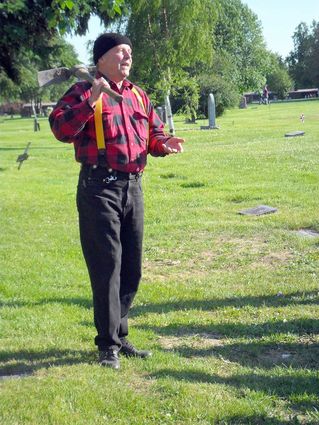 Ron Ohlstrom performs as Otto Mikkola, who died with many others in a coal mine explosion near Sutton in 1937. Mikkola reportedly died in a mine shaft within feet of safety.

One of Malcolm’s grandsons, old enough to have known his grandmother well, attended the July presentation with other members of the family and praised Gregory for her performance as well as asked her for other information found in researching the script.

Mrs. John (Mae) Beaton played by Audrey Kelly. Mae Beaton was the second wife of John Beaton who, in 1900, discovered the widest gold placer streak in America, which was named the Iditarod. In 1918 his first wife and two children had sailed from Skagway on the Princess Sophia to visit family. During a bad storm, the ship hit Vanderbilt Reef and the seas were too rough for small boats from Juneau to reach it; 353 died, including numerous people who were well known in the Territory. The tragedy of the Princess Sophia was etched in the minds of Alaskans for many years.