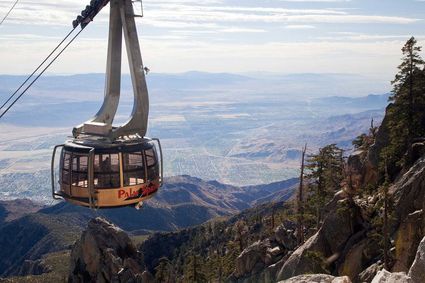 More than 17 million people have traveled the 10-minute, 2.5 mile ride on the Palm Springs Aerial Tramway, which celebrates its 50th anniversary this year.

Quick Quiz: Where is Sachsenhausen and what is Apple Wine?

Well, to start with, as you probably guessed  Sachsenhausen  is in Germany. And, as you also may have opined, apple wine is wine made from apples instead of grapes. In the Rhine-Main region, vintners have been producing apple wine from local apples for over 250 years.

A bit of history:

During the Middle Ages, beer and wine were the beverages of choice. Then, in the middle of the 16th century, the Rhine-Main area went through a bit of climatic change which negatively influenced wine production from then on. As a result, many vineyards were transformed into fruit orchards and during the Goethe era more and more grape wine taverns became apple wine pubs.

The good news is, some owners of traditional restaurants in Sachsenhausen continue to make and serve their own apple wine to this day. At Frankfurt’s many taverns and apple wine pubs, gourmets like to enjoy their apple wine together with typical local food fare such as frankfurters, loin ribs with sauerkraut and Goethe’s favorite, the popular “green sauce”.

I’ve been to Germany in years past and enjoyed every wandering and every beer-sampling minute of it. But in the process I missed even hearing about apple wine. According to a dispatch I received recently, few if any regions outside of greater Frankfurt even have old-style apple wine on their beverage lists. If I get back it looks to me I’ll have to at least briefly visit Sachsenhausen and expand my sipping horizons.

A favorite tram is half a century old

Regular readers of this column may recall that, several times, I’ve said I’ve never met a tram ride I didn’t like. I’ve sampled cable-car rides on at least three continents and at least two of them contend for first place in my “great to greatest” ranking system.

Happily, one of the two is the Mt. Roberts Tram here in Juneau. I can sample a truly commanding panoramic view from the upper 1,800- foot level above the capital city any summer day and hike a number of rewarding trails even higher. The upper-terminal restaurant, bar, museum, movie theater and shops are likewise impressive.

The other “most favorite” contender in my tramway ratings is the Palm Springs Aerial Tramway on the outskirts of Palm Springs, Calif. Since 1963 more than 17 million people have traveled the 10-minute, 2.5-mile ride, which begins at the Valley Station, elevation 2,643 feet, and ends at the Mountain Station, elevation 8,516 feet. The view from the upper terminal level is truly awesome. And the wooded trails are among the most rewarding I’ve ever hiked and cherished.

In September 2013 the Palm Springs Aerial Tramway will celebrate what sponsors call “50 years of WOW!” with promotions, special giveaways and a party that will rival its grand inaugural half a century ago.

Actually, the Palm Springs Aerial Tramway almost didn’t happen. The “father” of today’s Tramway, Francis Crocker, first dreamed of riding to the upper levels of Mount San Jacinto, 10,834 feet high, in 1935. Twice a tramway enabling bill passed the California State Legislature, only to be vetoed. With the outbreak of World War II, the plans were shelved.

In 1945 Governor Earl Warren signed the measure creating the Mount San Jacinto Winter Park Authority and by 1950, technicians were moving ahead on designs for the tramway.

But then the Korean War caused another delay.

Finally the ambitious project began to take form in July 1961. Construction of the Tramway was an engineering challenge and was soon labeled the “eighth wonder of the world.” Francis Crocker’s dream was at long last completed in 1963. “And the rest,” as they say, “is history”. The inaugural ride occurred on September 12 of that year with local and state dignitaries and celebrities on hand.

Crocker rode the Tramway numerous times and fellow passengers often would receive a narration from him as they rode up to “where it was nice and cool” at the wonderfully wooded upper level trails and viewpoints. Francis Crocker died in 1992.

And speaking of aerial things to do...

Here’s the lowdown about another first-rate aerial operation (a zipline, not a tram). I haven’t yet sampled this one but I’ve heard nothing but glowing reports about it. When (and if) I do zip it myself I suspect I’ll rate it as favorably as the Juneau and Palm Springs tramway adventures above.

This particular adventure is staged at the Icy Strait Point resort near Hoonah. It’s accessible in summer from Juneau by air and water. It’s a one-of-a-kind single-span cable ride that zooms downhill at speeds of 65 miles and hour from high on the side of a mountain. Landing comes at the shoreline edge of the mountain.

It’s one of many first rate Icy Strait Point adventures and sightseeing excursions (plus shops, museum and dining experiences). 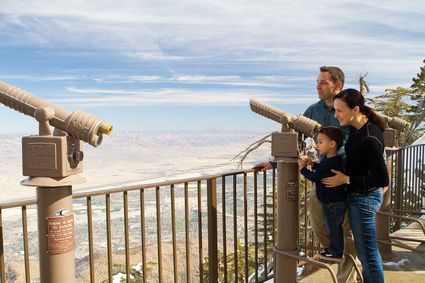 The view from the Palm Springs Tranway's upper terminal is spectacular.

On August 24 the Icy Strait operators will lay out the welcome mat for this year’s annual Neighbors Day experience for Alaskans. Round trip catamaran transportation from Juneau’s Auke Bay/Statter Harbor will be provided to the Icy Strait site departing at 7:30 a.m. The return trip will depart at 3:30 p.m. Cost is $119.95, for round trip, or $149.95 for round trip plus Ziprider experience.

All other tours are priced between $20 to $40. These experiences include bike rides, ATV tours, kayaking, whale watching, tram, tribal dance, and more.

For more information about the catamaran trip view https://shop.icystraitpoint.com/Juneau.html or call 523-3680.

Mike Miller lives in Juneau and reports on Alaska and worldwide travel and publishes a website, http://www.alaskacruisingreport.com.