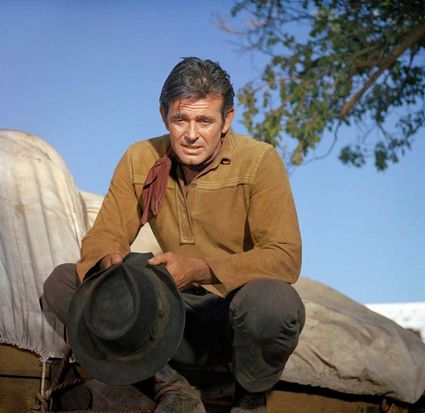 Stuart Whitman in a publicity still for “Rio Conchos” in 1964.

You won’t see Stuart Whitman’s name listed in the closing credits for the 1951 sci-fi classic, “The Day the Earth Stood Still.” But he’s there, if only for a few seconds, in an uncredited role as one of the sentries guarding the alien spaceship.

Such was the humble beginning of many young actors in the 50s, appearing anonymously in bit parts hoping ultimately to be “discovered.” It took about a decade, but critics and audiences eventually noticed the handsome, dark-haired Whitman.

While waiting for that big break, young Stuart bought and hired out a bulldozer, to help pay the bills. But it wasn’t an entirely odd employment choice.

“My dad was a real estate developer, and I helped him out before I was put under contract with Universal Studios,” he told me during a June interview.

His patience and perseverance paid off with a Best Actor Oscar nomination for his performance in the 1961 film, “The Mark.” Shot in Ireland with co-star Rod Steiger, it was a controversial film for the time, with Whitman playing a recovering sex offender.

“I didn’t see the script until I got to my hotel room in London,” he said. “My first thoughts were ‘I can’t do this’ and tried to think of an excuse to get out of it. Later, I got a call from Steiger who wanted to meet and rehearse at his place. We worked our way through and it turned out fine.”

After the film’s release he says coworkers told him, “Stuart, you’re going to get an Oscar, or at least nominated.” They were partly correct. “I was living in North Hollywood and heard the nomination on the radio while driving. I was shocked and almost crashed the car!”

But he didn’t win. Quite likely, the film’s sensitive theme turned off some Academy voters. He was also up against stiff competition that year including Spencer Tracy, Paul Newman and Charles Boyer. The award went to Maximilian Schell in “Judgment at Nuremberg.”

Ironically, Schell’s sister, Maria, was Whitman’s co-star in “The Mark.”

“Maria told me she didn’t know who to vote for that year!” he recalled.

Whitman’s charm and charisma made him a natural for western roles including the short-lived but popular TV series “The Cimarron Strip” in 1967, and films such as “The Comancheros,” co-starring with John Wayne in 1961.

“Director Michael Curtiz wanted me for the part of Paul Regret in the film, but said it had already been cast. He suggested I go talk to Wayne,” said Whitman. “I found him on the Paramount lot coming out of his trailer. I’d never met him before, but walked right up to him and spent 20 minutes pitching for the part. Finally he said ‘Okay kid, you’ve got it.’ That’s the kind of power John Wayne had. Duke loved to play chess between scenes and we had many games. His strategy was strange because he would give up major pieces just to save his pawns!”

Whitman’s most well-known film is probably “Those Magnificent Men in Their Flying Machines” in 1965. “That was the first big money I made in a movie – $300,000,” he said. 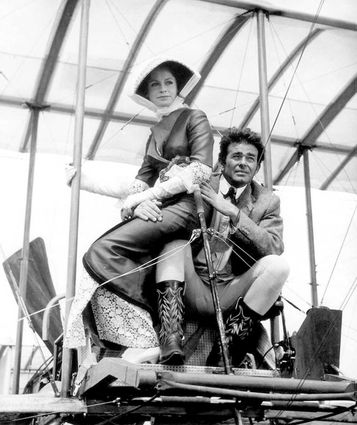 Stuart Whitman and Sarah Miles in “Those Magnificent Men in Their Flying Machines” (1965). “That was the first big money I made in a movie, $300,000,” Whitman said.

Money, however, was never an issue for much of his later career. From his humble bulldozing beginnings, Whitman went on to make millions from real estate investments.

“I didn’t need to act to make a living, but had a real passion for it – I just loved to act.”

After some 200 film and TV roles, Whitman, now 85, retired to his 30-acre ranch in Santa Barbara. “I’ve lived there for 45 years, in between the mountains and the ocean. It’s a beautiful spot.”

In 2006, he married his third wife, Julia, a Russian. The two met when Whitman traveled to St. Petersburg to be best man at a friends’ wedding.

“After returning to the US, I got a phone call from her saying she was in Pasadena and could we meet. I’m sure glad I said ‘absolutely!’”

Nick Thomas’ features and columns have appeared in more than 320 magazines and newspapers. He can be reached at his blog: http://getnickt.blogspot.com