By Ron Travis
For Senior Voice 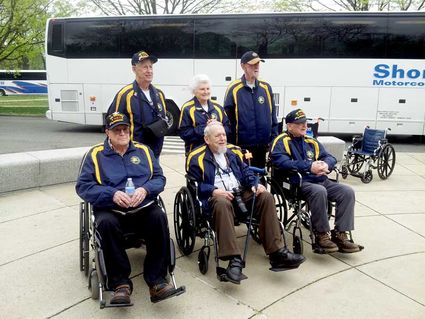 The Last Frontier Honor Flight, a newly formed hub of the Honor Flight Network, is now looking for World War II, Territorial Guard and Korean War Vets to sign up for a sponsored trip to Washington D.C. to visit the memorials that were built in their honor. We are concentrating on WWII vets and Territorial Guard first for obvious reasons – their advanced age is working against them and we feel the sense of urgency to get them back to D.C. For many, this may be their last mission.

I heard about this program from my mother who was in a retirement home in Washington state. Her neighbor, a World War II vet, had just returned from an Honor Flight out of Spokane. I was visiting her and he joined our conversation and all he could talk about was the Honor Flight and what it had meant to him and his fellow World War II vets.

This piqued my interest and decided when I returned to Alaska I would find the local Honor Flight Hub and see if we could help. We found that there wasn’t a hub in Alaska (at this time Honor Flight Golden Heart is operating out of Fairbanks, under the guidance of Julie Enger). So we called the Honor flight network and were instructed to look over the paper work and fill it out and join the other 120 hubs all over the U.S.

We were told that if we decided to start a hub our life would never be the same. Well, we started the hub and our life has changed. My wife and I, Greg and Terry Archibald from Big Lake, and Wasilla’s Dede Robb and Gloria Garratt signed the paperwork and things have never been the same. Lynda and I went on our first training run in April of this year. We took six Alaskans, two from Fairbanks, two from Anchorage, one was a lady who was 96 years old, the oldest female veteran in the state, and two from the Kenai Peninsula.

Julie Enger from Fairbanks organized the flight and we joined with a group from Southern Oregon in Portland, to round out the flight of 52 people. We had 25 vets, 25 guardians (each vet has a guardian with them to make sure their needs are attended to and they are safe).

What a whirlwind trip. The plane was three hours late getting into Reagan International, but there was still a huge crowd waiting to greet the plane. The Air Force Band was playing, people were lined up on both sides shaking the vets’ hands and hugging them, thanking them for their service. It was a hero’s welcome.

The next day we visited the World War II Memorial, Korean War, Vietnam, and Lincoln memorials, the Iwo Jima Memorial, and the Arlington Cemetery for the changing of the guard at the tomb of the Unknown Soldier.

At each memorial we visited, the vets were surrounded by school children and people wanting pictures with them. It was a flood of emotions, some unexpected. The family members that were traveling with the vets said they heard stories they had never heard before.

The next day we toured the Air Force Memorial, the Women’s Museum, Smithsonian National Air and Space Museum, and then on to the airport for the return.

We overnighted in Portland and returned to Anchorage the next day. The travelers were tired but all said they were glad they went and it was a very meaningful and humbling experience. 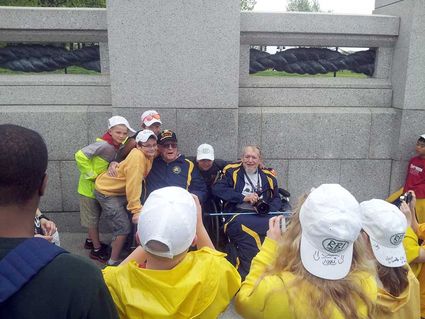 Other visitors at the World War II Monument gather to have their photos taken with Alaska veterans Dale Trombly and William McBride.

Our next flight is planned for October 22. We have 25 veterans who are willing and able to make the trip. The oldest is 94 and youngest is 87. At least four of the veterans are from Metlakatla, a couple of whom were Alaska Territorial Guards.

Our plan is to continue to fly our heroes as long as we can. We will be adding Korean War veterans as we need to round out the flights, and eventually want to transition to Vietnam vets. If a veteran from any war has a terminal condition we will move them up and fly them as soon as we can.

We also need guardians to go along and assist on the trip, and welcome volunteers.