Not an obvious travel destination, but a good one 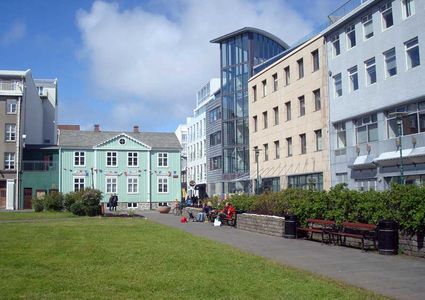 “I don’t know what to do to celebrate your [70th] birthday!” my husband lamented. “I know you don’t want a party or jewelry, but I can’t decide what to do for you.”

“I’m going to Scotland by way of Iceland!” my friend said exuberantly. “Why don’t you come with me?”

And so it was that I found myself on Icelandic Air to Reykjavik one balmy night in July with my friend Sloane, an artist and former helicopter pilot who had been there in the 1960s when the airline had one prop plane and a dicey landing field.

We arrived at Iceland’s slightly less than bustling international airport in Keflavik, about half an hour from the capital city, at midnight. Exhausted and hungry (Icelandic Air didn’t serve meals on the five-hour flight from Boston), we were disappointed not to find our B’n’B greeters waiting for us as promised.

When the two surly teenagers finally showed up their greeting was almost as chilly as the night air that took our breath away as we exited the airport. The trudge to the van was long and we were tired. “You are 18!” I finally seethed through shivering teeth. “My friend is nearly 81. Take her bag!” They did, while I was left to drag my own, chalking it up with a certain amount of pleasure in not looking my age.

Iceland, it turns out, can seem like a hostile place sometimes.

“It comes from our pioneering culture,” my friend and former student, Anna, with whom I was staying in Reykjavik, explained apologetically. “We don’t even have a word for ‘please.’ The literal translation of ‘Please pass the butter is: Can you be bothered to pass the butter?’”

That can-do-so-you-do-it-too spirit explained a lot as my visit progressed and I realized that a great many Icelandic people live in isolated farmhouses fending for themselves on an island often wet, windy, dark and cold. (There are actually more of Iceland’s special horses than people.)

Still, the landscape is stunning in all manner of weather and a three- or four-day layover en route to Europe should not be discounted.

For people (like me) who have been to Scotland or New Zealand, done whale-watching, trekked across a glacier, and have no desire to swim in frigid waters or rappel off an ice mountain, four days in Iceland is plenty. On the other hand, if you’re into hiking, biking or winter sports, the Scandinavian country that belonged to Denmark until WWII could be a destination unto itself.

Among the high points of a short visit is the famed Golden Circle, a 300 km. World Heritage Site encompassing much of Iceland’s history and extraordinary topography. Looping from the capital city into central Iceland and back there are three main sites: Pingvellir, where Iceland’s first parliament was situated, the Gullfoss Waterfall, often said to be more spectacular than Niagara although the drop is not as deep, and the geothermally active valley of Haukadalur, home to several geysers. But perhaps the most spectacular site on this route is the rocky, waterfall-dotted scenery showcasing the Continental Shift at its most visible on earth.

Another place to experience is the famous Blue Lagoon, Iceland’s most famous attraction. Close to Reykjavik it boasts a pool of superheated neon blue water known for its restorative effects, although most of its annual 400,000 visitors probably go there because they’ve been told not to miss it. Unlike the naturally occurring hot spring pools that Iceland is known for, the hot water in the Blue Lagoon comes from a nearby geothermal power plant used to create electricity for the capital city. A full service spa in a setting of lava rock and aqua water, the hotel, restaurant and bar all offer views of the Lagoon, making it a great overnight excursion, if you can afford the hefty tab.

Reykjavik itself is worth a day’s wandering. Small for a capital city, it hosts several good to excellent restaurants (although one of its most enticing meals is a hot dog “all on” from the street vendor that anyone in town can direct you to), a few nice museums, a lot of shops for handmade woolens (at a price) on the walking street, a huge monolith of an arts center, a strangely phallic central church, and a five-star hotel where you can end up for happy hour when you’ve had enough hustle and bustle.

Any excursion into the island and its coastlines provides spectacular scenery. Anna and I drove to the Snaefellsnes peninsula for an overnight visit with her friends and despite the worst summer weather Iceland has experienced in 15 years the landscape was amazing. 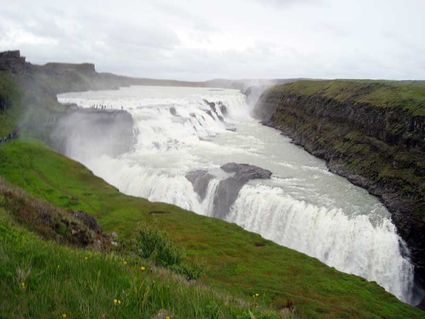 One of Iceland’s most popular attractions, the Gullfoss Waterfall is often said to be more spectacular than Niagara although the drop is not as deep.

From the random ribbons of water cascading down mountainsides to views of the glacier that marks that region to the huge white seal we saw basking on a beach, there was always something wonderful to see no matter which way the car pointed.

And while the fishing village where we spent the night was not as pretty as I might have hoped, the local lamb we ate for dinner more than made up for it.

At the end of the week, leaving Sloane happily researching her ancestral home in Scotland, I boarded the flight back to Boston glad to have visited a country I’d never seen before, even if I did need woolies and a windbreaker the whole time I was there. Grateful for Anna’s hospitality, and for the beauty of a northern island I’d flown over many times, always hoping that one day I’d see what I perceived as a mysterious place, I had to admit it was the best birthday present my husband had ever been bothered to give me.