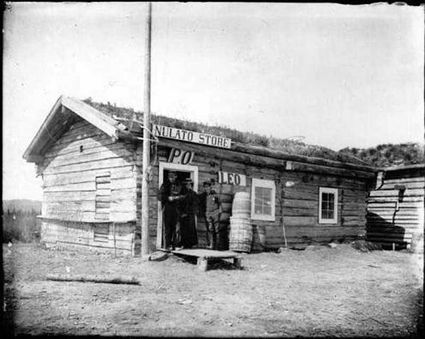 Former editor of the Tombstone Epitaph John Clum rode down the Yukon River in the late 1890s establishing post offices along the way, like this one at Nulato.

John Clum, the colorful editor of the widely known “Tombstone Epitaph,” made his mark on Alaska in the late 1890s. He was appointed post office inspector for the territory in March 1898. He and his son, Woodworth, traveled 8,000 miles around Alaska and the Yukon setting up new post offices and equipping others.

It was no job for a weakling – one of his inspection trips was made on “foot and in a snowstorm” to Chilkat, and a second trip, according to his diary, was via reindeer and “lap” sled. This was during the Klondike stampede days and thousands of gold seekers were flooding the country. They wanted mail service and Clum gave it to them as rapidly as possible.

Then he started down the Yukon. Equipped with a 100-pound, 18-foot Peterborough canoe, he carried about 1,000 pounds of supplies that included mail sack keys, stamps, postal cards, and dating and canceling stamps. He found prices steep everywhere, he wrote in his diary. A bowl of soup at a restaurant cost $1, as did a one-minute dance with a dance hall girl. Eggs were $18 a dozen, sugar $100 a sack.

Over the Yukon Trail, Clum and his son traveled to Dawson, which Clum noted was “the Coney Island of the Northwest … wild and wooly … streets filled with surging masses from 9 a.m. until 2 a.m.”

On July 1, 1898, he and his son boarded the steamer Seattle No. 1 for its maiden voyage down the Yukon to St. Michael, stopping off to establish post offices at Fort Yukon, Rampart, Weare, Koyukuk, Nulato and Anvik. The boat reached St. Michael on the evening of July 9, and Clum sent 1,000 pounds of mail, the first to go back up the Yukon, on the steamer Bella.

He then took a ship to the Aleutians, changed the name of the post office at “Ounalaska” to “Unalaska,” then voyaged into Cook Inlet and set up post offices at Tyonek, Sunrise, Homer and Seldovia.

The postal system he developed put Alaska in touch with the United States, and when the Nome stampede occurred, Clum became a special agent in Alaska for the Post Office Department.

Clum successfully fulfilled his duties as the “Post Office man in Alaska.” He resigned in 1909 and left Alaska. His daughter, Caro, after whom the settlement of Caro was named, stayed on, marrying Peter Vachon, owner of the Tanana Commercial Company.

This column features tidbits found among the writings of the late Alaska historian, Phyllis Downing Carlson. Her niece, Laurel Downing Bill, is turning many of Carlson’s stories into a series of books, available at bookstores and gift shops throughout Alaska, as well as online at http://www.auntphilstrunk.com.