Marvin Kaplan's voice was as well-known as his face 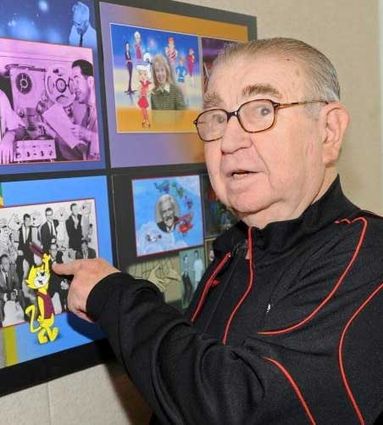 Actor Marvin Kaplan, who turns 87 in January, points out memorabilia from the 1960s series "Top Cat," in which he played the voice of "Choo-Choo."

Half a century ago, the country was embroiled in civil rights conflicts, a war in Asia and mourning the loss of a president. When released in the midst of this social turmoil in 1963, Stanley Kubrick's "It's a Mad, Mad, Mad, Mad World," must have seemed appropriately titled. In reality, the film was an epic comedy featuring one of the greatest casts of comedians ever assembled on film.

"There was a pall on the whole country and not a lot to laugh about," recalled Marvin Kaplan, who appeared in the movie's memorable gas station sequence. "With stars like Mickey Rooney, Milton Berle, Jonathan Winters, Sid Caesar, Phil Silvers, Buddy Hackett and Spencer Tracy, the film soon became a comedy classic."

In the gas station scene, Marvin is paired with Arnold Stang. Their characters, Irwin and Ray, attempt to subdue a highly agitated Jonathan Winters whose character is competing in the mad race to locate buried money. When Winters erupts in anger, he reduces the building to rubble.

"Unfortunately, the gas station was destroyed before all the close-up scenes were filmed," Marvin recalled. "It had to be rebuilt overnight – a mistake that cost $100,000!"

The film, which took two years to make and was shot in thirty California locations, had its world premiere at the new Cinerama Dome in Hollywood, which was completed just days before the movie's first showing.

While filming his scenes, Marvin was pleased to share quarters with Winters, who had one of the few air-conditioned trailers on the set – a blessing in the 107 degree California desert. He also recalls experiencing firsthand Winters' brilliance at improvisation and mastery of madcap mimicry and mime.

"We would play a game in the trailer called 'Who are you today, Jonathan?' He would go on for 45 minutes making up characters while we waited to shoot the next scene. I've worked with two comedy geniuses in my life and one was Jonathan Winters."

The other was Charlie Chaplin.

In 1948, a youthful Marvin Kaplan was stage manager for a play called "Rain" at the Circle Theater in Los Angeles. Chaplin was the director.

"He was so graceful and walked like a ballet dancer. One time he did a handstand on a table – he was around 60 at the time! And during the shows, he couldn't sit in the audience and watch because he was too hyper. So he'd walk around the theater with a handkerchief in his mouth, but all the audience was watching him."

Kaplan also recalls performing one Christmas in a play, "Aladdin and the Wonderful Lamp," with Chaplin in the audience.

"I was in dark Egyptian makeup with my glasses removed. During the show I was supposed to hold up cards, but couldn't see a thing, so they were all the wrong way. It was really messed up. Chaplin came backstage after the performance to see the cast and Sydney, his son who was in the show. We asked him how he liked it: 'Sydney was good,' he said. 'The monkey was good, too. But that nearsighted Nubian slave really cracked me up.' It was one the greatest compliments I ever got."

Since the 1950s, Marvin has appeared in numerous films and TV shows, and was a regular cast member on the 80s sitcom, "Alice." With his distinctive Brooklyn-flavored accent, he also worked as a voice actor, notably in the popular "Top Cat" cartoon from the early 1960s where he voiced Choo-Choo.

"People tell me all the time they named their cat Choo-Choo after that character."

In recent years, Marvin, who turns 87 in January, has concentrated on writing and producing, including the plays "A Good House for a Killing" and "Bluebeard's Eighth Wife" (see http://www.marvinkaplan.com) and is especially interested in working with veteran actors.

"I also executive produced and wrote the screenplay for 'Watch out for Slick,' which was in nine film festivals and won several awards," said Marvin. "The average age of the cast was 70 and one was 98 at the time. It's a myth that actors over a certain age can't memorize lines. We did one-takes mostly, and they came prepared and on time – none of the nonsense or tantrums we see from some young stars today."

In addition to writing and producing, Marvin still acts.

"The great thing about growing old is that I can do whatever projects I want. I have to keep busy."

Nick Thomas has written features and columns for over 330 magazines and newspapers and is author of "Raised by the Stars," published by McFarland. He can be reached at his blog: http://getnickt.blogspot.com.