Saint Elias: tough every foot of the way 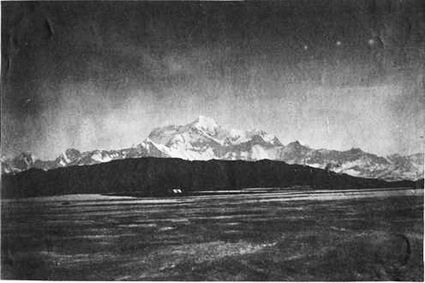 View of Mount Saint Elias taken in 1897 by George R. Putnam, who worked for the U.S. Coast and Geodetic Survey.

Mount Saint Elias, the first point sighted by white man on the mainland of Alaska in 1741, has proved a mighty challenge to mountaineers. The second highest peak in the United States, behind Mount McKinley, and the fourth highest peak in North America, it is 18,008 feet high. Situated on the Yukon and Alaska border, only a handful of climbers have conquered it in the 261 years since Vitus Bering discovered and named it.

The mountain's name in Tlingit is Yaas'éit'aa Shaa, which means "mountain behind Icy Bay," although it is sometimes called Shaa Tléin (Big Mountain) by the Tlingit people of Yakutat.

Nearly a century and a-half went by after Bering's discovery before any attempt was made to ascend the vast, barren mountain. Supported by the New York Times, Frederick Schwatka, William Libbey and H.W. Seton-Karr accepted the challenge in 1886. But the expedition was doomed to failure, since so little was known of the conditions that would be encountered, such as wind, snow and low visibility. The group made it 20 miles inland and had to return to camp.

Two years later, a party of three Englishmen and one American, William Williams, found their way to the summit blocked by a 1,500-foot high mound of ice at the 11,400-foot level. They concluded the southwestern face of Mount Saint Elias would never be climbed.

I.C. Russell and Mark B. Karr attempted to summit in 1890. They might have been successful, but a severe storm forced them to retreat after a four-day wait in crude shelters, in snow banks, without fuel and almost without food.

In 1897 the mountain finally was conquered by one of the world's most distinguished mountain climbers and explorers, the Italian Duke of Abruzzi. Prince Luigi followed the route that Russell had pioneered in a second attempt in 1891.

The party landed at Yakutat Bay and made their way across the 40 miles of snow and ice between the coast and the base of the mountain. Crossing the Malaspina, Seward and Agassiz glaciers, the Duke's party ascended the heavily crevassed Newton Glacier and climbed to Russell Col at the end of the northeast ridge. From the Col, at about 12,300 feet, the party made the long ascent to the summit in a single day, July 31, five weeks after leaving tidewater, and without any technical difficulty.

The first American party to conquer the "Saint," the Harvard Mountaineering Club, included a woman, Betty Kauffman. When she reached the summit in 1946, she had climbed higher than any other woman up to that time in Alaska and Canada

Today, Mount Saint Elias remains desolate and icebound, a challenge to the explorer and mountaineer, and a vast field laboratory for the student of glaciers.