A passion for teaching and sharing 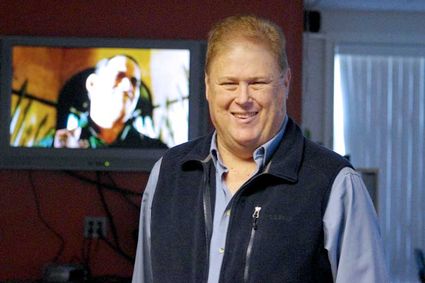 Ron Crawford selected "The Addams Family" movie for his featured film showing at the Chugiak-Eagle River Center on Oct. 21. He has been hosting the center's 'movie night' as a volunteer since he retired from full-time teaching at UAA in 2002.

Each month the residents of the Chugiak-Eagle River Senior Center have a date with Ron Crawford. It's a date complete with popcorn and a movie, often one which touches the heart, raises spirits and "sets your toes a tapping."

Crawford's reputation as a movie buff is longstanding and well earned. A former professor at University of Alaska Anchorage who taught both history and geography, his knowledge of movies is encyclopedic and retirement has allowed him to indulge his passions more.

His devotion to movies started at a young age, he says.

"My father worked at a movie theater in San Diego, California, when I was young. Since my mom worked at an ice cream parlor close by, the back rows of the theater were my babysitter."

While he thought about a career in movies for himself, Crawford says he didn't think he had the talent, skills or patience it requires.

Crawford started showing movies at the senior center when he retired in 2002, saying that it was part of his desire to keep busy, to do things that are useful, and it was convenient because he lives nearby. Knowing that the center loves volunteers, he offered to bring in films once a month, and keeps that promise faithfully.

"I pick movies for their entertainment value and usually go with lighter and more uplifting stuff. The seniors are particularly fond of musicals and animation," he syas.

One recent offering was "Calamity Jane," with Doris Day and Howard Keel. The special effects are laughable in comparison to what's on the screen today. And it's hard to imagine how Hollywood movie moguls could have sanctioned the stereotypical treatment of Indians chasing the stagecoach. But the story of a clever tomboy cowgirl from the old west, determined to see that folks in Deadwood behave fairly and honestly toward each other, all the while singing and dancing up a storm, reminds one that fine singing and demanding choreography still offer a lot of entertainment. As does a happy ending.

Sharron Butler, day service coordinator at the center, says the clients really look forward to movie day and Ron is good at choosing movies that draw a large audience, and at finding the movies which are requested.

Crawford also keeps active in retirement by helping the National Park Service with informational talks about volcanoes and the aurora. He also teaches courses for "OLE" – Opportunities for Lifelong Education – which offers classes in many topics for learners over age 50.

Personal travel and volunteer activities support his passion, he says. "I love teaching and interacting with people."

He says he watches two or three movies a week. A film history course he still teaches as a UAA adjunct professor has featured the movies of Alfred Hitchcock one semester and Stephen Spielberg the next. On modern movies, Crawford says, "my biggest problem is how dumb most of them are. Sequels drive me crazy. I like movies that draw me in with a good story and great characters and let me escape into their world. I'm not a fan of shoot-em-up action pictures with lots of violence. I love films that show imagination."

"A common theme I use in my classes is that movies are a reflection of our times. This makes them really useful to teach about decades in American history, be it the Depression or World War II. The best thing to look for is when a movie assumes some intelligence in a viewer. Often watching ads and previews tells you a lot about a movie."

These comments are equally applicable to his opinion of "Alaska" movies.

"I've seen few movies that offer much to enhance the image of Alaska. Most Alaska-based movies just end up enforcing clichés about the state. My favorite Alaska film is "Never Cry Wolf," which Disney released in the 1980s."

Although ratings can serve a purpose, he thinks they've recently become silly.

"I saw that 'The Wizard of Oz' was given a PG rating because of the witches' flying monkeys. I've also seen a PG rating for 'Casablanca' because someone was smoking."

He numbers his personal movie collection in the hundreds and says it is a mix of old and new.

"I love classics and I love the technical improvements they get on DVD and Bluray."

Many senior centers offer regular movie showings. While there is some equipment required, Crawford suggests that any center which wants to include such an activity recruit for a volunteer who loves movies. It might be difficult to find someone who loves movies as much as Crawford, but there are many people with DVD collections who might enjoy sharing.