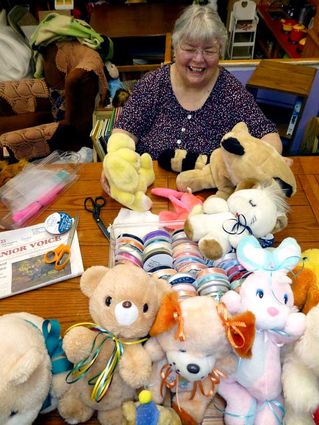 Jean "Nana" Sether cleaned and repaired three bags of gifted teddy bears, which she plans to donate to local children.

Jean "Nana" Sether still thinks about her kids, her nuggets. For over 16 years, Nana was a daycare worker in Seward and owned Nana's Nuggets Daycare a good part of that time.

In 2007, she retired to Eagles View in Cooper Landing's independent senior housing complex off of Snug Harbor Road. Since living here, Nana has organized and hosted annual Halloween parties for local children. And she doesn't miss an opportunity to jump on the senior bus and join in the fun at Cooper Landing School events.

Visited fairly often by former nuggets, Nana recently reconnected with Kelsey Jones through Kelsey's father. A new bride now living in Colorado, Kelsey came home to Seward and cleaned her old bedroom. As a result, Nana was gifted with three bags of teddy bears loved by Kelsey as a youngster but now unable to make the move with her.

Nana immediately thought of the local Cooper Landing Emergency Services, the Alaska State Troopers, and the school children and knew she could find homes for these old treasures. Many items contributed to Cooper Landing Senior Citizen Corp. Inc. find their way from the storage room, constantly organized by Nana, to children through such venues as the Christmas Santa Store Nana hosts in Eagles View Commons.

When I visited Nana a few days ago, she was rehabilitating the bears. After being laundered, she was brushing and combing them and tying pretty ribbons on the soft and spotless animals. All of the bears will be donated, with a number of them being distributed by Santa Claus at the annual school Christmas party.

Nana's friends, Sue Betlej and Mayme Ohnemus, watched while Nana worked on the bears. As Sue said, "You never know what Nana is going to do next!"

But you can be pretty sure whatever she does will involve children.