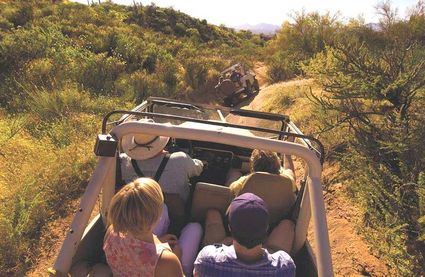 A choice of alternatives awaits visitors interested in exploring Scottsdale's other-worldly setting. On land, they include hiking, biking, horseback rides and off-road driving tours. Those who prefer to take to the air may choose a hot-air balloon ride or clamber aboard an airplane, helicopter or even a seaplane for a flight that includes a lake landing.

Women wearing the latest fashions strolled into Gucci and Neiman Marcus intent on adding to their chic wardrobe. Not far away, my wife Fyllis, wearing blue jeans and boots, was learning to lasso cattle. My afternoon was spent exploring a rugged wilderness of giant cactus and towering mesas.

The first impression of Scottsdale, Arizona, is the diversity of attractions. The shopping alone provides an introduction to the something-for-everyone variety. Along with top-of-the-line stores are shops selling cowboy hats, boots and everything that's worn between them.

The cowboy influence also lives at the Arizona Cowboy College, where Fyllis experienced a taste of life on the range. Most city slickers undergo a two-day orientation course followed by four days rounding up cows, branding and doing other cowboy-like chores.

The one-day introduction which Fyllis had included learning to clean hooves, and groom and saddle Billie, the horse which she was assigned. Then came instruction in riding Western style, including suggestions like "Lighten up on the reins" and "Sink your butt into the saddle." Later she had a lesson in roping a metal mini-cow on wheels which, after several errant tosses, my newly westernized wife was able to ring.

The cowgirl experience ended with a ride in the Sonoran Desert. While descriptions of deserts usually include words like bleak and drab, we learned that what looks like a dry wasteland is home to plants and animals that have adapted to life in searing summertime temperatures and an almost complete lack of water.

The Sonoran Desert is a virtual cactus heaven. The majestic saguaro (pronounced suh-WAHR-oh) can grow to 50 feet tall and live as long as 200 years.

Numerous other species of cactus also have found the Sonoran's arid conditions to their liking. They come in numerous shapes and sizes, and colorful names like purple prickly pear, organ pipe and teddy-bear cholla add to their appeal.

Also fascinating is how plant and animal life have adapted to the harsh environment. Some cactus have stems that expand to keep rainwater for later use. The saguaro can store enough water to last up to a year. The western banded gecko stores liquid in its long tail for later use when needed.

A choice of alternatives awaits visitors interested in exploring this other-worldly setting. On land, they include hiking, biking, horseback rides and off-road driving tours. Those who prefer to take to the air may choose a hot-air balloon ride or clamber aboard an airplane, helicopter or even a seaplane for a flight that includes a lake landing.

Some of the desert's magic and magnificence is captured in sanctuaries and museums. The McDowell Sonoran Preserve is a mini-wilderness which provides an excellent introduction to the desert. It's home to hundreds of types of plants and animals, and 60 miles of trails.

The Desert Botanical Garden contains more kinds of cactus than I knew existed. Five trails meander through an amazingly varied collection of arid plants from deserts around the world. Exhibits demonstrate how Native Americans used various plants for food, medicine and other needs.

In fact, reminders of American Indians are everywhere. An extensive collection of Indian art and artifacts is featured at the Heard Museum locations in North Scottsdale and adjacent Phoenix.

The Pueblo Grande Museum and Archeological Park sits atop remains of a village of the Hohokam people, who lived in the area from about 450 to 1450 AD. They were the first to cultivate the Sonoran Desert, using a vast system of irrigation ditches, some of which are still visible. Also intact are an excavated ball court, and full-scale reproductions of both early houses and a later-style adobe home.

Neighborhoods in and around Scottsdale combine interesting historical tidbits with an array of shopping and recreational opportunities. Old Town, located on the original site of the community, is a hub of museums, historic structures, dining, night life and shopping. Many of the city's estimated 125 art galleries also are there, offering works ranging from renderings of cowboys and Native Americans to avant-garde abstract pieces.

Other enclaves are very different in appeal. Cave Creek (population about 5,000) was settled in 1870 by miners and ranchers, and served as a stopping point for U.S. Cavalry troops. The town clings stubbornly and proudly to its western heritage, as home to several saloons and periodic rodeos.

The adjacent village of Carefree is very different in atmosphere. It was built as a planned community with homes now valued at millions of dollars, which line streets with names like Easy, Tranquil, Ho and Hum. Locals describe this juxtaposition of Old and New West as the "home of cowboys and caviar."

That same comfortable marriage of old with new, casual with chic is experienced everywhere in and around Scottsdale. This combination of upscale life with a laid-back attitude adds to its charm and appeal. 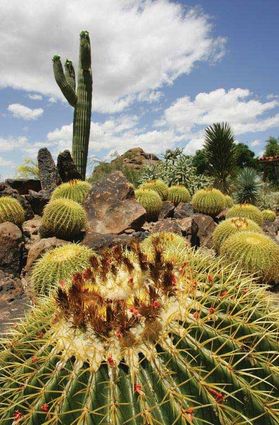 Far from barren, the terrain around Scottsdale is alive with animals and plants that have adapted to the desert, such as barrel cactus and saguaro.

For more information about a visit to Scottsdale, call (800) 782-1117 or log onto experiencescottsdale.com.