Fairbanks started out with some rich banks 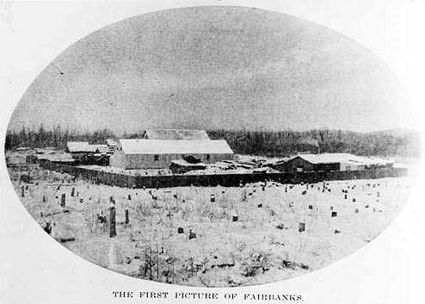 This is first known photograph of Fairbanks, circa 1902.

Felix Pedro joined the Klondike rush in 1898 from the Carbonado coalmines in Washington state. But his lucky number failed to come up, so he and Frank Costa, another Italian prospector, wandered over into the valley of the Tanana to prospect its streams and creeks.

Deviled by mosquitoes, and forced at times to eat some of their dogs, they traveled through the wooded valleys, climbed the rugged hills and faced moose and grizzly bears. In July 1902, Pedro struck gold on a small stream just 24 miles from the spot on the Chena that later became Fairbanks.

While Pedro was poking around searching for gold, a trader was beating his way up the Tanana on the riverboat Lavelle Young. Capt. E.T. Barnette wanted to establish a trading post on the upper river at Tanacross. By chance, he got into the Chena, a tributary of the Tanana. It was a lucky accident for him, as his trading post got in on the ground floor of the new strike.

A horde of prospectors rushed in to the diggings during the autumn of 1902 and winter of 1903, and some struck pay dirt. Dan McCarty found gold on what later was named Fairbanks Creek. J.A. Mathieson located more on Little Eldorado, D.A. Shea found rich prospects on Dome Creek and T.M. Gilmore struck it rich on Vault Creek.

By the summer of 1904, the news had spread and stampeders were hurrying down the Tanana. On May 20, as soon as the ice went out of the river, scows, rafts, steamers and small boats rushed from Dawson following the ice down the Yukon River.

When they reached their destination, they found a few log cabins clustered around several large, corrugated iron warehouses – and a scene of utter confusion. Household goods, barrels of whiskey, kegs of beer, lumber, steam-thaw boilers and crates of food were all jumbled together in chaotic disorder.

Tall brass scales took the place of cash registers, and gold dust the place of money. Miners tossed their pokes over the counter to the bartender to weigh out enough dust to pay the bill – $16 an ounce in trade was the rate. If stores stayed open all day and half the night to sell their wares, the dance halls, saloons and gambling houses got even by remaining open all night and well into the day to vend their merchandise. Gold shipments rose from $35,000 in 1903 to $3,750,000 in 1905.

Fairbanks had become a seething, exciting, feverish center of trade and vice.