Rod Serling's personal 'zone' was not at all like his show 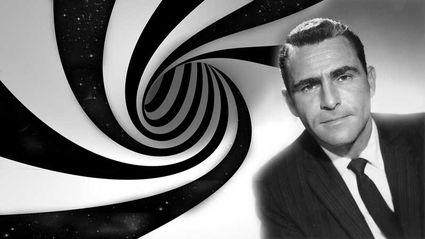 Rod Serling was the executive producer, chief writer and host of the "The Twilight Zone" for its five-year television run.

It's been called one of the most influential programs in the history of television drama. "The Twilight Zone," an anthology series that aired in the early 1960s, was created by Rod Serling (1924-1975), a veteran of radio and World War II. Both influenced his career as a writer.

"When he returned from war in the Philippines, he went to college and wrote for the campus radio station," daughter Anne Serling recently recalled to me. "He later wrote plays for commercial radio, then television. He said writing was a way to get the war trauma 'out of his gut.'"

During the show's five year run, Serling was executive producer and chief writer, penning more than half the some 150 episodes. But he is best remembered as the program's stone-faced host, whose foreboding narrations introduced the show each week. In biographies after his death, the master storyteller of chilling sci-fi and fantasy tales was often described as dark and depressed, inaccuracies that led Anne "to set the record straight" in her own book about her father.

"He was described as a tortured soul, but that wasn't my father at all," said Anne, who published, "As I Knew Him: My Dad, Rod Serling," in 2013. "Although the war left scars, he was also a very positive, fun, down to earth person. My friends adored him and any apprehension they had about meeting him would instantly dissolve because he could make anyone feel at ease. He was brilliantly funny at home, a great practical joker, and was always at the dinner table each night."

As a child, Anne had little knowledge of her father's career.

"I knew he was a writer, but didn't know what he wrote about until I was about 7. Some mean boy on the school playground asked if I was 'something out of the Twilight Zone,' but I had no idea what that meant because I wasn't allowed to watch much TV during the week – my mother's rule. A few years later, we watched 'Nightmare at 20,000 Feet' together, the episode where William Shatner sees a gremlin on an airplane wing. I remember looking at my father and thinking 'this is what you write?' It was a bit scary."

Praised for his original fiction writing, Serling was also highly respected for raising social issues in some episodes although controversial topics were subject to the censors' whim. So he frequently concealed his intent in fantasy.

"He famously once said he could have aliens say things that Democrats and Republicans couldn't," Anne recalled.

"We were talking politics and they said I had no right to open my mouth because I wasn't born in this country," recalled Bikel. Appalled, Serling appeared on a later program defending Bikel's right to freedom of speech. "I will never forget how Rod came to my defense. I later appeared in the Twilight Zone episode 'Four O'Clock,' in 1962."

Ann Jillian and Mariette Hartley were teenagers when they first met Serling.

"I was 13 when I starred in the episode, 'Mute,'" Ann recalled. "I was very excited about doing the popular show. Mr. Serling made me feel at ease and didn't talk down to me."

And after seeing him on TV, a gutsy 14-year old Mariette Hartley telephoned Serling and asked him to speak to her Connecticut high school drama club. 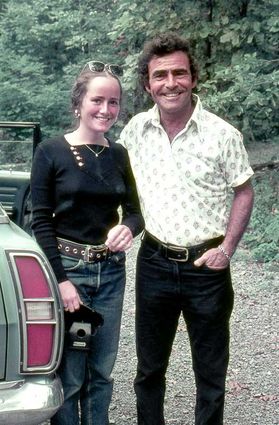 Rod Serling with his daughter, Anne, in the early 1970s. Ann grew up knowing little of her father's edgy program and image and describes him as fun and down to earth in her book, "As I Knew Him: My Dad, Rod Serling".

"He said he would be delighted and I can still see him sitting in the teacher's desk at the front of the classroom talking to us," Mariette said. "Years later, when I started working in Hollywood, I met him again when his limousine pulled up as I was walking out the studio. He remembered coming to my class. I told him I was looking for work and within a couple of months he gave me the wonderful gift of working in 'The Long Morrow' episode."

Today, Serling continues to inspire other moviemakers. J.J. Abrams, director of the new Star Trek films, has called "The Twilight Zone" a big influence on his career and reportedly has secured the rights to adapt Serling's last, never-produced script, "The Stops Along the Way."

Until then, Rod Serling's work is still available for your viewing pleasure, almost nightly, on classic TV cable channels .... in The Twilight Zone.

Nick Thomas has written features and columns for more than 350 magazines and newspapers. He can be reached at his blog: http://getnickt.blogspot.com.