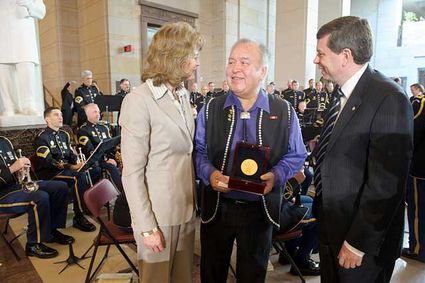 Alaska Senators Lisa Murkowski, Mark Begich and Congressman Don Young recently honored members of the Central Council of Tlingit and Haida Indian Tribes of Alaska and 32 other tribes from across the country for their critical service and unrecognized role as Code Talkers during both World Wars. Five Tlingit Code Talkers were the recipients of the Congressional Gold Medal, the highest Congressional honor, during a Nov. 20 ceremony at the U.S. Capitol in Washington D.C.

The Tlingit and Haida tribe was represented at the ceremony by Commander William "Ozzie" Sheakley, tribal leader Bill Thomas and Jeff David Jr., a descendant of one of the Tlingit code talkers.

Code Talkers were first utilized in World War I, when standard methods of communications had become decoded by enemy intelligence. Native American Code Talkers used their native tongue to communicate real-time wartime messages with great accuracy and speed, at a time when secret messages otherwise would have taken up to a half-hour to decipher their information. This top-secret communications method continued extensively throughout World War II in both the European and Pacific theaters, and also in the Korean War. But the code talkers were sworn to secrecy and the program remained classified until 1968.

"The critical role these men played in sparing the lives of fellow servicemen is remarkable," said Representative Don Young.  "By communicating in spoken code at places like Iwo Jima and Normandy, these fine men forever changed history. Because of them, we were able to relay real-time information on enemy positions, provide directions to troops on the ground, and gather intelligence that helped us end a dark time in the world's history."

"These Tlingit soldiers bravely passed along our nation's secrets at a very difficult time, but their story should not be a secret to Americans today," said Senator Lisa Murkowski.  "Alaska's World War II history is far too often an untold and unappreciated part of our nation's history.  Our territory was occupied in the Aleutians, our first people represented the Alaska Territorial Guard and our Code Talkers stepped forward with a willingness to defend a nation they had yet to fully belong to. I thank them and their people for their courage and commitment." 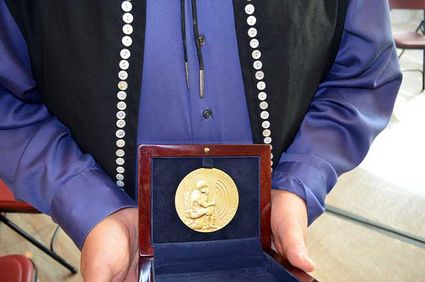 Sen. Murkowski and Congressman Young were both cosponsors of the 2008 legislation, the Code Talkers Recognition Act of 2008 (H.R. 4544), that honored these previously unrecognized tribal groups and veterans. Navajo Code Talkers were honored with the same distinction nearly a decade earlier.