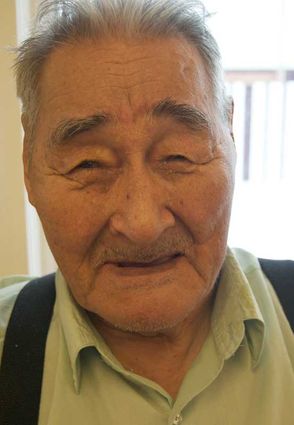 Wainwright's Rossman Peetook played in movies ranging from Disney family films to Steven Seagal action flicks. He also served in the military and on the North Slope Assembly.

Sitting in the Barrow Senior Center after lunch, Rossman Peetook of Wainwright looked back on his movie career with no trace of ego, something surely remarkable in an actor.

"They were making movies here in Barrow in 1969, a Walt Disney movie, and they were looking for actors," said Peetook. "One preacher's wife came from Wainwright to Barrow, and said, 'there's a man you have to see,' and they sent for me."

That started him off, and he went on to do three other Hollywood films. In 1970, he was hired for Walt Disney's Wonderful World of Color TV series "Snow Bear" Part 1 and 2, which became a full-blown feature film the same year.

"We were told, 'no profanity - it's a family film,'" he recalled. "Better watch your language all the time."

Filmed in Barrow, also in 1970, "The Snow Bear," also known as "Track of the Giant Snow Bear," had its location south of town along the Arctic Coast. The site, ever since jokingly referred to as "Hollywood" by locals, has remnants of the sod houses built and used by the production.

Still handsome and sturdy in his 80s, Peetook moves with a fluid grace from his years dancing and drumming in traditional Inupiat Eskimo dance troupes, and strength from his experience as a whaling captain. His straight, gray hair is slicked back showing a ruddy complexion that speaks of time out in the sun, wind and cold.

Another Disney television series was filmed in 1974, where he played the father, and was called "Two Against the Arctic." Filmed in Calgary, Alberta, Canada, Nome and St. Lawrence Island, its sensational movie poster barks, "A couple of Eskimo kids fight the battle of their lives for their lives!"

In 1994, he played a dancer in "On Deadly Ground," with Steven Seagal and Michael Caine. The movie, on location in Valdez, has Segal playing an environmentalist aiming to destroy a drill rig that threatens a pristine wilderness and the Natives' way of life.

The part was enhanced by Peetook's experience in drumming and dancing with local dance groups, and also as a composer of music and songs for use in church and cultural performances.

Asked if he enjoyed making movies he replied, "Well, yeah, it's something else I've never done before."

Being a card-carrying Screen Actors Guild member, Peetook's introduction to the world of film came from a combination of that curiosity and a drive to make sure his senior years were financially secure.

"When I was young, there was no jobs available," he said. "I was worried that when I was old, where would I get money?"

So, decades before he played in films, he left his village to join the military.

"I joined the military so I could have something when I get old, even if the pay was way down," he said. "I retired in 1984."

Peetook never had to leave Alaska when he joined up, and instead ended up stationed in his own village.

"I was lucky. I served in peacetime, no war," he said. "We became Army research in Wainwright."

In addition to serving his country for 33 years, Peetook also served his community as an assemblyman on the North Slope Borough Assembly, traveling back and forth between Wainwright and Barrow for meetings.

Gesturing around the room, he said, "We worked on this one and the hospital."

The senior center and the newly built Samuel Simmonds Memorial Hospital, both huge projects, have been completed, but as Peetook said, "It wasn't overnight work. I'm glad I could help"