By Kaylene Johnson
For Senior Voice 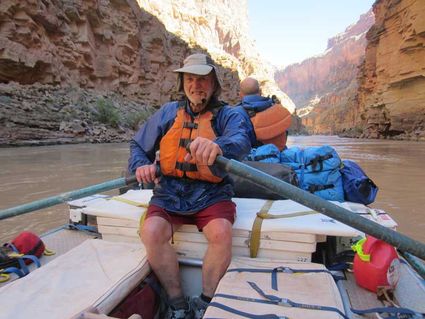 Dick Griffith, 86, works the oars during a 14-day Colorado River raft trip this fall. Alaska author Kaylene Johnson, who accompanied him on the trip, has written a biography of his life and travels.

Sheer canyon walls rose vertically on either side of the Colorado River as we approached the churning white water. Dick Griffith and I knelt on the floor of the inflatable raft, a position where we were less likely to be swept overboard. The next moment a cold wave crashed over us. I gasped for breath as one wave after another pummeled us. It felt like being flung around inside a washing machine not knowing which side was up. The raft was hung up on a rock with water pouring over the top. When we finally lurched out of the hole, Griffith was battered but grinning. A slight grimace indicated a bruised hand but he never complained. The man is 86 years old and the oldest living river runner of the Grand Canyon.

I met Griffith at a family dinner in Anchorage, Alaska in 2010. His son brought out binders full of photos and travel journals for me to see. I quickly fell headlong into Griffith's stories – pages and pages of colorful adventures as he traveled thousands of miles across the American west, Mexico, Alaska and the Canadian Arctic.

It took a while to convince Griffith that his stories needed to be told to an audience wider than his immediate family. Eventually he said, "You do it." And so, I set about writing his biography, "Canyons and Ice: The Wilderness Travels of Dick Griffith."

Over the course of a year, Griffith and I met weekly to discuss his adventures. From his copious notes, I learned how he pioneered rafting in the Glen and Grand Canyons and was the first to run the notorious Lava Falls in an inflatable raft. I read about how he and his late wife, Isabelle, were the first to descend the dangerous canyons of the Barranca del Cobre in Mexico. We talked about the fortitude it took for Griffith to ski and walk more than 6,000 miles alone and unassisted across Alaska and the Canadian Arctic. And we talked about the close calls that pushed him up against his own mortality. After telling the harrowing details, he often said, "It was no big deal."

I often think of these sessions as "Tuesdays with Morrie" meets "Into Thin Air." Through the course of the year it took to write the book, we became good friends.

I had never rafted the Grand Canyon and, especially in light of the book, wanted to experience this adventure with Griffith himself. He agreed to go along on the first commercial trip he'd ever taken. Griffith had gone on dozens of private trips (as recently as 2011) as a boatman and cook. On this trip, however, all the work would be done for us – our only job was to sit back and enjoy the sunshine and whitewater during the day, and the black velvet sky and stars at night. Our guides were delightful hosts of a landscape that defied description.

Griffith was not content to be a passenger on the trip however, and by the second day had finagled his way to a seat at the oars. He rowed much of the length of the river, leaving the big rapids to the younger guides. He finessed the smaller rapids and made sport of getting the guides wet while sparing the rest of the passengers. Each morning he got up early and watched the guides rise sleepily from their slumber on the boats, chiding them "Let's get those sticks in the water!"

They loved him and laughed with him, reveling in the stories that he told along the 226 miles of river. Griffith had lived much of the river running history that these young men and women had learned as part of their jobs; he knew the men and women in the very stories that they conveyed to their clients.

As I watched him interact with people on the trip, I thought about the things that Griffith has done to remain vibrant into his 80s.

Sedentary is not in Griffith's vocabulary. Over the years he has paid little attention to fitness for its own sake, but nonetheless he is always on the move. He cuts and stacks wood for his wood-burning stove. He walks his dog daily. In a journal entry he once wrote, "Our two-legged structure is perfectly capable of carrying us to a distant grave - we simply have to be willing to walk there."

He stays engaged. He calls himself a political junkie and reads the latest in news and economics around the world. In our international group of river travelers, he knew the presidents and prime ministers of all their countries and had conversational knowledge of their current political affairs.

He volunteers. He has made it nearly a full-time job to volunteer for the Eagle River Nature Center where over the years he has built cabins, outhouses and many miles of trails in Alaska. He grumbles about being too busy at times, but it doesn't keep him from his new hobby of building custom doll houses for his great granddaughter.

He maintains a sense of humor. While he laments that his strength and stamina are not what they once were, he is quick to make people laugh. He often tells people in their 50s, 60s and even 70s that they are in their prime. Don't waste time complaining.

On the last night of our 14 day oar trip through the Grand Canyon, I stared up at the stars and thought, "I think that at this point in his life - after all he's achieved and all that he's been through - Dick Griffith is still becoming his very best self."

I quietly pondered this under the canyon's canopy of sky. Perhaps that is what Griffith has taught me most in the few years that I have known him: The finest gift to others and ourselves is when, at any stage in life, we are still becoming our best selves.

Kaylene Johnson is the author of "Canyons and Ice: The Wilderness Travels of Dick Griffith." She lives in Eagle River, Alaska.