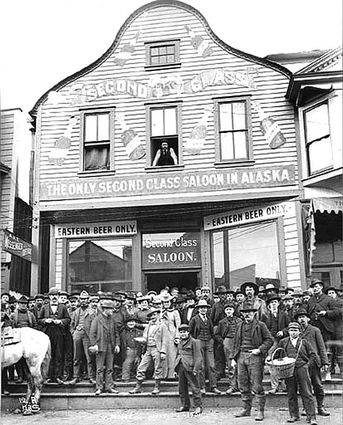 Wyatt Earp billed his Dexter Saloon in Nome, seen here in 1901, as 'The only second class saloon in Alaska.'

Many hardy gunslingers and prospectors who made Tombstone a household word in the late 1800s, landed in Alaska and the Yukon after the demise of the Arizona city. One of the most famous was Wyatt Earp.

Earp arrived in the north during the height of the Alaska gold rush in Nome. But he didn't go there to mine for gold. He'd fled Arizona under indictment for murder after the notorious massacre of the Clantons at the OK Corral and the shooting of Frank Stillwell.

A letter found in the basement of the Juneau federal jail in the 1960s shows that Earp may have intended to settle in the Southeast area for a while but was persuaded to move on.

The deputy disarmed Earp and told him he was not welcome in Juneau, according to Alaska State Troopers 50 Years of History. Earp left on the next steamship and headed to Nome.

Once there, Earp opened the Dexter Saloon, which coincidentally bore the same name as the Dexter Corral across Allen Street from the OK Corral in Tombstone. He advertised his drinking establishment as "The Only Second Class Saloon in Alaska."

The former deputy marshal was less than popular in the Alaska frontier town, according to some sources. Although Richard O'Conner in High Jinks on the Klondike said Earp could control a crowd.

"The rowdiest sourdough in the North country quieted down when he (Earp) flecked his eyes over anyone presuming to disturb the peace," O'Conner wrote. " ... he could face bad luck or danger with the professional gambler's icy nerves."

However, Anton Mazzanovitch told another story.

"After Wyatt struck Alaska, one night he started to show the boys up there how they used to pull a little show down Arizona way," Mazzanovich reported. "U.S. Marshal Albert Lowe took his (Earp's) gun away, slapped his face and told him to go home and go to bed or he would run him in."

Mazzanovitch's account was corroborated by a man named Blakeslee.

"Wyatt got a drink or two too much and got the idea he was a bad man from Arizona and was going to pull some rough stuff, when U.S. Marshal Albert Lowe slapped his face and took his gun away from him," Blakeslee later said.

Earp was in Alaska for four years – during the warm months. He always traveled south for the winter, where he worked on his autobiography in California.

In 1901, he turned up in the boomtowns of Tonopah and Goldfield, Nev., operating saloons, and it has been said, bunco games. He spent his final years working mining claims in the Mojave Desert. Earp died in Los Angeles, Calif., on Jan. 13, 1929, at the age of 80.

And even in death, Earp had some notoriety. Thieves stole the 300-pound marker erected over his grave.