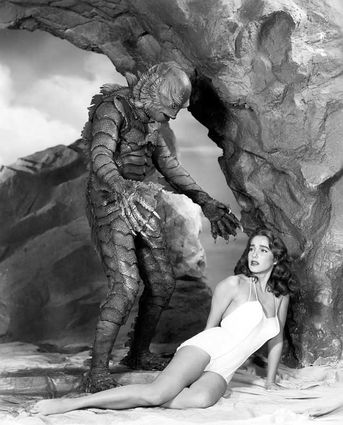 How much mileage could a studio expect from a 1950s film starring a biologist with a fascination for a secluded fishpond? Quite a bit, when the scientist is beautiful Julie Adams wrapped in a skin-tight white latex bathing suit and the fish turns out to be an angry piscine amphibious humanoid – aka "Creature from the Black Lagoon."

Premiering 60 years ago this month, the success of the now cult film continues to astound Julie who, at age 87, remains a popular guest at fan conventions and film festivals across the country. In March, she will be appearing at the Williamsburg Film Festival, WV (see http://wff5.tripod.com).

"It's amazing the life this movie has," said Ms. Adams, from her Los Angeles home, who portrayed scientist Kay Lawrence abducted by the infatuated Gill Man toward the end of the creature feature.

"It's a classic beauty and the beast story, with stunning underwater photography filmed at Wakulla Springs, Florida, because of its clear waters. The lagoon scenes were shot at the Universal Studios backlot where 'Gilligan's Island' was filmed."

Underwater, Julie was doubled by Ginger Stanley, while Ricou Browning donned the rubber creature suit for swimming scenes. On land, the creature was played by Ben Browning.

"Ben began going to fan conventions in the 1990s and convinced me to attend my first one in 2003," Adams said. "It's wonderful to meet so many people who still enjoy your work."

Fans have also shared some interesting admissions with Julie.

"Some told me they became zoologists or paleontologists because of the film. And I met a little girl who was named after my character!"

In 2011, the Arkansas-raised actress self-published her autobiography, "The Lucky Southern Star: Reflections from the Black Lagoon," coauthored with her son, Mitch Danton. The book contains some 200 photographs, many unpublished from her personal collection, with a chapter devoted to the Black Lagoon.

Of course, the Creature wasn't the only biped Julie costarred with during her career. She received top billing with less scaly characters such as William Powell, Glenn Ford, Charlton Heston, Elvis Presley, Rock Hudson and many others (see http://www.julieadams.biz).

"Rock and I were about the same age, so we became close friends and often played bridge."

One of her favorite costars was Jimmy Stewart, with whom she appeared in "Bend of the River," two years before the Black Lagoon. Two decades later, she reunited with Stewart in 1971 for the "Jimmy Stewart Show." 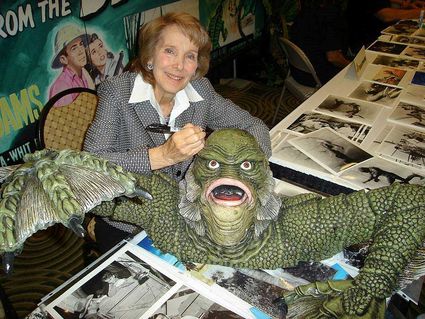 Julie Adams, 87, signs autographs at the Spooky Empire convention this past Halloween in Orlando, Florida.

"After I read for the part of Jimmy's wife, he gave me a little nod as if to say 'you've got the job' – and I did. Jimmy was wonderfully informal but professional, so it wasn't hard to pretend to be in love with such a lovely man and talented actor."

However, critics and audiences were not so enamored with the show, which was canceled after the first season.

"It was quite a charming show, but came out the same time as more edgy sitcoms like 'All in the Family,'" said Julie, who still remembers it fondly. "My idea of heaven was going to work with Jimmy Stewart every day for six months!"

Unlike the little-remembered TV show, "The Creature from the Black Lagoon" continues to gain fans from new generations. "Some projects just take on a life of their own," said Julie. "The Creature still walks among us."

Nick Thomas has written features and columns for more than 400 magazines and newspapers. He can be reached at his blog: http://getnickt.blogspot.com.