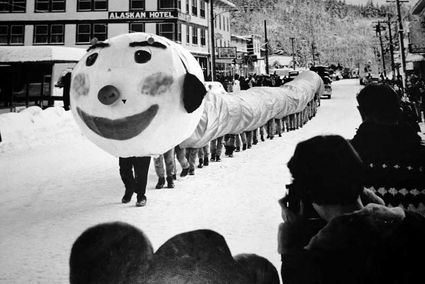 Cordova's Iceworm wiggles its way through the snow in the early 1960s.

Cordova's Iceworm, the brain child of Ohmer Waer in 1960, was a gallant effort to attract tourists to Cordova and combat midwinter doldrums. Waer, manager of the historic old Windsor Hotel, looked around the empty lobby one fall morning as he drank a cup of coffee.

"What this town needs is an iceworm," he told his wife.

Of course, Waer didn't mean a real iceworm. Discovered in 1887 on the Muir Glacier, that annelid worm spends its entire life in glacial ice in Alaska, Washington, Oregon and British Columbia, Canada. They can be black, blue or white in color and come to the surface of glaciers in the evening and morning.

Waer later recalled that folks bandied his idea about for a while. Then one evening he got a call from Bob Logan to meet over at his place.

"When I got there, he, Merle Smith of Cordova Airlines, Frank Smith and Harold Bonser were sitting around, and they asked me about my idea," Waer said. "We kicked it around, and before the evening was over, we had formed the 'Cordova Visitors Association,' and collected a goodly sum to start the ball rolling."

Just about everyone in town pitched in and did his or her bit, Waer said. The design of the iceworm, of course, was the first matter to be decided. Rosswogs had a supply of plastic hula-hoops that could be used for the framework. However, they cracked in the cold. Mr. Banta, of Banta's Builders Supply, then fixed new ones of oak that defied the elements.

Banta called Ohmer down to his shop one day to look at some aluminized nine-foot-wide cotton cloth. He said he could supply 150 feet of it. Soon the town women were busy working on the cover for the body of the iceworm.

"What's the largest length of cardboard you can supply, and how much does it cost?" Waer wrote to Zellerbach, the paper manufacturers. He went on to explain why he needed it.

A 15-foot length came back with a letter from the company.

"You don't owe us a cent; congratulations on a good idea," the letter stated.

The iceworm's head was Waer's design. However, the iceworm lost its head several times over the years. The original one blew off the dock, and another burned up in the fire that destroyed Cordova's ocean dock many years later.

When the first festival got underway that February, children screamed as the dragon-like creature undulated its way down the street, carried by eight legs belonging to local teens. Then and there, Cordova's Iceworm became an inseparable part of Cordova's history and the annual Iceworm Festival was born.

Visitors have come to the February festival from all around the world. The "Iceworm coin," a wooden buck accepted in payment for purchases, is now a collector's item, found in many European cities. A few even have reached Cordoba, Spain, the city for which Cordova is named.