The fantastic Fur Rendezvous of 1938 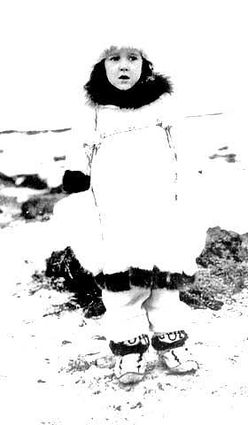 Dorothy Dickson McLaren, child-resident of Alaska and daughter of one of the state's pioneer bush pilots, recently glimpsed a picture taken from the 1938 Fur Rendezvous. Memories of that wonderful day remind Dorothy of leading the Queen's procession and fur style show at the 1938 – "biggest and best" – Third Annual Anchorage Fur Rendezvous.

Now a senior citizen, Dorothy recalls the excitement surrounding the coronation of the Queen of the Fur Rendezvous, Miss Grace Bailey. Indeed, Grace went on to the Fairbanks Ice Carnival and became Miss Alaska 1938.

Alaska Native girls from the Eklutna School made up one group modeling beautiful fur garments with intricate handwork. Additionally, the students brought along displays of handmade fur items and ivory carvings. In another event, male students showed off native dances, including their famous Wolf Dance.

A perpetual Alaska enthusiast, Dorothy wondered about the 2014 Fur Rendezvous festivities and checked the Internet to read more about past Fur Rendezvous as well. She found no on-the-scene reports from 1930s events, and thought that, as the 79th Annual Fur "Rondy" opens, folks may enjoy a bit of festival history, as told by Dorothy's father, Roy Dickson, Anchorage resident and 1930s bush pilot.

Roy Dickson, flying for Star Air Lines (early Alaska Airlines), became one of the airmen involved in the busy air traffic at the time. Pilots utilized all 41 planes based at Merrill Field to shuttle in people and furs, despite some hectic weather patterns. More pilots were seen in Anchorage during the festival than at any other one time. The occasion prompted a meeting and formation of the Alaska Air Pilots' Association. Elected officers were: President, Roy Dickson; Vice President, Bert Ruoff; and Secretary, Ralph Savory.

The town had become a busy trading center, and the event drew the biggest crowd Anchorage had ever welcomed. The Chamber of Commerce publicized the event and expanded the winter sports schedule, adding a carnival night and parade. Sled dog races continued to be an exciting spectacle for all. Alaska Railroad added a special train to bring people from Fairbanks.

Bush pilots had everything to do with the success of the "four-frantic-day" fur show and auction, with total sales of $18,000, compared to $2,000 in 1937. The airmen agreed to transport 50 pounds of fur (at no cost) for each trapper attending. Unexpectedly, word spread to the four corners of the Territory and beyond. Even the Fish and Game Commission in Juneau sent hundreds of confiscated furs for the auction.

Roy Dickson's entire family became involved in the 1938 Rondy. On a trip north, he bought a dainty white parka, black and white mukluks and an Arctic hare hat with mittens set to outfit his daughter, Dorothy, for the Queen's procession.

His wife, Ethel made ski pants from baby blankets, because there were no white ski pants available – and even found time to compose a poem for the event. The poem, titled "An Alaskan Pilot's Child," recited by Dorothy over radio station KFQD, beamed publicity to even the most remote outposts.