Ski Skagway for the Buckwheat Classic 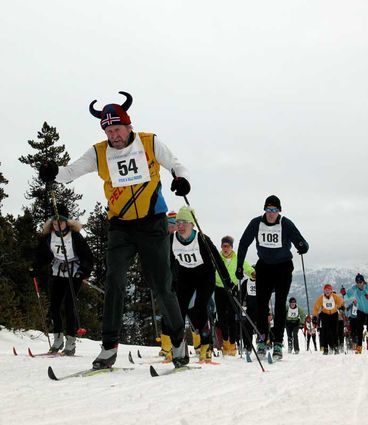 Registration is open for the annual Buckwheat Ski Classic cross-country ski race March 28 in Skagway, which started 28 years ago as a whimsical notion and has grown to festival proportions, with snow sculptures, an awards banquet and other celebratory fun. It's an excellent reason to take a winter trip on the state's road system.

One winter, I was sitting in Takhini Hot Springs, a bit north of Whitehorse, Yukon Territory, talking to a family from Anchorage there with their daughter for a ballet audition.

“Where are you from?” she said.

“Where is that?” she asked.

She turned to her husband and said, “I told you we needed to get out of Anchorage and see more of the state.”

And so do you.

Winter is a great time to travel throughout Alaska. No RVs on the road, the potholes are filled with snow, and large animals against a snowy background can be spotted before a T-bone.

Plus, there’s hardly anyone else on the road, so you can use what I call the “Anna True Driving Rules” — there’s no one else on the road, use the whole thing. Driving in the middle of the road gives you a 50/50 view of either side, aiding you in spotting any potential roadkill coming your way.

For cross-country skiers, the place to go in the winter is Skagway for the annual Buckwheat Ski Classic, held this year on March 22. It’s a rollicking good time for adults and kids too.

Conjured up one dark, Alaska winter night on a bar napkin, as is most any good idea in Alaska, by two Skagwegians, Buckwheat Donahue and Jeff Brady, the race is as unique as its namesake. Springing from a desire to bring more women into town during the lean winter months, presumably, because those in town were already known, the pair created something so successful that it has endured for 28 years.

A word about the man himself, having retired from running the race several years ago: Buckwheat is the director of the Skagway Visitors Center, but also presents dramatic readings of the work of Robert Service, for which he is well known.

The race begins with the starting pistol going off, closely followed by Buckwheat’s signature wolf howl.

The Buckwheat is held at historic Log Cabin, once a stop on the White Pass route during the Klondike Gold Rush of 1898, on a sliver of land in British Columbia between Alaska and the Yukon. The courses start at staggered times, and for the adults, include 50k, 25k, or 10k races, and for kids, 5k.

Note here that it’s in Canada, so you must have your passport to enter.

Every year is themed, and 2014 is “Life is a Circus.” It’s reflected in the halfway aide station that intersects the adult courses, and offers refreshments in the form of snacks and various libations.

Every year, there’s a spectacular snow sculpture. One year it was a huge Sphinx listening to a giant iPod, with stairs through its mouth and a sliding chute out the back. Children loved it, and so did some adults.

The snow-carving team will be in action as you read this edition, forming the walls for a gigantic circus tent that will house life-sized animals, perhaps even a bear.

Men in kilts are a common sight at this race, but be on the lookout for the one with a double-pocket hip pack, carrying two bottles of Lagavulin Scotch to warm you up. 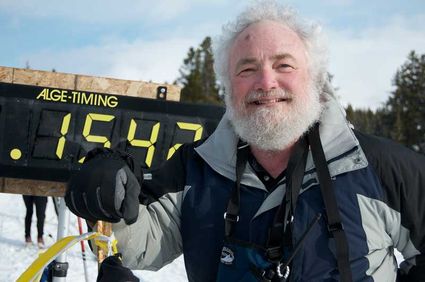 Race's namesake Buckwheat Donahue, above, brainstormed the ski competition with fellow Skagwegian Jeff Brady 28 years ago and the annual event is still going strong. It's an excellent opportunity for Alaskans to take a winter road trip.

There’s even a special category, DNF, which means the skier failed to even register on the timer because they were having so much fun at the aide station.

There’s a race day pancake breakfast, and an awards banquet that night, with both carnivore and vegetarian meals, and homemade pie. And later, a dance for those still willing and able to move.

To get to Skagway, you either fly into Juneau, and take a 6 ½-hour ferry ride along the gorgeous Lynn Canal, past whales and dolphins, and the picaresque Eldred Rock Lighthouse, or do the 18-hour drive down.

Visit http://www.buckwheatskiclassic.com for more information and where to stay. If hotel rooms are booked, a local will take you in, check on the website.

Billed as “a race designed for the lazy, the infirm and the few who are fast,” it’s perfect for boomers, who, while they are aging, are still wanting to test themselves.