Leonard Nimoy a star on both sides of the camera 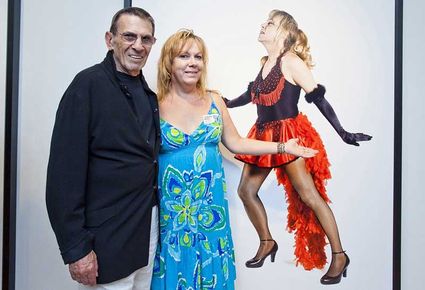 Leonard Nimoy poses with a subject and her photo, which appeared in his "secret self" photo project.

As Star Trek's Mr. Spock, Leonard Nimoy created one of the most iconic characters in television history. But for the past two decades, Nimoy has transported his career to the other side of the camera and is now regarded as a leading contemporary American photographer.

Early in his acting career, he recognized photography could be more than just snapshots on location.

"I carried a camera with me wherever I went and began to realize I was missing the place I was in because my eye was behind the camera so much," Nimoy recalled from his home in Los Angeles. "I had the photographs, but I hadn't had the experience. So I began using the camera when I was on a specific thematic quest."

The photography bug eventually bit him hard at the pinnacle of his career.

"I had finished three seasons of 'Star Trek' and two seasons of 'Mission: Impossible,' and I actually considered changing careers," Nimoy explained. "I went to school at UCLA to study photography under master art photographer Robert Heineken and became very excited about the prospect."

But with no enthusiasm for commercial photography, he realized a career in fine art photography would be difficult at the time.

"So I decided to stay with my acting and directing, although I continued to study photography and work at it."

Around 1994, he became a full-time photographer (while continuing to tackle some film and TV projects of interest), producing work that was largely concept driven – themes that told a story, rather than random, individual photos. His diverse subjects include hands, eggs, landscapes, nudes and dancers, all shot with black and white film cameras.

"My original idea was to replicate some rather famous images shot by other photographers who had used fashion models, and to use these women in those same poses."

More recently, for his Secret Selves project – his first shot in color – he photographed 100 people from all walks of life, each acting out a fantasy identity.

Nimoy, who is represented by R. Michelson Galleries in Northampton, Mass., will have three concurrent exhibitions in the Boston area beginning in late March – when the artist turns 83 (see http://www.RMichelson.com).

"The exhibits cover about 20 years of my career, so it's quite comprehensive."

Although Nimoy's works can be pricey (up to $18,000), more affordable images with a Spock theme (eg the Vulcan hand salute) are sold through a site managed by his granddaughter (www.shopllap.com).

"She's quite the entrepreneur and operates it like a classy boutique," said Nimoy.

"There are T-shirts, tote bags and photographs signed by me. The things we do for our grandchildren!"

In February, reports surfaced that Nimoy was suffering from Chronic Obstructive Pulmonary Disease, a lung ailment that affects some 13 million Americans according to the Centers for Disease Control and Prevention, and caused primarily by smoking.

"Before I stopped smoking 30 years ago, I was deeply addicted," he said. "I had to go through various programs before I quit. But by then, the damage was done. In my late 70s and early 80s, I recognized that I did not have great breathing capacity, so wasn't surprised by the COPD diagnosis."

"I use medication daily and give myself a jolt of oxygen when I need it," he said. "The main difficulty is high altitudes. We've had a house in Lake Tahoe for 20 years, which is a beautiful retreat. But at 6,000 ft, I just can't go there anymore. Other than that, I'm still very active and not ready to cash it in yet."

Despite rumors throughout his acting career that he resented being typecast as Spock, Nimoy says he regards the character with fondness.

"I've always been proud to be identified with Spock."

And what if J.J. Abrams, the producer/director of the new Star Trek films, approached him for another film role? 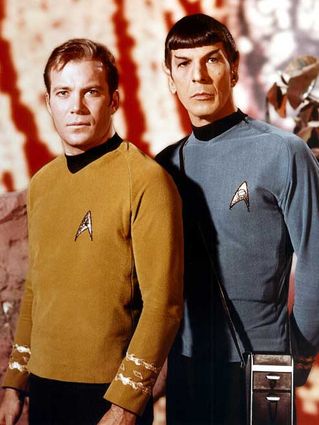 Best-known for playing Spock on the "Star Trek" TV series, Leonard Nimoy (on right), is a professional photographer.

"I'd take his call, but doubt I'd do any acting," he said. "I don't want to go off on location again. I'm enjoying life with my family too much."

Nick Thomas teaches at Auburn University at Montgomery, Ala. His features and columns have appeared in over 400 newspapers and magazines and can be reached at his blog: http://getnickt.blogspot.com