Seward's folly was his greatest source of pride 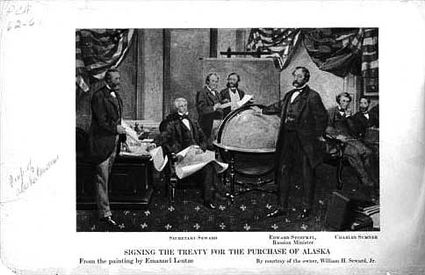 "Standing here and looking far off into the northwest, I see the Russian as he busily occupies himself in establishing seaports and towns and fortifications on the verge of the continent...and I can say, 'Go on and build up your outposts all along the coast, up even to the Arctic Ocean; they will yet become the outposts of my own country – monuments of the civilization of the United States in the northwest.' "

So predicted U.S. Secretary of State William H. Seward in a speech many years before the purchase of Alaska. That Alaska came into the possession of the United States was almost wholly due to his foresight and persistent efforts.

Most Americans at the time thought the idea fantastic and ridiculous. Some asked, "How can there be anything of value in that barren, worthless, God-forsaken region?" Others said, "The only products are icebergs and polar bears," and "The ground is frozen six feet deep and the streams are glaciers."

What did the author of this "egregious blunder, palmed off on a silly administration by the shrewd Russians" see in the northern territory and why did he work so untiringly for its purchase?

As secretary of state during Abraham Lincoln's administration, Seward could see what disadvantage the United States labored under because we had no advance naval bases in the North Pacific. He saw that we would have a foothold there if Alaska was ours. In fact, Seward believed we should have not only Alaska, but many more bases in other parts of the world.

If Congress hadn't stopped him, we now might have the Virgin Islands, the Isthmus Canal Zone, Iceland and Greenland. Congress stopped him from acquiring Hawaii for free, but he did succeed in getting Alaska and little, uninhabited, unknown Midway – Seward had the U.S. Navy take that island without saying anything to anyone.

The expansion of the United States to the ultimate edge of the North American shore and on to the islands of the Pacific had been Seward's dream for years – even while governor of New York, U.S. senator and finally secretary of state.

He never faltered in his faith in the value of Alaska. It's even reported that when he'd retired to the quiet of his home in Auburn, N.Y., he was asked by a fellow townsman what he considered his greatest achievement as secretary of state.

"The purchase of Alaska," Seward is alleged to have replied. "But it will take the country a generation to appreciate it."

Indeed, many years would pass before Seward's gift to the nation was recognized. But after Dec. 7, 1941, when Japan bombed Pearl Harbor, his foresight and wisdom could not be argued.