Spring shorebird festivals should be on your bucketlist 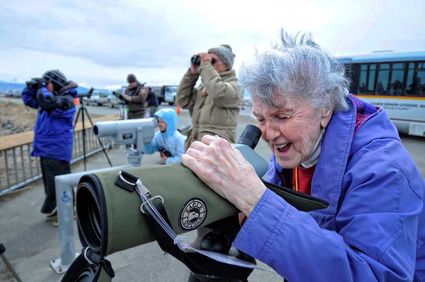 Longtime Homer resident Daisy Lee Bitters uses one of the free spotting scopes set up at a Spit birding station during last year's Kachemak Bay Shorebird Festival. The annual event is one of several in Alaska and the Yukon celebrating the spectacular spring return of dozens of species of migratory birds, from common snipe to majestic swan.

In the early 1990s, Barrow elders told of the huge clouds of returning migrating birds to the village that blocked out the sun. While Alaska and elsewhere no longer see bird population in those numbers, still, prepare to be wowed by the local festivals in small towns across the state.

Coming in May to a town near you are annual shorebird festivals, both on and off the road system.

Homer - for more than just the halibut

Homer, the place you love to go halibut fishing, is a mere four-hour drive from Anchorage, and will hold its 2014 Kachemak Bay Shorebird Festival from May 8 to 11.

Flying distances of up to 1,900 miles, dunlins and western sandpipers land in Homer to recover from their flight and to belly up to the huge tidal flats to put on calories for their ultimate nesting destination in the Yukon/Kuskokwim Delta.

Sandhill cranes also come through and some do stay behind for the summer. But late one September, I remember a lone crane sitting in a tree across from my family's cabin in Little Tutka Bay, looking like it had missed its flight. And it had. Their cry, like nothing in nature I have ever heard, is what I imagine an Archaeopteryx would have sounded like.

The shorebird festivals kick off the tourist season for towns across Alaska to gear up for the seasonal onslaught, which having lived in Skagway, I understand is greeted with great anticipation, but also some regret that the peace of winter is about to be shattered. But Homer's economy hums with the annual influx of visitors

In 2013, there were 1,000 registrants, with about 350 coming from Homer, according to the Homer Chamber of Commerce. And they figure there are about 1,663 beds that Chamber members offer, and another 120 beds across the bay in Halibut Cove, Tutka Bay and Seldovia, accessible by water taxi or ferry.

Drive, or fly a quick, 42-minutes on ERA, now Ravn Alaska, for $298. ERA used to follow Alaska Airlines mileage system, but it's gone to a point system where you earn 10 FlyAway Rewards points for every Era Alaska flight segment flown. A free one-way trip is 50 points. Dang! Now I'm totally confused as to how that will translate between Alaska Airlines and Ravn.

Workshops, speakers and special events were still being worked on as we went to press. Visit http://www.homeralaska.org for more information.

Scenic and quaint, Cordova's Copper River Delta Shorebird Festival, now in its 24th year, holds its 2014 festival during the same week as Kachemak's, May 8 to May 11.

Just about an hour's flight from Anchorage, at $298, on Ravn, Cordova is a bustling fishing village, nationally famous for its branded Copper River Salmon.

And the city is opening its new municipal building in Fall 2014 that houses city hall, the Cordova Library, the Cordova Historical Society Museum, and a conference center for up to 200 attendees. This is a major development for the city that will enhance all of its festivals, from the shorebird festival to its quirky Iceworm Festival.

Begun by the U.S. Forest Service, the federal entity Alaskans tend not to like, at first the Shorebird Festival was a two-day affair for researchers to exchange scholarly material on the avian population. It's now a partnership between the Cordova Chamber of Commerce, the NFS, Prince William Sound Science Center, local businesses, and dedicated volunteers.

Over 215 species of birds can be found on the delta and as many as five million shorebirds lay over during the migration. Dunlins and sandpipers pass through in huge numbers, but the Copper River Delta is also home to trumpeter swans, dusky Canada geese, mallards, northern pintails, and shovelers. Other birds that populate the marine environment include,black oystercatchers, common murres, marbled murrelets, harlequin ducks, and black-legged kittiwakes.

The festival has a call for art featuring birds and wildlife of the Copper River Delta and Prince William Sound. Those selected will be featured in the 2014 Shorebird Festival Program. Submit images via email to marinabriggs@yahoo.com. Low resolution is fine for first submission, with a deadline of April 4.

Go to http://cordovachamber.com for more information on workshops and special events.

Spring in the Yukon

Northern sandpipers arrive in huge numbers at the Homer Spit during the 2013 Kachemak Bay Shorebird Festival.

I must mention Swan Haven on the shores of M'Clintock Bay on Marsh Lake, south of Whitehorse, Yukon Territory. From April 12 to 20, the Yukon's annual Celebration of Swans salutes the arrival of thousands of trumpeter swans. The largest waterfowl in North America, some are on their way to breeding grounds in the Territory, although 85 percent of them nest in Alaska. They are impressive.

You can also drive toward Skagway on the South Klondike Highway and take the left at Carcross, the only one, to the Tlingit village of Tagish to see the swans on the Tagish River. There are so many, it's like watching large rafts of snow floating on the current.

If you want to photograph them, either take a huge zoom lens, or use a portable blind. They're easily spooked, then again, all of them taking flight is quite a sight.

For sure, put this one on your bucket list.