Home built in 1915 survives in Anchorage 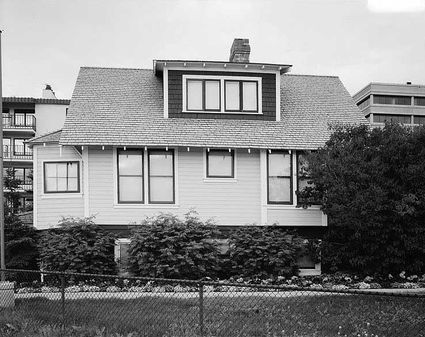 Have you ever wondered what it was like living in "the good old days" and wished you could step back in time? One Anchorage home listed on the National Register of Historic Places offers visitors that opportunity and showcases the furniture, appliances and gadgets from days gone by.

The Oscar Anderson House Museum, located at 420 M Street, is filled with memorabilia from the turn-of-the-last century. Built in 1915, it's the first frame house constructed in Anchorage and belonged to the community's first butcher. The home was renovated between 1978 and 1982 to appear as it had when Anchorage was a tent city.

Visitors taking the tour get a glimpse into a forgotten era as a historian talks about Anchorage's history and shows off items like a wind-up phonograph, a Hallet and Davis player piano and a wire "soap saver."

As one follows the tour up creaking wooden steps to view the three bedrooms on the upper floor, it's easy to believe the tales some people tell that Anderson, who with his family lived in the house for nearly 60 years, still lingers in the form of a ghost.

Following Anderson's death in 1974, at the age of 91, a young couple moved into the house and soon reported hearing noises upstairs, like someone walking around. One morning they couldn't open the door to his old room and found a chest had mysteriously slid in front of it and blocked the entrance.

Anderson's widow, Elizabeth, who'd moved to Washington state after the sale, was delighted when she heard about the strange occurrences. She said she always knew Oscar loved the house too much to ever leave it.

By his own account, Anderson was among the first group of people to set foot in the settlement on Ship Creek. The native of Sweden had taken a steamer from Seattle to Seward, then walked three days along a trail to Eagle River, where he stayed overnight with a Finnish trapper before pushing on to Knik.

In his later years, Anderson told the story of his arrival, which is printed on a kiosk in front of the home in Elderberry Park.

"Everyone talked about the new settlement starting across Cook Inlet from Knik. I had to find a way to cross over, which was no easy matter, as there was a lot of ice on the Inlet and no one wanted to risk it. Finally, a 19-year-old youth who had a boat volunteered to row me across. It was no pleasure trip. At one point, the boy fell in the water. We pulled onto a large block of ice. I took out some dry clothes from my suitcase and we changed his clothes. After that, I had to finish rowing."

By Anderson's account, he was the 18th person to set foot in the tent city at the mouth of Ship Creek. He soon partnered with Louis Jensen and started a butcher shop, Ship Creek Meat Market on Fourth Avenue, where Stuart's Photo now resides.