If you're sensitive, sit where he can't see you Despite a leg infection that sidelined him earlier in the year, Don Rickles is as feisty as ever. In March, the 87-year-old comedian began a spring tour of theaters and casinos across the country with stops in California, Nevada, Michigan, Connecticut and Wisconsin.\

But be warned! If you're in the audience and sporting a bad hairpiece, have an unusually curved nose, or are a little on the chubby side, Rickles could be waiting for you.

That's because just about everyone "annoys" Don in his act, which hasn't changed much in half a century. Sensitive audience members wishing to dodge the comedian's verbal jabs should probably cower in the back row.

Rickles says his performances are more than just some grumpy old-timer wandering around the stage. Nor do they involve telling stories with punch lines.

"I don't do jokes," said Rickles by phone from his home in Los Angeles. "My shows are a theatrical performance. They're not really mean-spirited, just a form of exaggerating everything about people and life itself."

Rickles traces his big break to an evening in 1957, during a Hollywood nightclub performance, when he advised audience member Frank Sinatra to go "hit somebody." Fortunately, the often moody Sinatra laughed, and the famed crooner swooned for Rickle's style of humor.

Years later, numerous appearances on the Dean Martin and Johnny Carson shows assured Rickles of comic legend status. He also appeared in several films, such as "Kelly's Heroes," and was the lead cast member in the TV series "C.P.O. Sharkey" in the 1970s.

"Sharkey was crazy and sharp-tongued, like my stage character,' recalled Rickles. "But I was worried the writers couldn't write for me."

While the show was not a disaster, it did suffer from weak writing and lasted only two seasons, being carried largely by Rickles' comedic talents.

"I'd like to see the show released on DVD. It's been talked about for years, but has never gotten off the ground. Hopefully it will." (Many episodes can be viewed on YouTube).

One TV outlet which was perfect for Rickles' style of comedy was the "Dean Martin Celebrity Roasts," which ran for a decade on NBC beginning in the mid-1970s.

"Some guys had writers, but I did everything off the top of my head. Nobody had any idea what I was going to say," he said. "What a joy it was to be on stage with the greatest comedians and entertainers of all time."

Stage, however, is where Rickles has always excelled. Always an equal opportunity offender, he not only delivers his sledgehammer comedy to the average guy in the audience, but to any friend, politician or celebrity within striking distance. Few take offense.

Ronald Reagan was a favorite Rickles target, and during the second Inaugural Ball in 1985 he addressed the president:

"Good evening Mr. President. It's a big treat for me to fly all the way from California to be here for this kind of money.... Now you're big, and you're getting on my nerves... Ronnie, am I going too fast for you?"

Probably not the most polite way to address a sitting president but, says Rickles, "Reagan had a great sense of humor and loved the attention."

In the coming year, Rickles is planning more than two dozen shows, but says touring has changed. 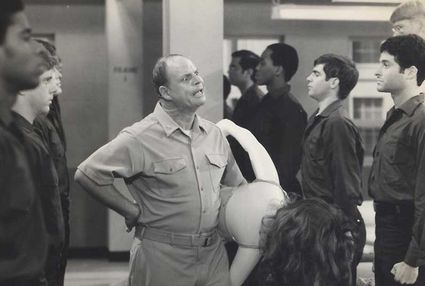 Rickles starred in the television series "C.P.O. Sharkey," which ran for two seasons in the 1970s. A DVD release has been discussed for years but in the meantime, many episodes can be seen on Youtube.

"In the early days, you would work at one place such as Vegas or Atlantic City for weeks at a time doing two shows a night," he recalled. "Now, with all the Indian casinos across the country, you're always traveling and doing just one or two shows at each place. These new casinos give performers a lot of comfort, they make the job interesting and some even provide private planes, but traveling can still be tough."

Given his age, recent illness, and the stress of traveling, audiences should be especially appreciative of the chance to see Rickles unleash his encyclopedia of wisecracks live on stage this year.

"When you're an entertainer, you're like a salesman who has something to sell – yourself," he said. "You can't please everybody, but most people who come to see me know what to expect. I'm proud of being the originator of this style of comedy."

Nick Thomas teaches at Auburn University at Montgomery, Ala., and has written features, columns and interviews for over 400 magazines and newspapers. He can be reached at his blog: http://getnickt.blogspot.com