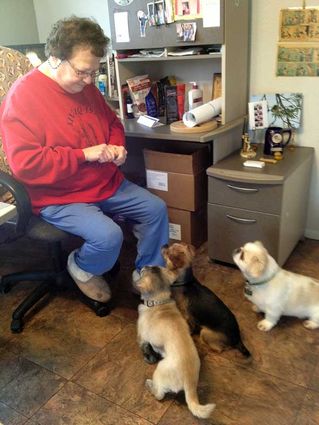 It's treat time at Elise Patkotak's Anchorage home, which she shares with three adopted Pekinese terriers and several adopted and rescued birds. Patkotak takes her care for animals into the community, volunteering as a licensed educator and lecturer for the Anchorage Bird Treatment and Learning Center.

It's Tuesday morning, and Elise Patkotak is heading off to the Bird Treatment and Learning Center on King Street in Anchorage. She has volunteered for this early shift for 14 years.

"I feel so privileged to be this close to the birds, to actually get to handle them," she says. And with her characteristic, somewhat quirky sense of humor, she adds, "I don't know if the birds feel the same way about me."

She admits she has long been enthralled with birds. It all started with Adeline – one bird – and a new credit card and an impulse.

Back in 1970, Elise Patkotak was living in an apartment in Brooklyn, New York, the proud owner of her first credit card with a $200 limit.

"I was in Abraham and Strauss – A&S – a very fancy department store. Having a credit card was a new deal. I'd gone there to buy a refrigerator for the apartment, for about $100. And then there was this bird, an Amazon parrot, for sale for $90. I knew nothing about birds, but told myself, 'Why not.' I couldn't have a dog or cat in the apartment. Why not a bird? And I had that credit card."

Adeline came home to the apartment 44 years ago. All those years have been full of stories of adopting birds and rescuing dogs -- a flock of orphaned and injured birds, and a tribe of all kinds of dogs with "special needs."

Adeline moved to Barrow with Elise in 1972, and would not be an "only pet" for long. She was soon joined by Captain, who is another Amazon parrot, and CB, a bare-eyed cockatoo. They were Barrow pet store birds, in need of homes when the "disastrous pet stores" failed.

And then there was Abdul, an African Gray, added to the household in the 1990s, when 'his person' got divorced and had no way to keep him.

Don't forget Morris, a Festive Amazon parrot, who belonged to a Barrow friend who couldn't keep him because of a demanding travel schedule.

Then there were her Barrow dogs. There was Lovey, a wandering Barrow mutt, and Mr. T, a miniature schnauzer, rescued from the small North Slope village of Anaktuvuk and brought to Barrow by the local vet.

By this point, it must have been obvious to all in Barrow who knew her that Elise Patkotak had a soft heart for animals in need – the elderly, the orphaned, the injured.

That soft heart and reputation for rescuing pets would follow her from Barrow to Anchorage. It was almost as if she had hung out a shingle declaring, "Open for birds and dogs in need."

Fast forward to today. I have come for a visit and to meet what Elise calls her "little family." I could not have known what I was walking into.

First, there is a stampede of exuberant little dogs, bouncing to greet me at the front door. Along the downstairs wall I see a row of spacious, metal birdcages and a tall platform stand, festooned with all kinds of dangling bird toys.

"I am in an aviary," I think. From overhead, up the stairs, comes a cacophony of sounds – whistles, screeches, snores, chuckles, even some boisterous meows.

I am soon to learn names. Those three little dog greeters are Carm, BuddhaBubba, and Snowy, all Pekinese or Pekinese-mix. Carm and Bubba are elderly, about 10 years old, and Snowy is blind in his right eye, the result of being chained out in the Mat-Su Valley's cold winters for two years.

Both Carm and BuddhaBubba are in need of what Elise terms "serious dental work." It's apparent. "I keep on top of their dental issues," she admits.

In those downstairs birdcages are Baby, Kenya and Sassy, all Senegal parrots, and Wilson, a Conure. Baby and Kenya came from what Elise calls "bad home situations," and Sassy and Wilson came first as foster birds.

But what about that uproar of sounds from upstairs? I'm still dazed by all that I have met and seen downstairs, when we go upstairs. Abruptly, Elise tells me, "No, don't sit there. Sit over here. I don't want something to get flung on you."

I do as I'm told and am soon grateful for the warning.

I meet Abdul, one of the birds transported from Barrow, and the source of most of the wild sounds I've been hearing – even the loud meows. Soon Elise addresses him in his cage, as she sways back and forth.

"We're gonna rock, gonna rock, rock!" she tells him, and yes, indeed, he is rocking out, swinging freely from one foot to the other. I'm curious. How did he learn to meow?

"From watching cartoons," Elise tells me simply. "I leave music or the TV on for the birds all day."

Abby is known to fling from his cage almost anything he can get his beak on, and he is now ripping up paper and flinging the shredded bits all over the floor.

I am amused and laughing. Soon I hear my laughter echoed back at me.

"Ha, ha, ha," Abdul screeches. I am being mocked. And I am not wanted because I am distracting Elise. "Com'on, com'on. Go out!" Abdul orders. I'm even told to "shut up!"

His language can become even more colorful, unprintable.

"How did he learn that?" I ask, somewhat startled.

"From a bunch of kids in Barrow," Elise tells me. She takes him out of his cage, and scolds him on her lap.

"What?" he yells, when being rebuked.

In a nearby cage in the living room are Captain and CB, two additional Barrow transports, and now living together.

"They tried to be a couple," Elise says. "CB wanted to be in a relationship with Captain. She even laid eggs for him. Now she's post-menopausal."

Again admitting she knew nothing about birds in the beginning, she'd placed a cockatoo and a parrot together. "That's supposedly not done," Elise says. "But it's worked out rather nicely."

So that "little family" now consists of two elderly dogs, a third dog with special needs, and seven birds, most elderly or with disabilities.

"I look at myself and say, 'I'm elderly. I'm often ill. If I needed to be adopted, I'd want someone to adopt me,'" Elise says.

She adds, "I don't have kids. I can meet the needs of this household of the infirm and elderly – despite any medical issues."

She does so, greatly amused by their antics, and with obvious affection, outright devotion. She's assembled this grouping originally with the help of the Parrot Education and Adoption Center, now the Alaska Bird Club, and the dogs through Friends of Pets, and AARF (Alaska Animal Rescue Friends).

And there's more. Through the Bird Treatment and Learning Center, Elise has become licensed as a lecturer and educator. She has a permit to keep Kodi, a northwestern crow and an education bird, in a shed she's renovated as an aviary in her backyard. 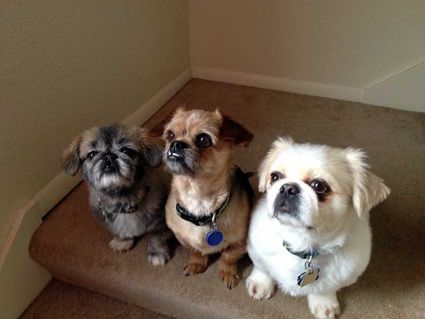 Left to right, BuddhaBubba, Carm and Snowy are quick to greet arrivals to their Anchorage home.

"We call him Kodi the Cache Crow," Elise comments, laughing. "We've taught him to put money, bills, in a jar, when people feed him money. He caches it. People love that! And Bird TLC needs those funds."

Want to help? The Bird Treatment and Learning Center will be holding its major fundraiser, a live and silent auction, on Saturday, April 12 at the Dena'ina Convention Center, from 5:30 to 10 p.m. It promises to offer "all things birdie."

Anyone wishing to donate items for the auction may drop them off at the Bird TLC clinic, 7800 King Street, Anchorage.

Perhaps while there, you, too, may be greeted by a bird that can swear, whistle and honk.