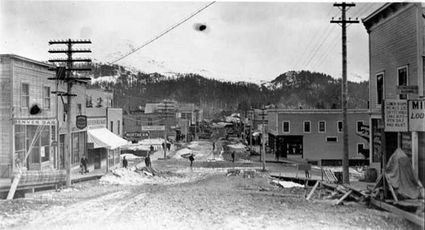 The downtown section of Cordova, seen here in early 1900s, was destroyed by fire on May 2, 1963. Looking south down Main Street in this photograph, the only place left standing was the Bowling Alley, Davis Grocery, Standard Station, the shell of the Times Building and the building next to it.

At 4 a.m. on May 2, 1963, Cordovans awoke to the sounds of fire sirens wailing through their streets. Then came a bombardment of ammunition as shells exploded in the basement of the Cordova Commercial Co., the town's largest store.

Six charges of dynamite, set off in an attempt to check the fire, broke windows all over town. But the fire did not stop until 14 buildings had been destroyed and more than 125 men, women and children were left homeless.

At the height of the excitement, everyone was too busy to feel the full impact of the catastrophe. Victims even joked with one another as they staggered out of fire-threatened apartments and stores under huge loads of clothing, bedding, furniture, household goods, gill nets, outboard motors and merchandise. They were relieved that no one had been seriously injured and could even see humor as the whole area around the fire began to look like a huge secondhand store.

"Where's the hot dogs?" one humorist shouted as the flames blazed higher.

By noon, with the fire under control, reaction set in. The tired, lined faces of Cordova's weary citizens showed that they now realized their loss. They gazed upon the blackened ruins of their only drug store, three clothing stores, newspaper office, jewelry store, airlines office, grocery store, barber shop, variety store, bars and restaurant – almost the entire business district of the town. Most wondered if the fire signaled the end of Cordova.

But the fire meant a rebirth instead of the death of the "stout-hearted city," as Alaska's Sen. E.L. "Bob" Bartlett once called Cordova. One week later, most businessmen were back in business. Even Harold Bonser, owner of The Cordova Times, put his weekly paper out on schedule, although it was mimeographed because his press and linotype had been destroyed.

Help poured into the city from all over the state. A chartered plane filled with business, civic and labor leaders flew over from Anchorage the day after the fire and offered their assistance – from banking service to the skilled muscles of organized labor.

State, federal and private agencies also cooperated, but Cordova's citizens didn't sit back expecting others to pull them through. They didn't waste any time feeling sorry for themselves. By their own efforts, they took care of everyone displaced by the fire.

"In fact," local civil defense leaders reported, "we had 104 more offers of temporary housing than we needed."

Gov. William A. Egan, in Cordova a few days after the fire, was impressed with the rebuilding progress.

"Because of your loss, I wasn't looking forward to this trip, but I find you are already planning ahead," Egan told them. "I am pleased you are thinking of the future and not of the past."

With the spirit and enthusiasm of pioneers past, Cordova's citizens knuckled down and rebuilt their town even better than before the fire.