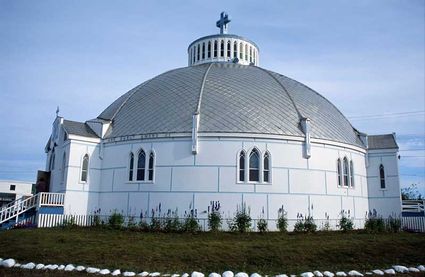 The Igloo Church in Inuvik, north of the Arctic Circle on the Dempster Highway.

A big state has to have a big road, and the Haul Road from Coldfoot to Prudhoe Bay is certainly that. And yes, Atigun Pass is at times both breathtaking and horrifying depending on the conditions, and entering onto the Arctic Plain with the mighty Brooks Range on your left is memorable. But the Dempster Highway, that's real adventure.

Beginning southeast of Dawson City in the Yukon Territory, it winds its way 457 miles, through the Northwest Territories, past the Arctic Circle, up to Inuvik on the Beaufort Sea - a classic Arctic village. There are many stops to make along its way, because unlike the Haul Road, it has settlements, and one thing its Alaska counterpart does not have - outhouses. Not stinky either. Yes, the Canadians are so nice they recognize the human need to eliminate and not befoul the countryside.

There are campgrounds too, in fact, 12. The Yukon government's roadside campgrounds offer picnic tables, campfire pits, firewood, and at least one picnic shelter, and of course, outhouses and hand-pumped, cold water.

Slow down and look around

You will be warned about the tire-eating road surface, and it is true. Halfway up at Eagle Plains, they have a tow ruck and tire repair service. Keep this number close to you: 867-993-2453. But you can avoid trouble with two simple rules: slow down and have really good tires.

One time, I traveled in an RV with a friend who had never driven the rig without her husband, and she was doing 55 mph. That is, until the flat just before Eagle Plains. Thanks to a kind Canadian road crew, it was fixed in minutes. But the RV did not have the appropriate jack, or even a tire iron. Be warned, be prepared, or pay up.

Even though the roadbed is claimed to be gravel, I swear past Eagle Plains it's shale, because it looks like you're driving over arrowheads. Drive really carefully, like 20 mph. There are rewards in poking along – you'll see more than if you blow by, and maybe catch that fat, old grizzly crossing just past Eagle Plains.

This site is an informative mile-by-mile guide: http://www.env.gov.yk.ca/publications-maps/documents/dempster_travelogue.pdf.

Even if you're pressed for time, stop and take a hike at the Tombstones in the Yukon, so called because of its coffin-like spires. The 2011 movie, "Big Year," was shot there, as a stand in for Alaska's Attu Island, with the unlikely casting of Jack Black as a birder. Wilson's warbler, dark-eyed Junco, northern hawk owl, and American kestrel are regularly seen in the Tombstone Mountain campground.

The sun shines 24 hours a day once you get above the Arctic Circle, which is at Mile 252, so do take time to explore along the way. If you're a rock or geology freak, you'll find yourself hopping in and out of your car with hammer in hand as your trunk fills up with specimens.

Albert Johnson, the Mad Trapper of Rat River, must be mentioned here, for he led the Royal Canadian Mounted Police on a two-month chase in down to minus 50-degree, whiteout conditions, until they caught up with him, near starvation, and stopped him with nine bullets. He was so clever he even tracked his snowshoes backwards to confuse them.

You can see his half-starved, wind-ravaged death portrait just before entering the restaurant at Eagle Plains, and I do believe it's a Canadian test of your intestinal fortitude.

In August, the Northwest Territory wisely hosts two gatherings at about the same time - The Great Northern Arts Festival and the Midway Music Festival on the Peel River plateau.

The first August weekend, the Tetlit Gwich'in of Fort McPherson hold a music festival featuring old time fiddlers and dancing, 50 to 60 entertainers, traditional dress, canoe races, storytelling and jigging dance contests for all ages. A tent city springs up and activities are round the clock. The tents are made nearby in Fort McPherson by the Fort McPherson Tent and Canvas Co., http://www.fmtent.ca.

For more information, go to http://www.tetlitgwichin.ca/MidwayLake.

In 2014, the only pan-northern arts festival in Canada will hold its 26th event. The Great Northern Arts Festival hosts 60 visual artists from across northern Canada and even Alaska. Like the festival in Dawson City, accepted artists are fed twice a day and given a table at the event for free, and some who are invited get free housing. This is a chance to meet celebrated Inuit carvers and artists from far-flung villages like Banks Island, Rankin Inlet and Igloolik. The carvers continue to work on pieces during the festival and they are fascinating to watch. Visit http://www.gnaf.org for more information.

On the way to Inuvik, you'll cross the mighty MacKenzie River on a free ferry, the Abraham Francis, which also makes a stop at the sweet, little village of Tsiigehtchic (sick-a-chick) at the confluence of the Arctic Red River and Mackenzie River.

At the end of the Haul Road, you can no longer get out and dip your toe in the Arctic Ocean (here the Beaufort Sea) - you can in Inuvik.

There's a full range of services in this town of 3,300 people. The Western Arctic Regional Visitor Center is located at the top of the hill on the right as you enter town.

It even has an igloo church, Our Lady of Victory Parish, a Catholic parish of the Roman Catholic Diocese of Mackenzie-Fort Smith. 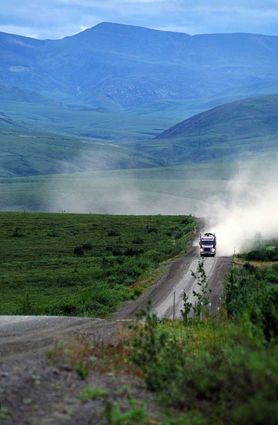 You can see trucks coming for miles on the Dempster Highway. Park in a pullout to avoid gravel damage to your vehicle.

Restaurants here offer musk ox burgers, or what I call the other-other white meat, and the best as far as I'm concerned, caribou.

Inuvik is a jumping off point for other places, like Tuktoyaktuk, or simply "Tuk," where in1995, the Molson Brewing Co. promoted its new ice-brewed beer by hosting a free concert, "The Molson Ice Polar Beach Party," featuring Hole, Metallica, Moist, Cake and Veruca Salt. Molson had to build a new community center after finding out the town had no venue big enough to hold all the fans.

On the way to Tuk, you'll fly over the massive MacKenzie Delta, home to migrating birds and waterfowl, and the Pingo National Landmark containing about 1,350 Arctic ice dome hills - approximately one quarter of the world's pingos – and they're much larger than the ones on the Haul Road.

This is a challenging road trip, but once made you will be drawn back to experience it in every season.