Historic days in the Matanuska Valley 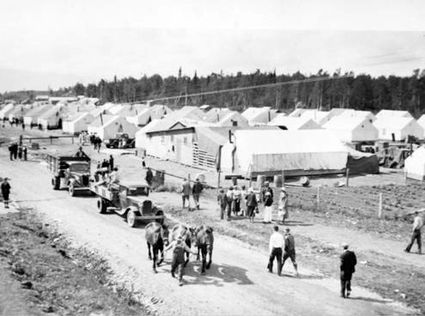 Palmer was a hub of activity during the summer of 1935.

Long before the Matanuska Valley became one of the fastest-growing communities in the nation, Russians tried to establish agricultural settlements on its fertile soil. They taught the Tanaina how to grow crops like potatoes, carrots, radishes and turnips.

In 1844, Russians founded settlements at Matanuska and Knik, as well as Kachemak, Kasilof and Kenai.

"A handful of Cossacks and a few hundred homeless mujiks [peasants] crossed oceans of ice at their own risk, and wherever timeworn groups of them settled in the cold steppes forsaken by nature, the places would begin to teem with life, the fields would sprout forth with grain and herds...," wrote Russian Alexander Herzen in 1859.

The U.S. Department of Agriculture established an experimental station one mile northwest of the town of Matanuska in 1917 and appointed Frederick Rader as its first agent. He oversaw the clearing of four acres of land, planting two with oats. Rader ran the station until Milton D. Snodgrass took over in 1923. Snodgrass, who stayed with the project until 1929, continued the effort to attract more farmers and ranchers to the area.

Ironically, it took the Great Depression of the 1930s to jump-start the population growth of the valley. In an effort to take people away from rural districts, where poverty had prevailed long before the Depression, and move them into areas where they might lead more productive lives, U.S. President Franklin D. Roosevelt's administration designed many resettlement projects.

Col. Otto F. Ohlson, general manager of the Alaska Railroad since 1928, convinced the U.S. Interior Department to distribute pamphlets explaining the agricultural possibilities around Palmer and pointing out its similarities to Scandinavian countries. He then helped the Federal Emergency Rehabilitation Administration plan the farming community, and Roosevelt approved the project known as the Matanuska Valley Colony in his New Deal in 1935.

By May 1935, 202 colonists were plucked from drought-stricken areas in Minnesota, Wisconsin and Michigan and sent north to the planned community. The farmers drew lots for 40 acres and a homestead, a deal that included a house, barn, out-buildings, a well and livestock. They also received loans at 3 percent interest to pay for it all. In addition, each family was given temporary housing, a food allowance, medical care and help clearing the land and building a home.

With a short growing season upon them, the colonists went to work tilling and planting while living temporarily in a tent city, which was named for G.W. Palmer, who arrived in the area around 1893 and started the Knik trading post. Within weeks of their arrival in their new home, some farmers were already selling radishes to Anchorage grocers.