Nearing 100, Norman Lloyd is still on the ball 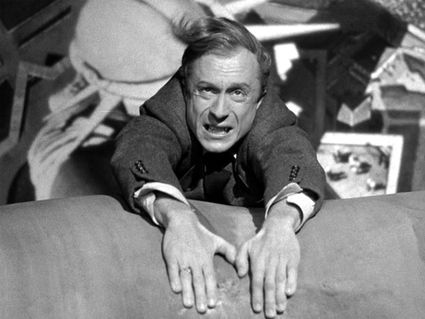 Norman Lloyd clings to the top of the Statue of Liberty in the Alfred Hitchcock film "Saboteur."

Norman Lloyd admits he's taking things a bit easy these days. This year, he currently has only one film waiting for release and he now plays just two tennis matches a week. Still, that's not bad, considering the veteran actor, producer, and director turns 100 later this year.

"People are always asking me for the secret of long life," said Mr. Lloyd from his home in Los Angeles. "Well, I have no secret and I suspect it's partly luck. But I do know one thing. You've got to stay active as you get older. And tennis is a great way to do that. It helps to take away all the aches and pains."

One of Lloyd's memorable singles opponents, whom he first met in the 1940s, was a childhood idol.

"Charlie Chaplin loved tennis and I was invited to his home by a friend to play," recalled Lloyd. "We became good friends, played regularly, and after would sit on his sun porch and drink a Scotch Old-Fashioned."

Off the courts, Lloyd appeared in some 40 films and numerous TV shows but was equally comfortable behind the camera as director or in the front office producing.

"Alfred Hitchcock hired me to direct many of his weekly mystery shows," said Lloyd, who also produced more than 200 episodes between 1957 and 1965. "I've been directing and producing since my early days in theater."

Lloyd and Hitchcock were no strangers on a train. The pair had worked previously on two films, "Spellbound" (1945) and "Saboteur" (1942).

As a villain in "Saboteur," Lloyd helped create a memorable Hitchcock sequence, staged from the lofty heights of the Statue of Liberty.

"Hitchcock recreated the arm of the Statue from the elbow up to the torch at full scale, on a Universal Studios stage," said Lloyd. "The closest I got to the real Statue during filming was the base."

In a scene with Bob Cummings atop of the Statue's torch platform, Cummings lunges at Lloyd with a gun.

"Then I fall over the rail," explained Lloyd. "Hitchcock was a master of 'writing with the camera' from his silent film days and wanted the scene in one take. So instead of cutting to a stuntman, he asked if I would do it. I was an accomplished tennis player at the time and quite athletic – not to mention being young and foolhardy – so I agreed to do a backflip over the rail."

Out of camera view, Lloyd says a platform had been constructed to catch him, but the stunt was still risky.

"The platform was about 14 feet high and covered with mattresses and a man was there to catch me and prevent me from rolling off. But in the scene, after I go over the rail, I grab onto a ledge and Bob tries to pull me up by my jacket, but the stitches begin to break and I fall. Hitchcock didn't use any music in the scene, just the sound of wind which was brilliantly effective."

On TV, Lloyd is best remembered as a regular in the groundbreaking 80s medical series "St. Elsewhere." He played Dr. Daniel Auschlander in over 130 episodes during the show's six year run.

"The show dealt with subjects never discussed before on television," noted Lloyd. "To my knowledge, it was the first time that AIDS was featured. It also examined issues such as the expense of dialysis for patients, and other topics included religious themes. The writing was brilliant with a superb cast including Ed Flanders – I don't think there was a finer actor in America – and Denzel Washington who went on to have great success."

In addition to his accomplishments in entertainment and on the tennis court, Lloyd can claim one of the longest marriages in show business history – to stage actress Peggy Lloyd, who passed away in 2011.

"A couple of days before she died, she asked how long we had been married," recalled Lloyd. "I told her 75 years and she said 'It should last.' I thought that was charming."

As his milestone birthday approaches in November, Lloyd knows exactly how Peggy would want him to celebrate.

"My tennis friends and I are going to have a big tournament on my 100th birthday," he said. "Perhaps at that age they may forgive me if I cheat a little."

Nick Thomas (www.getnickt.com) teaches at Auburn University at Montgomery, Ala., and has written features, columns, and interviews for over 400 magazines and newspapers.