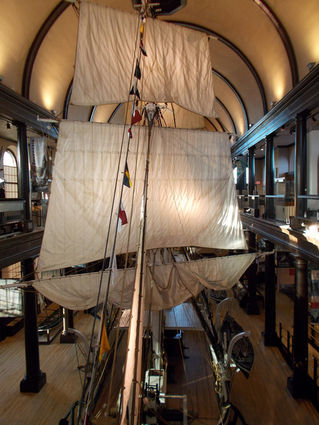 Explore life on a whaleship by climbing aboard the barque Lagoda, right, an 89-foot, half-scale model specially built inside the New Bedford Whaling Museum's main gallery in 1916. The sails are set and its gear rigged – all set to sail!

New Bedford, a whale of a place to visit

Before Alaska was bought by the United States, there was one Massachusetts city that already had direct links to the Territory.

New Bedford, the number one fishing port in the country right behind Dutch Harbor, in the 19th century was the east coast center for the whaling industry, harvesting baleen and oil for the masses. Its ships took the long voyage around South America and up the West Coast into the Arctic Ocean in pursuit of the bowhead whale.

In late June 1871, 40 whaleships passing through the Bering Strait to hunt whales neared Wainwright in August and 33 were trapped south of Point Franklin behind the pack ice. Although all of the ships' hands were rescued, 33 New Bedford ships were lost. They still lie on the ocean floor despite repeated attempts to find and salvage them.

In present-day New Bedford, the past is at your feet in the form of cobblestone streets, some of the old warehouses and the ghost of Herman Melville.

Every January, the New Bedford Whaling Museum hosts a "Moby Dick" reading marathon for those who love the story of the white whale.

You can visit the Sailor's Bethel just down the street, where Melville set the sermon he heard on Jonah and the whale before shipping out.

The museum also has an Alaska connection through collaborations with the Barrow Cultural Center on the North Slope, and some Inupiat elders bear old time New Englander names like Silas, Samuel, Dorcas or Hester.

Because New Bedford was such a rich community, it boasts the finest array of 19th century architecture erected by successful whaling captains: Federal, Greek Revival, Gothic and some made of cut granite.

Even Melville commented on it in "Moby Dick":

"Yet, in spite of this, nowhere in all America will you find more patrician-like houses; parks and gardens more opulent, than in New Bedford. Whence came they? how planted upon this once scraggy scoria of a country? ... Go and gaze upon the iron emblematical harpoons round yonder lofty mansion, and your question will be answered. Yes; all these brave houses and flowery gardens came from the Atlantic, Pacific, and Indian oceans. One and all, they were harpooned and dragged up hither from the bottom of the sea ..."

Frederick Law Olmstead, who designed Central Park in New York City, it was his firm in 1895 that developed a master plan for Buttonwood Park, a 97-acre oasis in New Bedford, complete with a zoo, and now listed on the National Register of Historic Places.

The city also played an important part in the Abolitionist Movement of the 19th century, and was home to Frederick Douglass, who lived here for several years after escaping slavery.

In Alaska, we forget how young a state we are compared to Massachusetts, with its New World immigrants' gravestones marking deaths in the 1600s. Graveyards here are a great place to see some headstones with amazing stone carvings and pity farewells.

Take a free walking tour with National Park Service rangers though the New Bedford National Historical Park from its headquarters. They take place in the morning and afternoon every day of the week.

Try and take a side trip to the historic island of Nantucket, reachable by ferry, or by plane from Hyannis or Harwichport.

Nantucket engaged in the sperm whale industry that produced highly prized candles and oil for dark New England nights, and gave rise to the term "Nantucket sleigh ride," when a whale would take a dory after it was harpooned and swim away with it.

Nantucket, translated from the language of its Native Wampanoag tribe, means "The Faraway Land," but it is only 30 miles off the south coast of Cape Cod, and but 14 miles long and 3 1/2 miles wide. Compact, it's a great place to bike, except in a Nor'easter as I once did with a friend and we were hanging onto a signpost in driving wind and rain. 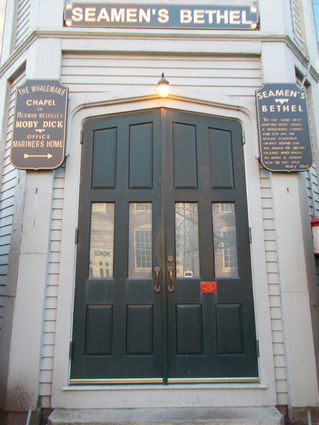 The Seamen's Bethel in New Bedford, built by the Quakers, was described in Herman Melville's "Moby Dick," and it is where he heard his last sermon before shipping out. Bethel comes from the Hebrew word of house, "Beth," and "El" translates as God, meaning House of God.

Weather rolls across this flat island with a vengeance, and a lightning and thunderstorm is better than Fourth of July fireworks.

Along with its great architecture there is a whaling museum and a cobblestone main street made of ballast stones from whaling ships.

I spent a summer there once as a seasonal, partying way too much at local bars as do all college seasonal workers, and body surfing at Surfside Beach and getting poleaxed into the sand by its sizeable and strong waves. For a calmer beach experience try the ones facing the arm of Massachusetts.

While it can be a pricey destination, there is the Star of the Sea Hostel on the site of the Surfside Life Saving Station - very quaint and very New England.

But really, food prices anywhere in Massachusetts would make an Alaskan weep with joy.