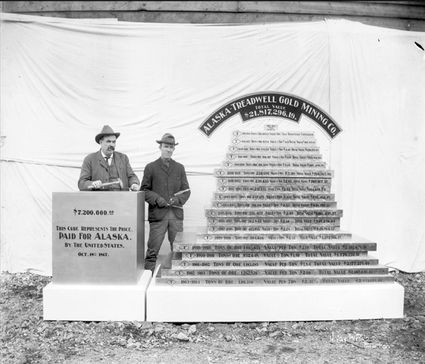 Workers at the Treadwell mine dug out gold valued close to $22 million between 1885 and 1904. In this photograph, two men stand near a cube that represents Alaska's purchase price of $7.2 million.

A gambler's hunch compelled California mining magnate John Treadwell to purchase a claim from "French Pete" for $400. That decision turned into the discovery of the famed "Glory Hole" on Douglas Island in Southeastern Alaska in 1881.

Gold had been discovered in the Silver Bow Basin near Juneau in October 1880. Joe Juneau and Richard Harris, along with Sitka chief Kowee, had trekked through moss, slippery rocks and devil's club to get to a place the Tlingits called Bear's Nest.

"It was a beautiful sight to see the large pieces of quartz, of black sulfide and galena all spangled over with gold," Harris later wrote.

That discovery led to Alaska's first big gold rush, and the influx of white prospectors changed the dynamics of the area by leaps and bounds. Trading posts, breweries and saloons popped up overnight. By March 1881, monthly steamship service was bringing in supplies to the placer mines along Gastineau Channel.

The Treadwell Mine, which over time grew to use 900 stamps, became one of the largest quartz lode mines in the world. It was so deep that men working at the bottom and along the sides appeared scarcely larger than flies when one looked down on them from the top.

Ella Higginson recounted her experience of dropping down into the mine in 1905 in her book, "Alaska: The Great Country."

"...there was barely room on the rather dirty 'lift' for us. We stood very close together. It was dark as a dungeon.

"As we started, I clutched somebody – it did not matter whom. I also drew one wild and amazed breath; before I could possibly let go of that one – to say nothing of drawing another – there was a bump, and we were in a level 1,080 feet below the surface of the earth."

"We stepped out into a brilliantly lighted station, with a high, glittering quartz ceiling," Higginson continued. "The swift descent had so affected my hearing that I could not understand a word that was spoken for fully five minutes."

The scenes which met Higginson's eyes included shafts, ore bins, drifts, levels, stations where quartz-laden cars passed and stopes, which were areas where the ore was removed.

Tram cars, each drawn by a single horse, carried ore from one location to another. "One horse had been in the mine seven years without once seeing sunlight or fields of green grass," Higginson wrote. "But every man passing one of these horses gave him an affectionate pat, which was returned by a low, pathetic whinny of recognition and pleasure."

She said each man worked by the light of a single candle in the dark in a stooped position, as the ceilings were so low. The ore was piled in areas where it would then be dumped into lower levels and hoisted up and out of the mine.

The Alaska Treadwell Gold Mining Company bought out John Treadwell and his investors for $4 million in 1889. Following the sale, Treadwell returned to California, where he became associated with his brother, James, and started a trust company that went broke. In 1914, Treadwell filed for bankruptcy in New York City and died in a hotel there in 1927 at the age of 85.

The Treadwell organization, which included four mines called the Treadwell, 700-foot, Mexican and Ready Bullion, operated for 36 years and produced $66 million in gold. A cave-in and extensive flooding in 1917 brought its era of prosperity to an end.