Go outside and enjoy summer while it's here 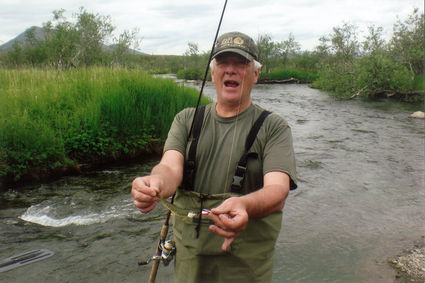 Leonard Kelley says some of the grayling he caught on his recent Arolik River fishing trip were among his largest ever. This was not one of them.

We at OPAG advocate a healthy lifestyle for seniors. We encourage seniors to partake in every outdoor activity in Alaska, whether it is snowmachining, river boating, biking, hiking, hunting, fishing or photography.

This July four friends and I fished the Arolik River, which is located southwest of Bethel. The river is only 25 miles long starting at Arolik Lake and ending at the village of Quinhagak.

The river was particularly low resulting from a lack of winter snow and rain. This required us to pull our rafts for several miles until we reached floatable water. This took 10 hours. Slippery rocks and constant getting in and out of the boat played havoc with my knees and hips. The loaded boats weighed about 500 pounds.

The first part of the trip taxed me, but not nearly as much as a group of eight fly-fishermen from New York. These fellows ranged in age from the mid-sixties to seventies. They started three days before us and would leave the river two days before us. We would be on the river nine days and caught up with them on day two. They were whipped puppies, but they sure got an A for endurance and were an excellent example of what seniors can do if they only try.

The Arolik is a fly fisherman's dream; it is relatively shallow, easy to fish and full of fish.

Each night around 7 p.m., after a day of fishing, we would find a suitable gravel bar for our camp. The first job was to put up the sleeping tents, then the bug/eating tent. This process would take about an hour. Then it would be time to prepare dinner, have a couple of drinks, fish, have a couple of more drinks and then off to bed.

The next morning we would have breakfast, break camp, load the rafts and we were off for the day. We would usually leave by 11 a.m. and fish the rest of the day while we floated.

The most effective way to fish was to have one person fish around the raft, while the others walked downriver fishing. The person with the raft would then pick up the advance fly fishermen. The process would continue for the rest of the day.

At the lake we caught lake trout. Graylings were caught for the rest of the trip. I exclusively use a 7-weight fly set up with a light sinking line. Some of the grayling weighed almost 3 pounds. The grayling were some of the largest I have caught on any river.

Once we got into floatable water I caught numerous dolly varden, the occasional chum salmon and rainbows. Most fish were caught using an "egg sucking leech."

I started catching large rainbows once I switched to a brown "Muddler" and "scalpine." These are fairly large flies and confirm the old adage that large fish like large flies.

Most of the rainbows were in the 1.5 pound range, a few were larger, but no monsters. All rainbow were released, but we kept dolly varden for "appetizers." Dolly Varden are particularly delicious fish and their eggs are particularly palatable when eaten fresh. The weather was warm with no rain or wind, until the last day. It was a great trip and one I would recommend to any healthy senior.

Leonard Kelley is the board president for Older Persons Action Group, Inc.