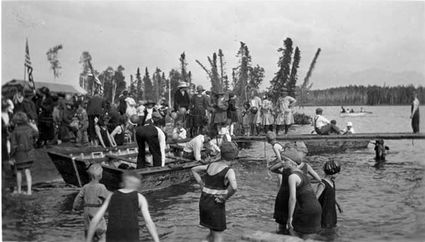 Anchorage residents gathered at Lake Spenard for picnicking, swimming and boating in the early 1900s.

The section of Anchorage called Spenard was referred to as the "Miracle Mile" not so long ago. As part of the Chugach National Forest created by U.S. President Teddy Roosevelt in 1907, the land was locked in a government deep freeze for several years.

When the residents of the Alaska Railroad camp asked that the land surrounding the new town be unshackled in 1919, the government lifted its restrictions on the property. The growth of Anchorage to the south could not have happened if this "miracle" hadn't occurred.

Before the land opened for private ownership, however, a couple of men had called the land their own. Thomas Jeter, one of the area's first homesteaders, built a cabin there in 1909. But he had been forced to give up the land by a court order five years later because the Forest Reserve land hadn't been open to homesteading at the time.

That's when a feisty little man named Joe Spenard moved in. He'd been cutting wood in the area for some time and blazed a trail through the wilderness that wound around Chester and Campbell creeks. One day he stumbled across a beautiful lake a few miles from the railroad community.

He set up camp at the spot and started chopping wood – regardless of laws that prohibited cutting trees in a forest reserve. Spenard told folks that he acquired timber rights in what he called his "homestead," although land office records don't confirm such a claim.

He also made improvements to the land, which included a full-scale resort with a roadhouse, bathhouses and a swimming beach. Spenard opened his recreational resort in August 1916.

Spenard also operated a small transfer business, which he'd started in Valdez before moving to Anchorage. He bought a REO truck – said to be the first auto truck in town. He donned a yellow suit, to match his bright-yellow truck, plastered lost and found notices and tide information on the sides of the vehicle and painted "Time and Tide will not wait, but City Express is never late" on its radiator.

Known to enjoy a "good time," Spenard made it into the local newspaper on at least one occasion. The Anchorage Daily Times reported:

"Joe Spenard caused considerable excitement Saturday afternoon when he attempted to drive his yellow car through the doors of the Robarts pool hall. He made the attempt for a box of cigars promised him by Jack Robarts if he accomplished the feat; otherwise he was to pay the damages. Joe is still smoking his pipe."

In September 1917, Spenard sold his beloved Reo and headed for California to seek medical treatment for a heart condition. Although he planned to come back to Anchorage, he never returned and died in Sacramento in 1934.

Although Spenard the community did not start growing until 1949, it seems to have taken on some of the characteristics of its namesake – the unorthodox, hustling, spunky Joe Spenard.