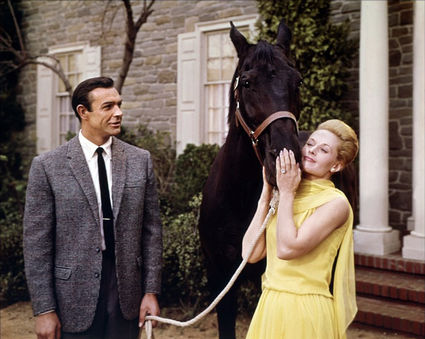 Tippi Hedren starred as the title character with Sean Connery 50 years ago in the Alfred Hitchcock film "Marnie."

Released in the summer of 1964, "Marnie" wasn't a typical Alfred Hitchcock thriller. While a moderate success at the box office, the eponymous psychological mystery was panned by some critics at the time.

"People didn't understand the film when it first came out," said Tippi Hedren, who starred as Marnie, a disturbed woman, compulsive liar and thief, with a resolute disdain for men.

"Something really bad happened in Marnie's childhood. Critics look at 'Marnie' entirely differently today, now that we understand more about how an early traumatic experience can manifest itself later in adult life. The story was really ahead of its time."

Hedren, who turned 84 in January, went to great lengths to prepare for the role.

"I read the novel the film was based on over and over, spoke with author Winston Graham, and consulted psychologists and psychiatrists in order to understand the character."

"The man was absolutely gorgeous!" said Hedren of Connery, who was fresh off the success of his first James Bond role in "Dr. No."

"I asked Hitch how could I play a character who wasn't attracted to one of the sexiest men alive."

His response, she says, was typical Hitchcock: "It's called acting, my dear."

Hedren's acting skills were also evident in one scene where she appears to confidently gallop across the countryside on horseback. In fact, she was perilously staged atop a 17-hands high horse trotting on a large treadmill.

"It was horribly dangerous – a horse on a treadmill! If he had tripped, I would have gone flying off," said Hedren. "Hitchcock made me do such dangerous things, I'm amazed I'm still alive!"

The experience was reminiscent of Hedren's previous movie, "The Birds," a year earlier – her debut in feature films, also directed by Hitchcock. In the final brutal bird attack scene, Hedren was secured in a cage and mauled by ravens and gulls.

"All through production I was told that scene would be done with mechanical birds," recalled Hedren. "It was only on the morning of filming that the assistant director told me they would use real animals. For five days, the bird handlers hurled the birds at me."

Unlike Marnie whose life was shattered by an early trauma, Hedren's Hollywood wildlife encounters propelled her into animal activism, especially after seeing large cats in Africa while filming "Satan's Harvest" (1970).

She later founded The Roar Foundation and Shambala Reserve (www.shambala.org), a 72-acre sanctuary in Acton, Calif., for large cats rescued from zoos, circuses and private owners.

"I bought the land in 1972 and turned it over to the foundation. Today we have about 40 cats," said Hedren. "I live on the reserve and the fence is only three feet from my bedroom window so I can look out and see tigers walk by! The roaring at night is absolutely thrilling. Visitors can come to our summer sunset safari when the animals are awake and roaring. It's an extraordinary evening."

However, running Shambala is expensive. "I have to raise $75,000 every month."

In her role as activist, Hedren was also successful in lobbying Congress to pass a 2003 bill ending the interstate traffic of large cats.

"Currently, there is another bill – The Big Cat and Public Safety Protection Act – in committee in the House and Senate which will stop the breeding of exotic cats for personal exploitation or their sale as pets," she explained. "I can't imagine why any lawmaker would hesitate to get this legislation passed."

In addition to being 'den mother" to her cat family, Hedren is matriarch of a well-known acting clan. Daughter, Melanie Griffith, and granddaughter, Dakota Johnson, are successful actresses.

"On Mother's Day, we all had dinner," recalled Hedren. "As I looked around the table, I was so proud of these beautiful and talented people."

While gratified by her family and work with animals, Hedren remains proud of her work on "Marnie."

"I'm glad the story is more understood and appreciated today," she said. "It was a fascinating role to delve into."