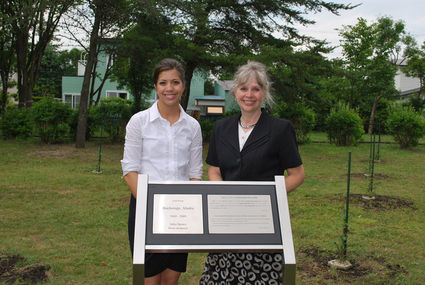 Miss Anchorage 2010, Abby Hancock, and Anchorage Sister Cities Commission Chair Charlene Howe unveil a plaque in Chitose's "Anchorage Park" in 2010, commemorating 40 years of friendship as sister cities. The plaque was accompanied by a gift of 40 Sitka spruce seedlings, to be planted in the park, where 40 trees donated in 1969 now stand tall.

Chitose is Anchorage's first and oldest sister city, dating back to 1969. Then-mayor Goerge Sullivan, father of today's mayor, was instrumental in establishing this sister city relationship.

To commemorate the 45th anniversary, the Anchorage Sister Cities Commission will host a free welcome reception Aug. 5 at the Wells Fargo Heritage Museum, 301 W. Northern Lights Blvd., from 7:30 to 9 p.m. Special guests at the welcome reception will include both cities' mayors, numerous Chitose honored guests, Consul Akira Iwanade of the Japanese Consulate in Anchorage, Miss Anchorage 2013 Sarah Cvancara, who will sing a special Japanese traditional tune entitled "Furusato" or "My Hometown," and Miss Anchorage 2014 Veronica Temple, who will sing "Alaska's Flag" State Song.

The following day, the Sister Cities Commission and Mayor Sullivan will host the Official 45th Anniversary Ceremony at City Hall, which will be followed by a special performance of the Yosakoi Soran Dance, performed by 10 students of the Chitose Institute of Science and Technology in costume. Yosakoi is a unique, highly-energetic style of dance that originated in Japan, combining traditional Japanese dance movements with modern music. The dancers will also perform at the Anchorage Pioneer Home, where the Chitose and Anchorage mayors and various delegation members will have lunch and visit with residents. Dancers will also perform at the Elizabeth Peratrovich Park on the corner of 4th & E, at 1 p.m.

The Anchorage Sister Cities Commission was established in 1970, and became a full Commission in 1972. Its formation formally recognized the importance of international cultural, sport, and educational exchange programs, as well as the value of industrial, economic, and business links. These relationships between Anchorage and other foreign cities are a means to foster mutual respect, goodwill, and friendship, creating a positive climate for economic cooperation and growth.

With the support of Sand Lake Elementary School's Japanese Immersion Program and Chitose Elementary School, the two schools began a student exchange program in 1994. The Chitose-Anchorage Friendship Association in Japan has been a strong supporter of this program. Students and chaperones from each school make trips to their respective Sister City in alternating years.

The entire delegation will travel to Seward via The Alaska Railroad for the day on Thursday, August 7. Their stops will include a special display at the Seward museum and the SeaLife Center.