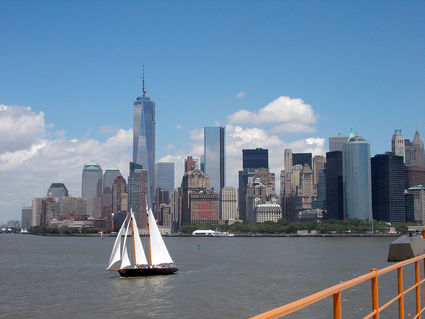 In 1995, I flew from Barrow to New York City on MarkAir for $200, and the pilot flew right down Fifth Avenue at night, over the Empire State Building, at a height where we could see people walking on the street. Neither is possible these days.

For sure it's a jump from the slow pace of Alaska to the big city, but it's worth it.

You'll appreciate the peace and quiet when you return home, because this city is never quiet - there's just levels of noise, from some guy turning his car alarm off and on to freak out people passing by, to the subway rumbling underneath and on out to traffic on the main arteries. Bring earplugs!

Noise aside, New York City is a really great place to visit. And yes, you can get anything, anytime you want.

The best way to introduce yourself to New York is by taking a double decker bus tour, and Grayline, a name all too familiar to Alaskans, offers many different options where you can buy tickets for 48 or 72 hours, and just hop on and off at the more than 50 stops throughout Manhattan and Brooklyn.

I love these buses, and always take them in whatever city I visit because they allow you a bird's eye view of the architecture and an overview of the people. In New York, it's all about the drama on the street where you can see lovers breaking up, making up or making out, on every corner. There's fights too. And you get to observe the latest fashions, and remember, as an Alaskan, you dress at least 10 years behind the times. You will wow your friends on your return with purchases from Bloomingdale's and Macy's.

As for regular transportation, I prefer the city buses to the subway, which I consider dangerous and dirty. People just seem lighter in spirit on the buses, and New Yorkers really are quite friendly. Plus, you're not subjected to the roving entertainers busking for dollars as they do on the subway-although they can be very good. Bus transportation also gives you a sense of the city and makes it easier to identify where you are and what anchoring points of reference can be seen - the Empire State Building or Central Park.

Do go and visit the statue of Balto in Central Park at East Drive at 67th Street. It's not in running pose like the one in Anchorage, but stands with chest nobly thrust forward atop a boulder.

Art till you drop

My favorite thing to do in New York City, aside from sampling pieces of pizza and the only true bagels made in the world whenever possible, is to walk the Museum Mile. I usually stay with friends in Spanish Harlem, and just walk over to Fifth Avenue and start out at El Museo Del Barrio, which showcases the art of New York's Latino population. A new museum, The Africa Center, called Africa's Embassy to the World, is now first in the walk, but has not opened yet.

Then on to the Museum of the City of New York, where you can learn everything about the city, and here find the cheapest admission - a mere $6. The Jewish Museum offers art exhibits and a permanent display detailing the history and culture of their people.

The Cooper-Hewitt National Design Museum is a treasure trove of contemporary and historic design founded in 1897. A branch of the Smithsonian, it's housed in the Andrew Carnegie mansion, and after renovations, will reopen in December. The National Academy Museum offers a wide variety of American and international art, but I have never visited. You can only do so much.

The Solomon R. Guggenheim Museum, with its iconic Frank Lloyd Wright architecture that commands the corner of Fifth Avenue and 88th Street, is filled with light and a rounded, sloped procession throughout - similar to the former State Museum's diorama display in Juneau. Although it always makes me dizzy, I adjust to its unique perspective because it's so worth the effort to view the museum's extraordinary 20th and 21st century collection.

Next up is the Metropolitan Museum of Art - it's huge and demands an entire day to digest all it has to offer.

If I have any legs left under me, I scoot around the corner at East 72nd Street and a couple of blocks up Madison Avenue to the Whitney Museum, especially if its Biennial Exhibit is up showcasing a guest-curated show of the best of contemporary American Art.

The Central Park Zoo is at 64th Street and Fifth Avenue, and if you have children with you, this might be a welcome relief for them from all the art. Or cross Central Park to the West Side at 79th Street for the American Museum of Natural History, a great place for them to see every dinosaur they could ever want. 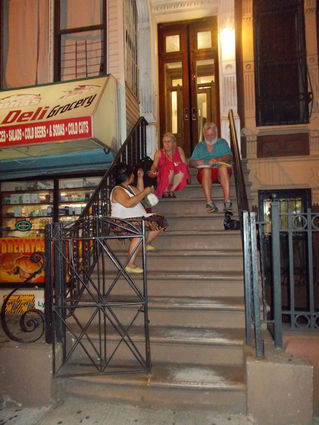 This is a very walkable city, so bring shoes that can take the beating of walking all day on cement. Do not visit over the Fourth of July holiday. Yes, the city is quieter because New Yorkers have fled to the beach, and with good reason – the city bakes in the 90-plus degree heat. For an Alaskan this means heat stroke. We did a forced march for miles last July 4th and I had to stop almost every block to rehydrate.

One free excursion is the Staten Island Ferry, a welcome cool trip in the summertime that gives a great view of the skyline and passes by the Statue of Liberty. I couldn't believe my eyes when I saw Arctic terns following the ferry, as the city does host some in the summer - should make an Alaskan feel right at home.