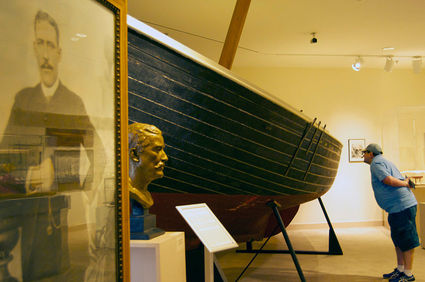 A visitor takes in the Cape Ann Museum's Fisheries and Maritime exhibit. The photo is of Howard Blackburn, who was fishing for halibut off the schooner Grace L. Fears of Gloucester, when he was stranded by a storm. Losing his heavy mittens, he curled his hands around the oars where they froze. Even without his fingers and one toe, he never declined an adventure. In 1879, he headed to the Klondike by the Yukon River route, but was not successful.

Long before Dutch Harbor became America's No. 1 fishing port, there was Gloucester, Mass. Visit here and you'll be pulled up short at how old it is and how young Alaska is in comparison.

Established as a settlement in 1623, a mere three years after the Pilgrims landed on Plymouth Rock, it incorporated 19 years later.

A tumbling, cheek-to-jowl town of windy streets and homes from lowly one-bedroom fisherman colonials to grand mansions, Gloucester has a rich history in fishing for the "sacred cod" - salted that is.

Putting out to sea in two-masted schooners, the fleet fished from Georges Bank off the coast or north to Newfoundland on the Great Bank.

In the mid-1800s, the fishery exploded with the arrival of Italian, West Indian, Canadian and Portugese joining the industry, resulting in at least 400 fishing vessels setting out. It was then that men fished off the schooners, hand-lining in dories.

"In a single storm on August 24, 1873, nine Gloucester vessels and 128 fishermen were lost," reports the Cape Ann Community Museum, which houses a historical fishing exhibit.

For a good idea of this fishery, watch the 1940s classic "Captains Courageous" with Freddie Bartholomew, Spencer Tracy, Mickey Rooney, and Lionel Barrymore that was filmed here, and definitely, "The Perfect Storm."

In recent years, fishing has faltered mightily and been subject to the same regulations as Alaska. With roots to 1849, even Gorton's of Gloucester, now owned by the Japanese company Nippon Suisan Kaisha, uses primarily Alaska pollock for its fish sticks, the smell of which wafts heavily through town. Gloucester used to reek of landed fish.

When I was a kid, some of these schooners still sat in the harbor, rotting, but many have been restored. Every Labor Day weekend for the past 30 years, Gloucester celebrates its own tall ships with the Gloucester Schooner Festival.

If you're a wooden ship lover, you must come here.

It gives goosebumps to see a fleet of schooners cutting across the harbor readying for the Mayor's Cup Race, and later, the Parade of Sails with accompanying cannon fire. Gets pretty cloudy with all the smoke, plus the fireworks.

This year, the Coast Guard Barque Eagle will participate along with 24 others. At 295 feet in length, the Eagle is the largest tall ship flying the Stars and Stripes and the only active square-rigger in the U.S. government service.

Gloucester has more than its maritime history to offer.

The seafood is great, especially the lobsters, or "lobstahs," as locals call them. There's been a glut of them bringing the price down to where specials are offered on every corner. And unlike the large Alaska oysters, East Coast oysters are smaller, brinier and sweeter.

Remember this is a town of immigrants, so Italian and Portuguese restaurants are excellent. And the pastry shops! Try a lobster tail filled with sweet cream and never crave a doughnut again.

And it was here that Birdseye perfected his frozen food. But don't think you'll be able to see the old factory because it's being torn down as I write this to make way for a hotel and cruise ships dock.

The folks here get excited when one cruise ship comes to town. If only they knew what it was really like!

This area is also renowned for its beaches of fine white sand that go on for miles.

There are museums here that celebrate Gloucester's history, art and industries. The Cape Ann Museum has just opened after a renovation, and is a small gem in the middle of town right next to the Gothic Victorian city hall that houses brightly painted WPA murals. There's even art on the sidewalks, mosaics tucked in among the cement or painted-in crosswalks and alleyways.

Rocky Neck, an outcrop of land, is the home to the oldest art association in the country, and is filled with studios and shops – and more restaurants.

The Gloucester Stage Theater, a local treasure, was co-founded in 1979 by award-winning playwright Israel Horovitz, as a "safe harbor for playwrights and new plays."

Music is also a big thing here, because here is where old rockers come to retire, but still rock out-Willy "Lobo" Alexander and John Butcher of John Butcher Axis can be seen strolling the streets. And when they get together, they're incendiary - sorry, borrowed a line from "Almost Famous."

Clubs are on the water or tucked into a corner at restaurants. Even churches open for concerts from folk to classical. 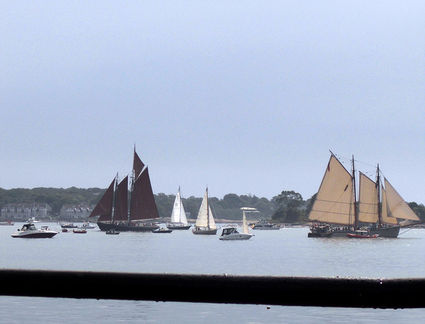 The blood red sails of the schooner, The Roseway, circles Gloucester Harbor during the Parade of Sails.

There are whale watch tours, a $10 all-day harbor shuttle, and a hands-on sea museum, Maritime Gloucester, a working waterfront museum that offers tours on the schooner Ardelle and displays of marine life and habitats. For the Schooner Festival, tickets can be purchased to be onboard for the race with tickets starting at $150.

"Glosta" was at one time an island when the drawbridge was up that allows large vessels to sail up the Annisquam River. Now Route 128, one of the oldest and narrowest highways in America, and surely a challenge for Alaskans to drive, now enters town over a high bridge spanning the river.

It's a very walkable town with lots to look at on every corner, and well worth the hours to get here. Fly to Boston and take the 45-minute train, which weaves through some old industrial towns and then rolls by seaside mansions.

Even snowy owls sometimes visit here in the fall.