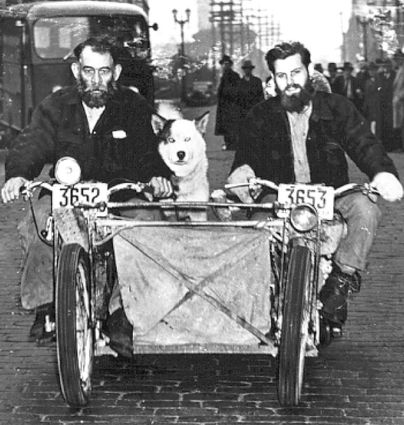 Clyde "Slim" Williams, left, and John Logan, along with their dog Blizzard, were the first to motor through the wilderness from Alaska to Seattle in 1939.

While workers completed the last portion of the Alaska-Canada Highway at Beaver Creek on Oct. 25, 1942, the idea to connect Alaska to the rest of the world was born many years earlier.

Donald MacDonald, a locating engineer with the Alaska Road Commission, had dreamed for years of an overland coastal route to Alaska. It would run north from Seattle across British Columbia through the Yukon Territory to Fairbanks.

MacDonald and a group of Fairbanks residents formed the International Highway Association Inc. to sponsor the building of such a road. Citizens of Alaska and Canada lobbied for years without success.

In the early 1930s, MacDonald and the Automobile Highway Association helped finance Alaska prospector and trapper Clyde "Slim" Williams to make a trip over the proposed coastal route.

Williams left Fairbanks with a team of part-wolf dogs in November 1932. Following crude maps drawn by MacDonald, he and his dog team trekked through the wilderness and made their way to Seattle in five and a half months. He then rigged his sled with Model-T wheels and headed east, 2,000 miles, to the Chicago World's Fair, where he and his dogs were a big attraction.

When the fair ended in October 1933, Williams and his dog team mushed on to Washington, D.C., where they camped in a city park and met with Alaska's delegate, Anthony J. Dimond, and other members of Congress. He also briefed President Franklin D. Roosevelt on the proposal for a road.

Years later, Eleanor Roosevelt would say that Williams was a most vocal advocate for the Alaska Highway.

Soon after Williams' visit to the nation's capitol, Dimond introduced a bill into Congress for a highway. He found no support.

But in 1938, Roosevelt appointed the Alaska International Highway Commission to make a study of routes through the northwest.

It submitted a favorable report and surveyed several routes, including Route A, MacDonald's coastal route. It started at Prince George and traveled through Atlin, Whitehorse and along the Tanana Valley to Fairbanks. Route B, which also started at Prince George, traveled up the Rocky Mountain Trench to Watson Lake, then on to Dawson City, down the Yukon River and connected to Fairbanks.

But plans for a highway again were tabled due to high construction costs and concern over what impacts a roadway might have on the northern territories.

Williams again made a trip south in 1939 to gain support for the highway. He and adventurer John Logan, along with their dog, Blizzard, left Fairbanks on May 14 aboard specially modified motorcycles with extra gas cans attached and headed down the same path Williams had traveled a few years earlier.

They followed pack trails, forded streams and muscled through muskeg to cover 2,300 miles in six and a half months. Williams later said that he and Logan never missed a meal – but sometimes they got a few meals behind.

The team arrived in Seattle in early December. They were introduced at a Chamber of Commerce meeting as the first men to motor across the proposed Alaska International Highway.

Their journey again raised the idea of carving a road to Alaska, but the bombing of Pearl Harbor by the Japanese on Dec. 7, 1941, made building that road a reality.