Take a walk on the wild side, or just take a walk 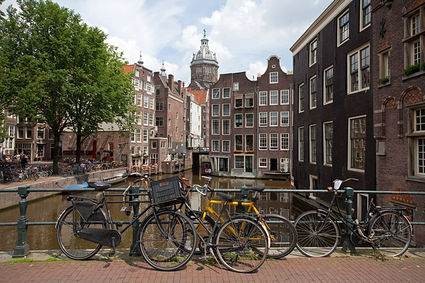 Canals, bikes and endless quaint streets can transport you through Amsterdam.

Sex, drugs and great museums are what this city is all about. You can either be a traditional tourist and take in the Rijksmusem or the van Gogh museum, or go off the chart and cruise the Red Light District, where the women and men are displayed in windows of what we Alaskans would call "cribs."

With its hash and marijuana coffee houses, Amsterdam has a racy reputation. This is an ultra-liberal city. As one Dutch friend once said to me, "We were glad to see the Pilgrims leave, they were boring."

But there is its other side of tulip farms, great food, boat trips on the canals, and culture.

Rightly called the Dutch painters of the Golden Age, the works of Rembrandt and Vermeer depict daily life of their times with exacting realism. The Night Watch, 11' 11" x 14' 4", is Rembrandt's largest piece and is quite overwhelming to view.

For more light and whimsy, visit the van Gogh Museum, which houses the largest collection of his paintings. Here are the well-known iris, wheatfields and self portraits that show his growth of technique from the dark and depressing "Potato Eaters" of 1885 to the whimsical and modernistic strokes of "The Sunflowers" from 1889 - an artistic leap of a mere four years.

The Anne Frank House is also here, near the city's center, where she was in hiding from the Nazis and wrote her unforgettable diary. It is a sad, sobering look at the madness to which a people can descend in the name of nationalism. Sadder still is that we seem to have learned nothing from it.

This is a walkable city, something I always enjoy when traveling, giving me a chance to recover from jet lag, get some exercise and see a city as it's meant to be seen - on foot.

But I warn you, beware of the bicyclists. They have right of way before pedestrians and have their own lane right off the sidewalk curb. They do not give quarter. So look before you cross the street, or join their ranks and rent a bike.

Dutch architecture tends to narrow and high to accommodate the most number of people possible in a small space.

This is a tiny country, but everything is well thought out. For instance, urban sprawl is avoided by the regulation that so many acres of farmland must be allowed per development, so that cows and fields marble the cities.

Canals crisscross the country and traveling by boat or cruising by barge is another way to see the city and beyond.

And when the canals ice over, as in Alaska, they become highways and places to play. Many of us may remember the children's book "Hans Brinker" or "The Silver Skates," the story of a young Dutch boy who hopes to win a race and the reward of silver skates. The book introduced the sport of Dutch speed skating to America. Still a popular sport in its home country, each winter the Elfstedentocht, or the Eleven Cities Tour, is an almost 120 mile-long tour held both as a speed skating match of 300 entrants and a leisure tour of 16,000 skaters.

Held in the province of Friesland in the north of the Netherlands, it passes all 11 historical cities in the province. The tour is usually held once a year, but only when the ice along the entire course is at least 6 inches thick. But you have to be quick to join this race as it's announced and starts within 48 hours.

April through mid-May is a prime time to cruise on a barge through Holland to view blooming tulips, the country's No. 10 export, after mineral fuels, including oil, machinery, electronic equipment, organic chemicals, plastics, optical, technical and medical apparatus, pharmaceutical products, vehicles - excluding trains and streetcars – and iron and steel.

Tulips have a long and fascinating history here.

Cultivated in the Ottoman Empire, now Turkey, tulips were imported in the 16th century. Humanist, physician and botanist Carolus Clusius, also known as Charles de l'Ecluse, 1526-1609, wrote the first major book on tulips in 1592. People loved them so much they raided his garden and made off with bulbs. 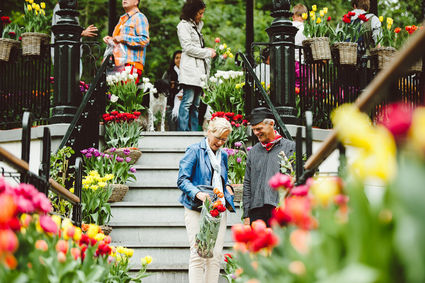 Tulips, tulip, tulips! Be dazzled by the endless varieties of Holland's best-known export.

By the mid-17th century, tulips were so wildly popular they created the first economic bubble, known as "Tulip Mania." As more and more people bought the bulbs, they became so expensive that they were used as currency until the market in them crashed. Another event we seem not to have learned from.

There are now 76 species of tulips, and they can be viewed in the numerous outdoor flower markets in Amsterdam or on farms laid out in rainbow colors.

Sit back and watch humanity flow by

When you tire of trooping around, pick out a busy square, find a coffee house with tables outside. The Dutch lay their coffee lovingly on a doily, with a couple of sugar cubes and complimentary cookies. The coffee is a mellow roast, none of that battery acid French roast!

The Dutch are very fashionable. Who knows, you might bring back a trend that could catch on in Alaska. Well, maybe not.

A great website to find out everything you need to know is http://www.holland.com.