Mexico's island in the sun 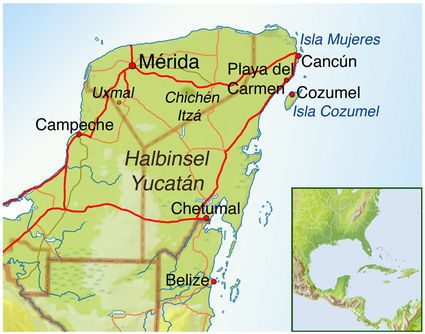 Cozumel is off the Caribbean coast of Mexico in the State of Quintana Roo, and south of the tiny island of Isla Mujeres, or Island of Women, which is also worth a visit if you want a place with even less tourism than Cozumel.

Perhaps you've been avoiding Mexico because of drug cartels and kidnapping, but here's one destination far away from all that.

Floating in the Caribbean Sea along the eastern shore of the Yucatan Peninsula is Cozumel. Small and easy to get around, it's only 30 miles long and close to 10 miles wide, yet oddly enough, is Mexico's largest Caribbean island. It has a population of 77,000, mostly living in the main city of San Miguel.

The island is in the Mexican State of Quintana Roo - just say that several times and see how it trips off the tongue.

Warm water and lots to see

The island boasts the best barrier reef after Australia's Great Barrier Reef and is a glorious place to snorkel and dive in the Cozumel Reefs National Marine Park.

Pick any beach and swim a short distance offshore and be amazed by the intricate web of life. My niece, when confronted with a big angelfish, started screaming underwater with her mask on. It was hilarious. And I got vertigo when I looked down and the ocean floor dropped away. It was an experience we still talk about today.

Cozumel is also pockmarked with cenotes because it's based on limestone, and when the stone collapses, deep holes form and fill with ground water. Only certified divers are allowed to dive into these caves. In the early 1990s divers found the world's fifth largest underwater cave in the world.

They're very cool to look down into, but they seem creepy to me.

Other watersports are available, like parasailing, kite surfing, glass-bottom boat tours, and even a submarine that takes tourists out to see the marine life.

Iguanas are all over the place, even on the beach. It's like having small dinosaurs about. And while I looked for scorpions, much to my family's alarm, I never found one.

San Miguel has stores that offer luxury goods to Mexican silver jewelry to indigenous crafts. It can be dizzying trying to decide which sterling silver hoop earrings to buy.

San Miguel even has a chocolate factory, Kakoa Chocolate Factory, and for a mere $10 a person you can learn how to make chocolate cocoa mix using a Mexican chocolate mill and take the mix back home.

Better still, take a free tequila tour! At Casa Mission they will show you the best way to drink it, taste eight different tequilas and learn how it's made. You can also dine here al fresco out on the veranda of this hacienda-style restaurant.

Most exciting of all, you can buy forbidden Cuban cigars. Remember to smoke them there and not bring them into the U.S., or they will be confiscated at U.S. Customs. My favorite is the Monte Cristo, mildly smoky and aromatic, it comes in an individual tin so you can smoke some and save some. Havana Bob's Cuban Cigars is the destination for the cigar aficionado.

Also keep in mind that coral jewelry is listed on the U.S. State Department's list of wildlife and wildlife products to avoid because it's endangered, and you can be fined and the coral confiscated at Customs.

Getting out and about

Because Cozumel is so small, many people choose to rent a motor scooter, bicycles, or hail a taxi. Remember that the Mexican style of driving is combat-style and be aware of the rules of the road and keep a sharp eye out. Unless you've just come from the tequila tour, in which case let someone else drive.

While the official tourist website http://www.cozumel.travel assures the visitor that it is much like mainland driving, right on red and seatbelts being required, your brain will explode with these driving instructions:

"Traffic from north to south across the island has the right of way, so it doesn't stop. Traffic from east to west will have to stop at every intersection until the north-south traffic has passed. You'll pick that up right away. There is one road you'll want to remember. It runs to the south end of the island, along the east coast, and back through the center into downtown. Easy, right? So really, there's nothing keeping you from every square inch of adventure on Cozumel." Happy trails.

Ferries take you to the mainland where you can explore Playa Del Carmen. To see the ruins of Tulum, a three-hour tour will include ferry, van ride and a tour of the site. It's really worth it if Chichen Itza isn't on your itinerary.

One of the last Mayan settlements, Tulum sits atop stone walls looking east to the Caribbean Sea, and was settled over 800 years ago and thrived until the Spanish brought disease. 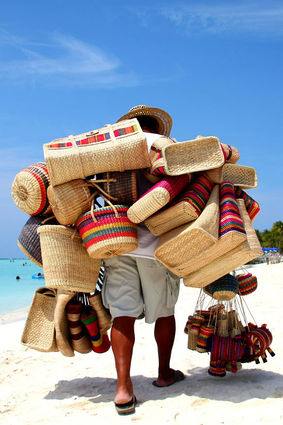 The stores come to you on the beaches of Cozumel in the form of friendly vendors with colorful wares.

I did a tour of the ruins at a time when you could climb up the main temples and down with the help of a heft chain. That's not allowed any more.

Bring plenty of water to drink as it is very hot and arid - I was close to dehydrating - and a hat to ward off sunstroke.

Do drink only bottled water or risk Montezuma's Revenge. Although this is a relatively easy way to lose weight – I lost 8 pounds in one week – the crawling to and from the bathroom is somewhat humiliating.

Acidophilus pills washed down with milk and eating lots of yogurt with active cultures did the trick, but one family member did get bacteria lodged in their intestines and had to have intravenous antibiotics. Also watch what you wash your fresh fruit with.

Other than all that, and don't let it deter you, the food is great, and of course, 100 percent authentic.