Chalk it up to experience, opportunity and effort 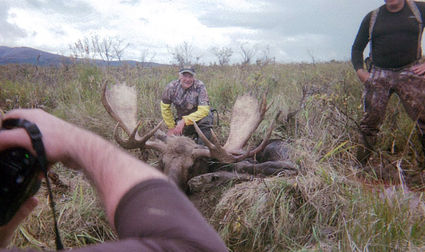 Leonard Kelley poses with a moose he took in September.

I have been harvesting moose for over 40 years. When I first began moose hunting my technique was simple-I would sit in a field and wait. In time I learned how to call and when to be in the field. Simply stated, the best time to hunt moose is after Sept. 12, when the bulls are in full rut and looking to mate. I also limit my time in the field to five hours in the morning and at night. Moose are less active during the day.

This year we were to hunt Unit 18, which is located in the Yukon-Kuskokwim Delta National Preserve. I flew from Anchorage to Bethel. In Bethel, I met my hunting buddies and we flew to a lake in the preserve. There were four hunters, including myself.

The following morning we flew our party and gear to the hunting area, where we set up our camp. Camp would consist of two six-man tents and a 14-foot cook tent. We would sleep two to a tent and have plenty of room for our gear. The cook tent had a small propane stove, table and chairs.

One cannot hunt the same day as airborne so after the camp was set up, we ate and went to bed.

On the second day I took one of my buddies, who was bow hunting, and went south of camp several hundred yards. I started calling and got responses. Within a short while, a bull was responding and scraping his horn but would not come in. We moved another 50 or so yards and situated my buddy 30 or 40 feet from me, where he could get a shot if a moose responded to my call.

Within minutes a bull started walking across the field about 50 yards from me. My buddy did not get a shot and we let it go. We would see more and we hunted for a few more hours that morning but could not get a bull to come in. That evening we made plans for the next day and decided that my buddies would hunt further from the camp, where there was a good sign. I would hunt alone.

Over the years I have learned to be patient and not shoot a moose more than a quarter mile from a water pack out point.

On the third day we got up, had coffee and oatmeal then started our hunt. I hunted around the lake in the morning without success. I went back to camp, had lunch, got a chair and started reading a book about the Second World War. I called very little, figuring that the evening hours would be more productive.

Around 7:30 p.m. I started calling and took a break to cook my mountainhouse dinner. I went back to my chair, made another call and started eating when I saw a bull about 150 yards away. I put my dinner down and went back to the cook tent to get my 30-06 rifle. Looking through binoculars I determined the bull had antlers in excess of 55 inches, so I decided I would harvest it.

I gave another call, the bull stopped and I shot him in the heart area. The bull fell and immediately got up. I shot again. He was down.

I put on my boots, gathered my knives and started out. I did not realize it but it was quickly getting dark. As I walked out to find the moose, my buddies were already there with their lights on. How they got there before me is still a puzzle.

The bull turned out to have 58 inch antlers and in good physical shape. It was getting dark so I knew we could not pack that night. I proceeded to cut off the front and rear quarters and gutted the bull. With the two quarters off and gutted, the meat would cool over night. If a hunter leaves a moose in the field overnight without opening it, the heat from the moose will literally cook the meat, hastening the decomposition process.

We went back to camp and had a couple of drinks, ate dinner and went to bed.

The next day we packed the moose back to camp and hung it in a tree where I skinned and bagged it. On the fourth day another moose was harvested about two miles from camp but next to a lake which was big enough for a float plane to land. As luck would have it, there was a plane in the area which would pick up both moose and take them to Bethel. Once the moose was in Bethel, the pilot took my moose meat to Northern Air Cargo to ship back to Anchorage, where it was stored in a chill box until I could pick it up.

On the fifth day I stayed at camp and read, but my buddies went to hunt a new area. Luck was with them and the youngest member of our group shot a nice bull with 62 inch antlers. The moose was shot next to a float plane accessible lake, eliminating the need for a long difficult pack. That evening we celebrated and made our pick-up plans.

The pilots stated that they would pick us up the next day around 1 p.m. The plan was that we would dismantle most of the camp in the morning, then two of my buddies would hike over to the lake with the moose, load the moose on the plane and fly to Bethel.

My other buddy and I would finish taking down the camp and ferry the gear to the lake for the plane to haul back to Bethel. Everything went off well and we all met up in Bethel, had dinner and I took the evening jet to Anchorage.

The next day I drove over to Northern Air Cargo and picked up my meat. I took the meat home and hung it in the detached garage. Moose meat should hang for about 10 days, allowing the meat to set up and break down. The process is called tenderizing and makes for some tasty eating.

After the hanging process, I cut the quarters into roasts and stew beef. I took the trimmings to a processor to be made into burgers and sausage. The next step is the eating.

I know that one day I will have to give up harvesting moose. But hopefully that day is several years away. In the meantime I want to encourage seniors to stay in the game, stay active and hunt. You would be surprised at the number of younger folks who will hunt with you for the benefit of your company and experience.

Len Kelley is the board president for Older Persons Action Group, Inc.